G.K. Chesterton, Our Model for Engaging in a "Boisterous Argument with [our] Times!" 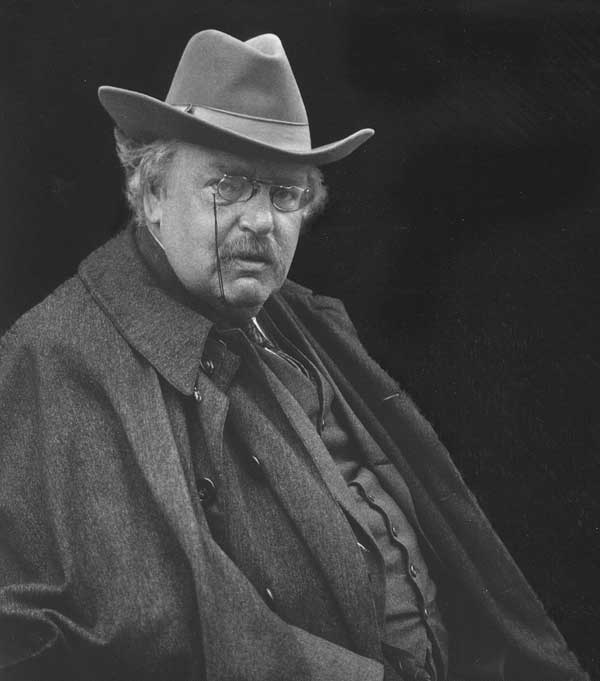 I was recently reading an article on Chesterton. With my dimwitted memory I can't remember the author, but he made such an interesting statement I think I will remember it forever. He wrote that Chesterton engaged in a "boisterous argument with his times." Everything Chesterton said or did was bigger than life, so of course, his arguments would be "boisterous." But they were never mean or ugly or bitter and always, like Socratic dialogue, were a search for truth.

I'm sure regular readers of the blog won't be surprised that I'm going to digress into the word's etymology here. The origin is a little obscure. Boisterous is being used in the 15th century with a meaning of "rough" or "coarse" and may come originally from the Middle English boistous.  That definition (circa 1300) means "rough, coarse, clumsy, and violent." But again, that's a wordsmith's guess. Another guess is that its origin comes via Celtic to the Latin bestia meaning animal or beast. Since one definition of boisterous is "high animal spirits" that makes some sense.

At any rate, the modern meaning is less pejorative than earlier on. One of Merriam Webster's definitions is  "marked by or expressive of exuberance and high spirits." That certainly can be appropriately applied to Chesterton. I had to laugh at one of the obscure meanings which was "massive." That certainly defines Chesterton as well! As for "rough, coarse, or violent," no way can those be applied to a man who was, in spirit, a model of chivalrous knighthood. (I certainly can't imagine him in a knight's armor astride a horse. That thought makes me laugh. But I can definitely imagine him, like St. George, fighting off a dragon with his walking stick.)

We are living in times characterized by bestia, so engaging in a "boisterous argument with our times" can hardly be avoided. The beasts are everywhere, and you need to have "boisterous" argument when a beast is attacking you. If you must battle with beasts, a little rough and violent action is sometimes necessary, say a good whack with a stick. You can't tame a wild boar or a charging bull by petting him and speaking soft and soothing words in his ears, that's for sure.

So let us be determined to give "boisterous" arguments against the enemies of God but with "exuberance and high spirits" that keep us cheerful in the midst of evil. Think of the martyrs in the coliseum who went into the ring singing. As for the midterms, the left with their mail in voting and no ID at the polls, are likely to provide another example of massive cheating in November. And the drive-by media will cheer them on. "Put all those election deniers, enemies of the democracy, domestic terrorists...in jail!"

I wonder...will FBI agents be knocking on my door for saying that I believe the Left stole the 2020 election? Bring it on, boys! As Thoreau once said, “In an unjust society the only place for a just man is prison.” I didn't enjoy my three experiences of prison (in Alexandria, Arlington, and Buffalo) for defending God's precious unborn babies, but I never felt more free. Maybe I'll explain that in another post. May we all put on the armor of Christ and defend the faith against the bestia in both the world and the Church.

Posted by Mary Ann Kreitzer at 5:34 AM

"And the drive-by media will cheer them on. "Put all those election deniers, enemies of the democracy, domestic terrorists...in jail!""

Or, to death Mary Ann - as MSWinters at the catholic(?) reporter says:

“To my friends in the Republican political and legal establishment who have not stood up to Trump: When the revolution comes,” he wrote, “you are on your own, and I will be clamoring not for mercy but for a seat next to the guillotine, where I can do my knitting.”

Will there be more than a few on the Catholic Left who will cheer while they jail/kill us just like they did St. Joan of Arc?