Pope Francis and the Eucharistic Miracle

Today is the Feast of the Sacred Heart. Over the millenia the Church has documented many Eucharistic miracles. But the one described below is particularly significant because our current Holy Father Pope Francis oversaw the investigation himself. This miracle converted the cardiologist who examined the heart tissue and made the report. Most Sacred Heart of Jesus, pray for us. O Jesus, meek and humble of heart, make my heart like unto thine.


Pope Francis A Witness To A Eucharistic Miracle! 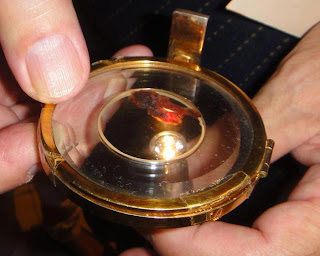 In 1996 in the Archdiocese of Buenos Aires, Argentina, when the present Pope Francis was Auxiliary Bishop under Cardinal Quarracino, an amazing Eucharistic miracle took place. He himself had it photographed and investigated and the results are astonishing. At seven o’clock in the evening on August 18, 1996, Fr. Alejandro Pezet was saying Holy Mass at a Catholic church in the commercial center of Buenos Aires. As he was finishing distributing Holy Communion, a woman came up to tell him that she had found a discarded host on a candle holder at the back of the church. On going to the spot indicated, Fr. Alejandro saw the defiled Host. Since he was unable to consume it, he placed it in a container of water and put it away in the tabernacle of the chapel of the Blessed Sacrament.

On Monday, August 26, upon opening the tabernacle, he saw to his amazement that the Host had turned into a bloody substance. He informed Bishop Jorge Bergoglio(Now Pope Francis, Auxillary Bishop that time), who gave instructions that the Host be professionally photographed. The photos were taken on September 6. They clearly show that the Host, which had become a fragment of bloodied flesh, had grown significantly in size. For several years the Host remained in the tabernacle, the whole affair being kept a strict secret. Since the Host suffered no visible decomposition, Cardinal Bergoglio(Who became Archbishop by that time) decided to have it scientifically analyzed.

On October 5, 1999, in the presence of the Cardinal’s representatives, Dr. Castanon took a sample of the bloody fragment and sent it to New York for analysis. Since he did not wish to prejudice the study, he purposely did not inform the team of scientists of its provenance(the source of sample was kept secret to the scientists). One of these scientists was Dr. Frederic Zugiba, the well-known cardiologist and forensic pathologist. He determined that the analyzed substance was real flesh and blood containing human DNA. Zugiba testified that, “the analyzed material is a fragment of the heart muscle found in the wall of the left ventricle close to the valves. This muscle is responsible for the contraction of the heart. It should be borne in mind that the left cardiac ventricle pumps blood to all parts of the body. The heart muscle is in an inflammatory condition and contains a large number of white blood cells. This indicates that the heart was alive at the time the sample was taken. It is my contention that the heart was alive, since white blood cells die outside a living organism. They require a living organism to sustain them. Thus, their presence indicates that the heart was alive when the sample was taken. What is more, these white blood cells had penetrated the tissue, which further indicates that the heart had been under severe stress, as if the owner had been beaten severely about the chest.”

Two Australians, journalist Mike Willesee and lawyer Ron Tesoriero, witnessed these tests. Knowing where sample had come from, they were dumbfounded by Dr. Zugiba’s testimony. Mike Willesee asked the scientist how long the white blood cells would have remained alive if they had come from a piece of human tissue, which had been kept in water. They would have ceased to exist in a matter of minutes, Dr. Zugiba replied. The journalist then told the doctor that the source of the sample had first been kept in ordinary water for a month and then for another three years in a container of distilled water; only then had the sample been taken for analysis. Dr. Zugiba’s was at a loss to account for this fact. There was no way of explaining it scientifically, he stated. Also, Dr. Zugibe passionately asked, “You have to explain one thing to me, if this sample came from a person who was dead, then how could it be that as I was examining it the cells of the sample were moving and beating? If this heart comes from someone who died in 1996, how can it still be alive?

Then did Mike Willesee inform Dr. Zugiba that the analyzed sample came from a consecrated Host (white, unleavened bread) that had mysteriously turned into bloody human flesh. Amazed by this information, Dr. Zugiba replied, “How and why a consecrated Host would change its character and become living human flesh and blood will remain an inexplicable mystery to science—a mystery totally beyond her competence.”

Then Doctor Ricardo Castanon Gomez arranged to have the lab reports from the Buenos Aires miracle compared to the lab reports from the Lanciano miracle, again without revealing the origin of the test samples. The experts making the comparison concluded that the two lab reports must have originated from test samples obtained from the same person. They further reported that both samples revealed an “AB” positive blood type. They are all characteristic of a man who was born and lived in the Middle East region.

Only faith in the extraordinary action of a God provides the reasonable answer—faith in a God, who wants to make us aware that He is truly present in the mystery of the Eucharist. The Eucharistic miracle in Buenos Aires is an extraordinary sign attested to by science. Through it Jesus desires to arouse in us a lively faith in His real presence in the Eucharist. He reminds us that His presence is real, and not symbolic. Only with the eyes of faith do we see Him under appearance of the consecrated bread and wine. We do not see Him with our bodily eyes, since He is present in His glorified humanity. In the Eucharist Jesus sees and loves us and desires to save us. (Archbishop Bergoglio became a Cardinal in 2001, this miracle was published after many researches, by that time he became a Cardinal, that's why he is addressed as cardinal in this post) Also watch http://www.youtube.com/watch?v=APz1v8oz1ms where Dr.Castanon, Atheist turned Catholic explains this miracle!
Posted by Mary Ann Kreitzer at 10:36 AM

Thank you so much for posting that!
God bless!