Feast of the Holy Family: It All Begins with Marriage 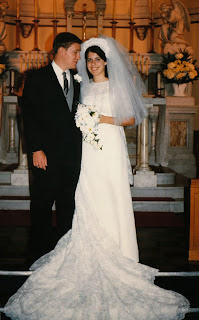 Today we celebrate the Feast of the Holy Family which really began at the betrothal of Joseph and Mary. In the Jewish tradition, the betrothal was the marriage ceremony. That's why, when Joseph wasn't sure he was part of the plan, he intended to "divorce" Mary quietly. She was NEVER an unwed mother. Neither were they "homeless" when Jesus was born. Their family was firmly grounded from the start although it was a difficult one because of outside circumstances. In fact, they lived in the shadow of the cross from the very beginning.

So when I read the article below, I was fascinated by the marriage custom that recognizes just that -- we are married in Christ crucified:


Married on a Crucifix
Imagine a world without divorce. Imagine families without separation. Imagine no children or hearts torn apart.
by Michael Mullan, LC | Source: Catholic.net

Imagine a world without divorce. Imagine families without separation. Imagine no children or hearts torn apart.

People of one place in this world do not have to imagine.

In the town of Siroki-Brijeg in Herzegovina not one of the 13,000 inhabitants can recall a single divorce or broken family.

What is their secret? One look at their marriage rite says it all.

When the bride and bridegroom go to the church to be married they carry a crucifix with them. The priest blesses the crucifix and exclaims, “You have found your cross! It is a cross to love, to carry with you, a cross that is not thrown off but rather treasured.”

When they interchange the marital vows, the bride puts her right hand on this crucifix and the groom puts his right hand over hers. Both are united to the cross. The priest covers their hands with his stole while they pronounce their promises to love each other in good times and in bad.
Then they both first kiss the cross, not each other. If one abandons the other, they abandon Christ on the cross....

Larry and I will celebrate our 45th wedding anniversary next October and I think this would be a wonderful part of a vow renewal. As we get older we are more aware of the cross. We see friends struggling with terminal illness of a spouse or the pain of seeing children divorce or abandon the faith. It's not to late to be "married on the crucifix" and call on our Lord to keep us united in Him. Wouldn't it be wonderful if all priests preparing couples for marriage would encourage them to make this custom part of their wedding ceremony.

Labels: Feast of the Holy Family, Married on a Crucifix, The family that prays together stays together