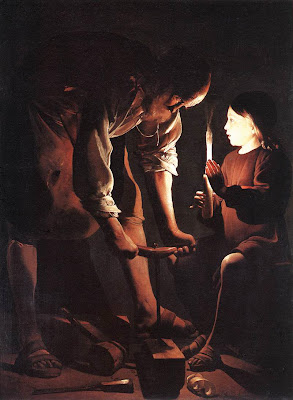 He's the quiet man of Christmas isn't he? We read in Luke that Caesar Augustus calls for a census and that all the men have to go to their town of origin and St. Joseph is of the House of David which requires him to go to Bethlehem. But we hear not one word about what Joseph thought or said. We just know he took Mary and went to Bethlehem where they were turned away from the inn and ended up in a stable or a cave where the animals were kept. What did Joseph and Mary talk about on that long journey to Bethlehem? When they camped at night and looked up at the starlit skies what did they think? We know that Mary pondered things in her heart so they probably didn't prattle on about nothing and I seriously doubt they were gossiping about their neighbors. Did they talk about the mystery of what was happening? Or were they silent like I am when I sit before the monstrance at adoration? What did St. Joseph say to Jesus as He grew? What did they talk about in the carpenter shop as Joseph showed Jesus how to use the tools? What funny stories did he tell? Did he describe the patriarchs and make animal noises when he told Jesus about Noah and the ark?

I plan to think about St. Joseph during these last days of Advent - maybe study his image in art and ponder what this just man was like and what he must have said to Jesus during all those days they spent together. He must have been amazing. After all, like Mary, he was chosen by God for a special role in the Messianic plan. I look forward to asking him about it one day.