More Bad News from the Vatican.... 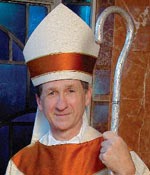 ....for the Church in the United States.  AmChurch is ecstatic!

Orthodox Catholics in the U.S. better hold onto their rosaries. Chicago is the third largest See in the U.S., home of "seamless garment" champion Cardinal Joseph Bernardin who often spoke with a forked tongue. Bernardin was notorious for affirming Church teaching in one breath and undermining it in the next. Time will tell whether Cupich is a Bernardin clone.

Here are some big reasons to pray for Chicago and the Church in the U.S. and add this appointment to the list of growing concerns about Papa Francis:

In 2011 Bishop Cupich instructed his priests and seminarians not to participate in prayer vigils or the 40 Days for Life campaign at Planned Parenthood and other abortion mills. Apparently, seminarians were even instructed not to go in plain clothes to pray the rosary. Ironically, the U.S. bishops' pro-life secretariat praises 40 Days for Life. Not Bishop Cupich! His instruction had a chilling effect on priests in the diocese participating in these types of events. (Source)

The Huffington Post is chortling that Cupich's appointment could "upend decades of conservative dominance of the American hierarchy." They also report on a pastoral letter he wrote during the battle over same-sex marriage with the implication that opponents are vicious bigots. No such warning about the vicious actions of gay activists:

In a pastoral letter read from all the pulpits in the diocese, Cupich defended the church’s position against same-sex marriage but he called for a respectful debate and he forcefully condemned any attempt “to incite hostility towards homosexual persons or promote an agenda that is hateful and disrespectful of their human dignity.”

“It is deplorable that homosexual persons have been and are the object of violent malice in speech or in action,” Cupich wrote. “Such treatment deserves condemnation from the Church’s pastors wherever it occurs.”

NPR is also chortling over the naming of a "moderate" and social "progressive," strange since they also call him a "conservative." (Source)

Labels like "conservative" and "progressive" mean nothing to me. I'm interested in orthodoxy and the defense of God's "least ones." Cupich is immediately suspect for undermining prayerful opposition to the murder of babies waiting to be born. Jesus defended the "least ones." A bishop who tells his clergy NOT to defend them is seriously suspect.

And just think, he will no doubt get a cardinal's red hat and be eligible to vote in the next papal conclave. And he's only 65. God help the people of Chicago and the Church in America. It could be a long road ahead. And if this indicates the direction the pope is taking with hierarchical appointments, well, watch for bishops like Mahony, Dolan, Adamec, and Bernardin in the future. Keep praying!
Posted by Mary Ann Kreitzer at 2:00 PM

What's really interesting is that Cupich is leaving at the same time Driscoll is retiring from the Idaho diocese. We will be getting two new bishops within spitting distance of each other.

Since I live a few miles from the Idaho/Washington border just east of Spokane, I follow both closely.

The Chicago Diocese is my Diocese. And yes, I fear this will trickle thru the Country. We all need to pray our Rosaries daily. I fear this is an attack of the greatest magnitude on our Church.

I also read on one article (cannot remember where, by now, I have read many!) that for a time he banned Eucharistic Adoration in Spokane. And he is gung ho to 'revise' the liturgy of the Novus Ordo Mass, as according to him, we didn't go far enough with Vat ll. Maybe someone here can verify for me. One thing I know....he CANNOT take our Rosaries away.