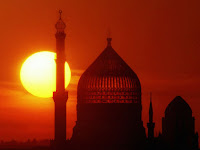 Today we started a new page on our site linking to most of our articles on Islam. (See the sidebar.) Many Muslims, probably most, are not out to kill their next door neighbors. However, they also are not willing to condemn the violence that their leaders espouse based on the Koran. If you read these articles you will recognize exactly how evil Islam is. It is a religion (and political belief system) of domination. When the Muslim population of the U.S. reaches a tipping point, Islamic leaders will work to subjugate our Constitution and replace it with Shariah Law.

That is why the Church fought Islam for over a thousand years. Have we forgotten already the Crusades that prevented the Turks from overrunning Europe, the Battle of Lepanto that saved Europe once again? The Armenian genocide of 1915, only 100 years ago and the dozens of other Muslim/Christian conflicts? Must we relive the slaughter in the name of political correctness?

Wake up, feminists. Under Shariah Law women are second class citizens subject to male domination even murder by stoning. Wake up, liberals. Under Shariah Law, your right to free speech, your ability to commit fornication, adultery, and sodomy without consequence, is nonexistent. Wake up, LGBTQ activists, Islam calls for your execution. Wake up, Bishops. You are putting the flock at risk of persecution, slavery, and martyrdom.

There is a Great Satan, and his name is Allah. Those who say Islam and Christianity worship the same God believe that God can contradict Himself. He can't. He doesn't instruct one set of believers to kill the infidel where they find them and another set of believers to love your neighbor as yourself. These foolish people deny the very nature of God as a Trinity of love. God can't be a Unitarian and a Trinity at the same time. Use these articles as a primer on Islam.

Pray for our Islamic neighbors, but don't enable them. The answer to Islam is evangelization and conversion. But since there is no freedom of religion in Islam, those who convert are subject to death for blasphemy.

Reality........we are witnessing the death of free speech in Europe over the question of Islamic immigration
http://www.breitbart.com/london/2016/04/07/police-raid-social-media-posts/
https://jonathanturley.org/2016/03/25/englishman-arrested-after-posting-anti-muslim-views-on-twitter/
While the Christian symbol of the Cross is under attack here
http://www.washingtontimes.com/news/2016/apr/7/christian-cross-ordered-off-los-angeles-county-sea/

As the Church goes, so goes the world even if it means embracing a Jewish Freemason who praised Fidel Castro or the anti Christian religion of Islam.

"The synod experience also made us better realize that the true defenders are not those who uphold its letter, but its spirit; not ideas but people; not formulas but free availability of God’s love and forgiveness,” Pope Francis said. “I see in Senator Bernard Sanders a man of great integrity and moral conviction, who understands these principles and genuinely wants what’s best for all people.” - See more at: http://nationalreport.net/pope-francis-endorses-bernie-sanders-president/#sthash.8Ol2fS6v.dpuf
Once again...........As the Church goes, so goes the world.

Off topic ..why has Bernie been invited to the Vatican ? It is being reported the Pope invited him.
It is being reported the Pope said he is our most Christian candidate and there are other reports they are all hoaxes. Perhaps Pope Francis wants these false reports stopped?
Still one wonders how it is that a Pope invited a Free Mason Jewish American Presidential political candidate who is a Socialist and who praised Fidel to the Vatican, while Mr Trump's wall proposal and anti illegal immigration platform warrants him Papal condemnation.

Here's the explanation for the Bernie /vatican communist agenda
Make sure you click on this Vatican twitter account below if it jumps to a Bernie site just go back!

I know it's not RC but RC Sproul's "Renewing Your Mind" website started a new series on Islam today. The 26 min broadcast/lecture ("The Church and Islam") is very worthwhile (esp for the contrast between Christian and Muslim). http://renewingyourmind.org/broadcasts/2016/04/08/the-church-and-islam
There is a very good overview article on the same page: "Inside Islam" by Abdul Saleeb (a Muslim who converted to RCism). Highly recommended, particularly in the contrast to the Holy Thursday foot washing disaster.