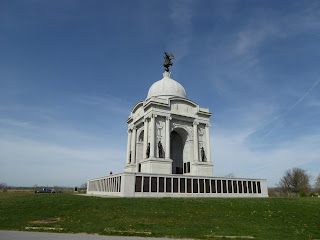 Larry and I spent the weekend in Gettysburg square dancing with our camping club. We never have much time on these weekends to see the sights so we stayed an extra day. This morning we biked the battlefield. As I rode around examining the monuments and reading the historical markers I thought of choice. The Kansas-Nebraska Act signed in 1854 was all about choice. Western territories had the "freedom to choose" by popular vote whether to be slave or free. In other words, Kansas-Nebraska, like Roe v. Wade was "pro-choice." Of course, Kansas Nebraska was passed by the Congress and Roe was imposed by the Supreme Court, but both sanctified the notion of the freedom to choose.

I think from now on when someone tells me she's "pro-choice" I'll say, "Ah...you must be pro-slavery then!"  When the speaker takes exception I will explain that "If you're pro-choice, you would have supported the Kansas-Nebraska Act that allowed territories the right to choose by popular vote whether to be slave or free. Because the freedom to choose is an absolutely essential right. Correct me if I'm wrong." 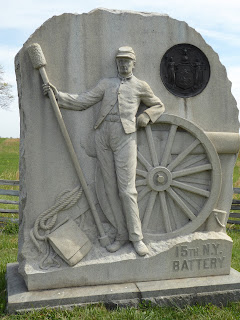 Can you just imagine the horrified look on a liberal's face when accused of supporting the politically incorrect choice of slavery? Liberals have absolutely no problem with the choice to kill black babies. What possible argument could they have against the choice to enslave black men, women, and children? If "choice" is a sacred sacrament, they must support the Kansas-Nebraska compromise. Hey, if you don't support slavery, don't buy a slave.

Somehow, I don't think that would fly among liberals. Keeping black slaves is horrible. Killing black babies is no problemo.

But then no one expects liberals to be consistent or logical. They make up the rules to match what they want to do today. And sex without complications requires access to child-killing. So stay away from Gettysurg, liberals. It is a monument to the results that come from supporting choice, i.e., civil war.

You make an excellent point - if I may expand on it a bit. In the 1960's & early 70's liberal (or progressive, or whatever they were called then) devised this great 'safety net' for impoverished, mostly inner-city populations, who happened to be overwhelmingly African-American. Medicaid, public housing, food stamps, abortion on demand, etc. But look how it worked out. Poverty continues, there are many families with no father to help raise the children (or often, several different fathers), rampant crime, drug abuse, high incarceration rates, and so forth. Now, I am going to make a statement that may sound blunt, and racist, but pls take it in the context I have set up; Here goes: If the most core-to-the bone segregationists of that era wanted to design a system to 'keep these people in their place', they could do no better than what liberal politicians indeed put in place.