Is This How the Schism Begins? In the name of love (Amoris Laetitia)? 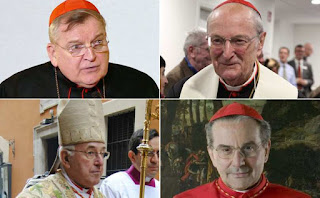 Well, the division in the Church is intensifying because of the disastrous document Amoris Laetitia (The Joy of Love). It has become increasingly clear that the pope intended the ambiguities in the document to allow sacrilegious Communions and that some liberal bishops are dumping Church doctrine in the name of the pope's faux "mercy." The progressives are showing exactly how unmerciful they are as they threaten the cardinals who had the courage to respectfully ask for clarification to alleviate the confusion that is upsetting so many Catholics. That these men are being vilified and attacked shows the bad faith of those clerics who want to make the Catholic Church one more Protestant sect not in the image and according to the dictates of our head, Jesus Christ, but in the image of people like Martin Luther, John Calvin, and other rebels. Pray for Holy Mother Church, study the doctrine, and discern the spirits. There are many wolves in cassocks. Recognize them for what they are, don't listen to their ear tickling, and keep the faith!

Oh, one last comment. Note the famous "Francis mercy" exhibited by the critics of the four cardinals who did nothing but ask for clarification of Amoris Laetitia. I think Topsy and Tuptim will be getting together for coffee soon to discuss all the latest developments on that dubious document.

From the termites undermining the faith:

The Fruits of Amoris Laetitia in San Diego - Bishop McElroy tells priests to give Communion to the invalidly remarried attacking the Catholic doctrine on the indissolubility of marriage.

Head of Greek bishops rips the four cardinals who questioned Amoris Laetitia  "Instead of addressing the specific concerns raised by the Cardinals in their letter to the pope, Bishop Papamanolis accused them of heresy for questioning the pope, even claiming that as a result of their intervention, their Masses are sacrilegious."

Meanwhile, the defenders of the faith, both clerical and laity come to the defense of the faith and of the cardinals who issued the Dubia.

Prof. Roberto de Mattei: "Resistance and Fidelity to the Church in times of crisis."

Dr. Jeff Mirus, Catholic Culture: When Questions are Perceived as Threats, a Guilty Conscience is at Work -- "How is it that we cannot understand the Word of God today?"

Bishop Athanasius Schneider: Statement Supporting the "Prophetic Voice" of the Four Cardinals -- ..."the Four Cardinals only did their basic duty as bishops and cardinals, which consists in actively contributing so that the revelation transmitted through the Apostles might be guarded sacredly and might be faithfully interpreted."

Canon Lawyer Ed Peters: Cardinals in the Church have rights too. "The rashest reaction to the “Four Cardinals’ Five Dubia” so far is that from Bp. Frangiskos Papamanolis, President of the Bishops’ Conference of Greece, whose railing against the questions posed by Cdls. Brandmüller, Burke, Caffarra, and Meisner in regard to Pope Francis’ Amoris laetitia must be read to be believed."

And here's the song for this post. My goodness what evils can be promoted "in the name of love?"

Fr. Pio Vito Pinto has been one of the Pope's 'attack dogs' of the four courageous Cardinals. He has threatened that the Pope could remove their red hats! Now we discover (read the newest post at One Peter Five) that Fr. Pinto MAY be a freemason. Why don't I find that a 'surprise'? There is no doubt that the Vatican is overflowing with freemasons that finally, after a hundred years or more, have their eye on the prize: to DESTROY the Church of Christ.

LOL.....I find it quite telling that the Pope is up in arms about the 'Dubia' which in reality is only asking for clarity. Why is asking for clarity such a slap in his face?......WHY will he not answer???!!! What it tells me is that the Pope is indeed trying to change doctrine and go against the words of Christ via the back door in his A.L. Encyclical, it's as plain as day. I'm afraid his mask is off!