Would General Patton's Manly Christmas Card Send the Snowflakes to Their Safe Spaces?

At Christmas time in 1944 the U.S. Army was struggling against, not only the evil Axis forces, but against the weather. Two months of continuous rain had bogged down Allied progress and now, in December continued to hinder troop movements.

With Christmas approaching, General Patton asked Chaplain Fr. James O'Neill to compose a prayer to be delivered to the 250,000 soldiers of the Third Army under his command inviting them to pray to God for an end to the rain and victory against the German Army. The chaplain included a personal message commending the courage of the soldiers and wishing them a Merry Christmas. Approval and signing of this Christmas message by General Patton took place on December 8th, the Feast of the Immaculate Conception.

The message was delivered in mid December about the time the Battle of the Bulge began with the Nazis soon encircling 15,000 troops in Belgium around the town of Bastogne with a massive German force of 50,000.  The rain, preventing air cover, kept Patton from coming to the rescue and the American troops were in danger of running out of ammunition and being overrun. But shortly after the prayer effort began (The Christmas letter was delivered to the troops around December 12, the feast of Our Lady of Guadalupe, shortly before it's December 14th letter date.), the rain stopped, the fog lifted, and the skies cleared.


Patton led his men to relieve the besieged troops and gain a victory over the Nazi army at Bastogne.

But there is more to the story as it was told later by Fr. O'Neill, because not only did Patton order the Christmas message to be sent to the troops, but he also instructed a training document on prayer to be written and delivered to all the chaplains and military commanders of the Third Army. Here's a portion of Fr. O'Neill's personal accounting of what transpired when he spoke to General Patton. He begins with Patton's question:


"Chaplain, how much praying is being done in the Third Army?" was his question. I parried: "Does the General mean by chaplains, or by the men?" "By everybody," he replied. To this I countered: "I am afraid to admit it, but I do not believe that much praying is going on. When there Is fighting, everyone prays, but now with this constant rain -- when things are quiet, dangerously quiet, men just sit and wait for things to happen. Prayer out here is difficult. Both chaplains and men are removed from a special building with a steeple. Prayer to most of them is a formal, ritualized affair, involving special posture and a liturgical setting. I do not believe that much praying is being done."
The General left the window, and again seated himself at his desk, leaned back in his swivel chair, toying with a long lead pencil between his index fingers. 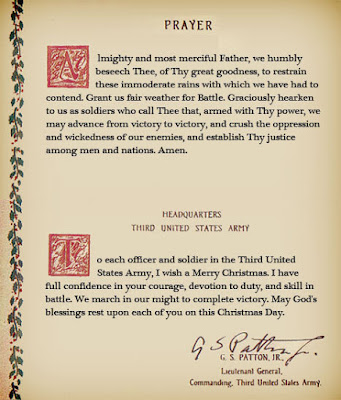 Chaplain, I am a strong believer in Prayer. There are three ways that men get what they want; by planning, by working, and by Praying. Any great military operation takes careful planning, or thinking. Then you must have well-trained troops to carry it out: that's working. But between the plan and the operation there is always an unknown. That unknown spells defeat or victory, success or failure. It is the reaction of the actors to the ordeal when it actually comes. Some people call that getting the breaks; I call it God. God has His part, or margin in everything, That's where prayer comes in. Up to now, in the Third Army, God has been very good to us. We have never retreated; we have suffered no defeats, no famine, no epidemics. This is because a lot of people back home are praying for us. We were lucky in Africa, in Sicily, and in Italy. Simply because people prayed. But we have to pray for ourselves, too. A good soldier is not made merely by making him think and work. There is something in every soldier that goes deeper than thinking or working--it's his "guts." It is something that he has built in there: it is a world of truth and power that is higher than himself. Great living is not all output of thought and work. A man has to have intake as well. I don't know what you it, but I call it Religion, Prayer, or God.

He talked about Gideon in the Bible, said that men should pray no matter where they were, in church or out of it, that if they did not pray, sooner or later they would "crack up." To all this I commented agreement, that one of the major training objectives of my office was to help soldiers recover and make their lives effective in this third realm, prayer. It would do no harm to re-impress this training on chaplains. We had about 486 chaplains in the Third Army at that time, representing 32 denominations. Once the Third Army had become operational, my mode of contact with the chaplains had been chiefly through Training Letters issued from time to time to the Chaplains in the four corps and the 22 to 26 divisions comprising the Third Army. Each treated of a variety of subjects of corrective or training value to a chaplain working with troops in the field. [Patton continued:]

I wish you would put out a Training Letter on this subject of Prayer to all the chaplains; write about nothing else, just the importance of prayer. Let me see it before you send it. We've got to get not only the chaplains but every man in the Third Army to pray. We must ask God to stop these rains. These rains are that margin that hold defeat or victory. If we all pray, it will be like what Dr. Carrel said [the allusion was to a press quote some days previously when Dr. Alexis Carrel, one of the foremost scientists, described prayer "as one of the most powerful forms of energy man can generate"], it will be like plugging in on a current whose source is in Heaven. I believe that prayer completes that circuit. It is power.

With that the General arose from his chair, a sign that the interview was ended. I returned to my field desk, typed Training Letter No. 5 while the "copy" was "hot," touching on some or all of the General's reverie on Prayer, and after staff processing, presented it to General Patton on the next day. The General read it and without change directed that it be circulated not only to the 486 chaplains, but to every organization commander down to and including the regimental level. Three thousand two hundred copies were distributed to every unit in the Third Army over my signature as Third Army Chaplain. Strictly speaking, it was the Army Commander's letter, not mine. Due to the fact that the order came directly from General Patton, distribution was completed on December 11 and 12 in advance of its date line, December 14, 1944. Titled "Training Letter No. 5," with the salutary "Chaplains of the Third Army," the letter continued: "At this stage of the operations I would call upon the chaplains and the men of the Third United States Army to focus their attention on the importance of prayer.

Today the ACLU would be demanding Patton's removal and the Southern Poverty Law Center would be labeling him a hate-monger. The snowflakes would be running to their safe spaces to color, hug their transgender teddy bears, and make play dough cookies.

Thank God for manly, God-fearing men like General George Patton. Perhaps watching the movie Patton with George C. Scott will become a new Christmas tradition for me and my family. May this man who knew where true authority lies rest in peace. He was a devout Episcopalian who fervently believed in the power of prayer. And clearly Our Lady was instrumental in his success.

Our Lady of Victory, intercede for all those who fight for the good.

St. Barbara, patron of the military, intercede for General Patton and all our military.

Our Lady, Queen of Peace, pray for us.

One final piece of Patton trivia. He played a significant role in the rescue of the Lipizzaner breeding mares allowing the famous school for the performing horses to survive.

Labels: Battle of the Bulge, Christians in the military, faith in God, General George Patton, Lipizzaner stallions, Patton's Christmas Card to the troops