I'm so sick of all the hand-wringing and crying by liberals over parents being separated from their children at the border. These are the same folks who don't mind separating babies from their moms by tearing them limb from limb and sucking them out of the womb even in the 9th month of pregnancy.

So much of this propaganda is just liars lying.

I watched a CNN video of Anderson Cooper criticizing Trump's executive order allowing families to stay together. In the video were the iconic pictures of the little girl crying while her mom is being searched by border agents. But her dad (who has a job in Honduras) recently stated that his wife, who paid a coyote and left Honduras without even a good-bye, was never separated from the child.


Time Magazine after putting the little girl on the cover with a photo of Donald Trump looking down at her and saying, "Welcome to America," had to publish a correction. But, hey, they've put that lying image into the minds of millions of people and are using the children to batter Trump. Matt Drudge posted images on his page showing how the Obama administration locked children in cages with foil blankets. He tweeted one of the photos. Did the Democrats care then? Not a chance!: 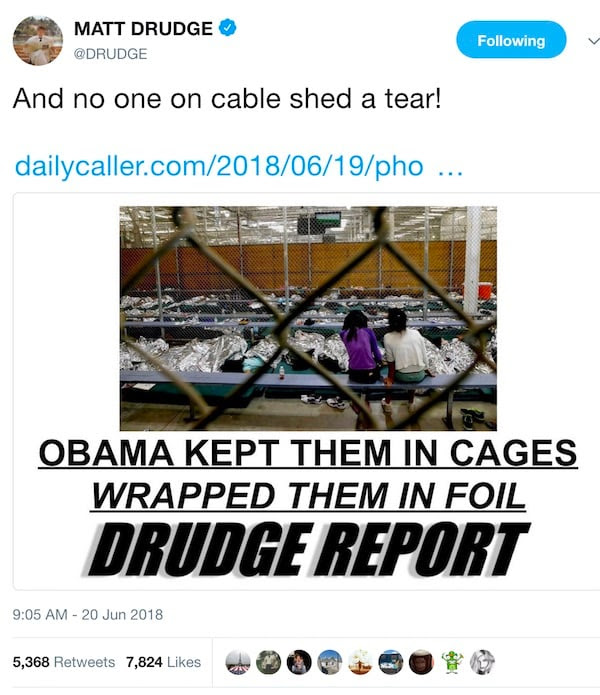 All of this is not about the welfare of children or families. It's about attacking president Trump. Democrats who are fine with killing babies who survive abortion (Remember when Obama voted against a bill in Illinois protecting abortion survivors.) want everyone to believe they really care about kids. I'll believe it when they protect babies in the womb. Meanwhile, try to find a CNN report about the Obama administration separating families at the border. You can't.

Ranchers living on the border face destruction of property, theft, violence, kidnapping, and even murder from the coyotes and drug cartels leading people over the border. They live in fear of the escalating violence. Many women are raped on the journey and there's even a "rape tree" in one area where women's underwear is hung to demonstrate the "manliness" of these monsters. When I worked at a crisis pregnancy center, I met one of their victims. She refused our help and left. Did she abort? I don't know, but she never returned.

As for the little girl, Yanela, her mom is the one who ripped her out of the arms of her father. Is there any sympathy for him?

And where is the concern of Democrats for Americans living in the border states dealing with the horrors of the invasion? Do they care about the family whose dad was murdered on his own ranch? The illegal invasion is all about love of money and smuggling to get it -- both drugs and people. If it isn't stopped, America will cease to be America. Trump is the little boy with his finger in the dike. Let's pray for him every day! As the rancher in the video below says, "This is the best it's been in thirty years."

Think Anderson Cooper will interview him on CNN?

Posted by Mary Ann Kreitzer at 9:47 AM