Nancy Pelosi, I Know Who You Are and I Saw What You Did


Nancy Pelosi’s recent divergence from decorum opened a window exposing who she is and what she’s really like when she steps out of her scripted public persona.  On the inside she’s a communist in conflict with her own self, who thinks she can profess something with her tongue that is contrary to the motives of her mind, formed and perfected after years of practice inside the Democrat Party, the party of lies. 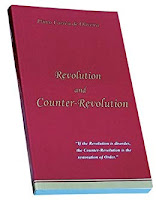 In his book, Revolution and Counter-Revolution, Plinio Correa de Oliveira, an anti-communist, points out the fact that while we have been witness to several so called revolutions in history there is actually only ONE Revolution  He says,


“Although the Revolution has often overthrown legitimate authorities and replaced them with rulers lacking any title or legitimacy, it would be a mistake to think this is all there is to the Revolution.  Its chief objective is not to the destruction of certain rights of persons or families.  It desires far more than that.  It wants to destroy a whole legitimate order of things and replace it with an illegitimate situation.  ………….It is a vision of the universe and a way of being of man that the Revolution seeks to abolish with the intention of replacing them with radically contrary counterparts.”


In this sense, one understands that this is not just a revolution; it is the Revolution.”


“Indeed, the order of things being destroyed is medieval Christendom.  …..not just any order, or merely one of many possible orders.  (Rather) ……the only authentic order among men, namely, Christian civilization. “

And what do the “revolutionary forces want to replace this order with?  Liberty, equality, sensual freedom.  In other words the liberty to embrace any religion of your choice or none at all, the false belief that all men are equal, whether they are lazy, or sodomites, or liars, or killers, or thieves, and the license to behave in any manner or form you prefer if it feels good.  Democrats embrace all of the above, even the ones who call themselves Catholics.

Oliveira said, “It behooves us not to fail to include among these forces of the Revolution those Catholics who profess the doctrine of the Church but are dominated by the revolutionary spirit.  A thousand times more dangerous than her declared enemies, they combat the Holy City from within her walls. “

Included in the book is this quote by Pius IX, who said,


“Though the children of this world be wiser than the children of light, their snares and their violence would undoubtedly have less success if a great number of those who call themselves Catholics did not extend a friendly hand to them.   Yes, unfortunately, there are those who seem to want to walk in agreement with our enemies and try to build an alliance between light and darkness, an accord between justice and iniquity, by means of those so-called liberal Catholic doctrines, which, based on the most pernicious principles, adulate the civil power when it invades things spiritual and urge souls to respect or at least tolerate the most iniquitous laws, as if it had not been written absolutely that no one can serve two masters.  They are certainly much more dangerous and more baneful that our declared enemies, not only because they second their efforts, ………….beguiling the imprudent friends of conciliations and deceiving honest persons, who would revolt against a declared error.”


In other words, by presenting themselves as Catholics and standing by policies and laws that offend God, they give others the impression that such is acceptable and ought to become the norm.  This would include gay marriage, abortion, divorce and remarriage, witchcraft, Sharia law, polygamy, and other offenses.  Nothing is a sin anymore to the revolutionary.

Nothing you do or fail to do personally that is.  For today’s revolutionary “liberty” has taken on a new banner, that of Liberation Theology, which cares only for what it calls “social sins.”

This is why when fancy pants Nancy returned to the microphone in a huff, spitting and sputtering, she was quick to show us her rainbow bracelet and mutter something about caring about the climate, and wagging her finger about the dreamers and the children.  These are the things in the new religion that count and nothing more.  This is why she no longer gives a damn about the unborn.  They are individuals.  What matters to her and all those in the revolution is the march toward the “new world order” where the Catholic Church, as we’ve known it, will be flushed out of our memories, banned from our schools and communities,  and an anything goes mentality takes its place.


For the common good, they tell us.  The common world they will invent without God where all men share the same thoughts and people like you and me and Donald Trump, who is telling the world the exact opposite, are destroyed by any means necessary.

She can’t hate Donald Trump!  Don't you see?  She isn't allowed to.  In the Revolution, hate simply isn’t in the vocabulary.  No hate speech, no hatred of differences, and no hatred of ideas, no objections to anyone or anything.  Nancy knows this, but she and the liberals like her “have more work to do” you might say, perfecting themselves for the implementation of what they know is going to be utopia once and for all.  If they could just shut us up!

Pic of Pius X, not IX