Of course she hates Trump! And everybody knows it!

All the abortion-loving Democrats hate Trump. Planned Parenthood hates Trump most of all, and, let's face it, most Democrats are in their blood-soaked pockets. But note how Pelosi flared up and immediately went to the podium and used children to launch a further attack on Trump. This is a typical Democrat strategy. Remember Waco? They killed the children because they cared about the children.

Good grief! This is a woman who champions child sacrifice up to birth and after and celebrates sodomy (which often targets healthy young adolescent boys -- "chickens" in homo-speak -- who are disease free).

But Nancy is a Catholic, she tells us -- and she just luuuuuuuuuuvs everyone -- especially the president. She prays for him every day because she's not just a plain, old ordinary sinner in the pews, but a "DEVOUT" Catholic. I mean she was wearing white for the press conference -- like the angels.

So here's a question for Nancy. Exactly what does it take to be "devout?"

Let's look at the etymology of the word she bandies about so freely, along with fellow Catholics Joe Biden, Mario Cuomo, Tim Kaine, et al. Pete Buttigieg, who also stuffs his sanctimonious moral drivel down people's throats every chance he gets, was baptized Catholic but now he goes to the Episcopal Church with his same-sex "husband" -- or is it his "wife"? --- They get soooo much out of it he tells folks. At any rate, they all play the game of piety. (See how holy we are? Oh!...Oh! And see how much we care about the children!)

But back to the word "devout." It comes from the Latin devovere, de-"formally" and vovere "to vow" which implies a serious commitment, a formal vow in fact. According to the Oxford Dictionary devout means, when speaking of a person, -- "believing strongly in a particular religion and obeying its laws and practices."

"BELIEVING STRONGLY IN [THE CATHOLIC FAITH] AND OBEYING ITS LAWS AND PRACTICES!"

How do these pro-abort, pro-contraception, pro-euthanasia, pro-sodomy Democrats measure up on the Catholic faith scale -- as in "believing in...and obeying its laws and practices? A big, fat zero!

Nope! Not devout! Not an ounce Catholic in mind and heart! Blaspheming against God by claiming he approves the murder of His creation and approves of lust, even perverted lust, as well as slandering and defaming anyone who disagrees with them.

I can't even  call Nancy et al pagans because that would be to insult ethical pagans like Aristotle and Socrates. They most resemble the Aztecs who practiced human sacrifice on a massive scale (but not nearly as massive as our abortion culture). She and her friends also verbally rip the hearts out of their enemies with their lies. Remember where the verb "bork" came from?

She and her buddies are devout indeed, but not devout Catholics. They are devout Democrats. Their party is their god, abortion and sodomy are their sacraments, and maintaining their seats of power is their heaven. They trade their birthright for a bowl of potage, especially those who claim to be Catholic. For what does it profit a (wo)man to gain the whole world (or at least Speaker of the House) and lose her soul?

We need to pray for folks like Nancy and other politicians of her ilk, because not only are they guilty of sins that cry to heaven for vengeance, but their scandals call for necklaces made of mill stones. 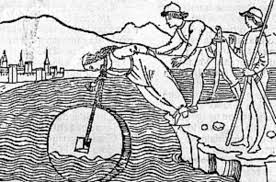 We'd rather see you convert, Nancy. You don't have that much time left! I'm asking Bernard Nathanson, former abortionist who became an apostle for life, to intercede for you. And I'm giving you a Christmas gift -- a Mass. One drop of Jesus' blood is sufficient to save the whole world. May it bring you to a realization of the grave danger you  face!
Posted by Mary Ann Kreitzer at 5:00 AM

What a fraud is our nance. She is as devout as walnut. This not the first time I have heard her describe herself as devout. She is a devout idiot.

I would add,
Nancy, thou doth protest too much.

Obviously she hates Donald Trump. Why else would the question have sparked such undeniable rage?