Bransfield Banned from Burial in Diocese of West Virginia

I support everything Bishop Brennan is doing to call Bransfield to repentance. The man has been a sniveling crybaby since his actions became public claiming everyone is out to get him and he's being picked on, etc. ad nauseum. Why is he still a bishop? Actually, he could presumably have attended the bishops' Fall meeting although Bishop Brennan told him to stay away. And I expect he would have been shunned like a bag of rotten potatoes. But shouldn't he be defrocked like McCarrick?

It's somewhat puzzling that the attention to his misdeeds of harassing adults and embezzling money has garnered buckets more attention (it seems to me) than McCarrick's abuse of minors and years of lying and manipulation. Don't you think McCarrick was spending his parishioners' money to buy influence and enjoy the good life? Where is the financial investigation of him?

And what about the current situation. There's McCarrick living with the monks in Kansas (next to an elementary school) where he says, they "treat me like a brother" while he continues to deny being a molester. The powers that be wanted to get him out of the Emerald City and into a nice safe haven, so they spirited him out of Oz quietly and settled him in Kansas.

I think McCarrick is a pathological liar who may be suffering from a dementia that allows him to believe his own lies. Of course, he says, he couldn't possibly have done all those things he's accused of. He was a priest for 60 years. Abuse someone in Confession? Perish the thought!

One can only pray that he faces himself squarely before the day of judgment and sincerely repents. 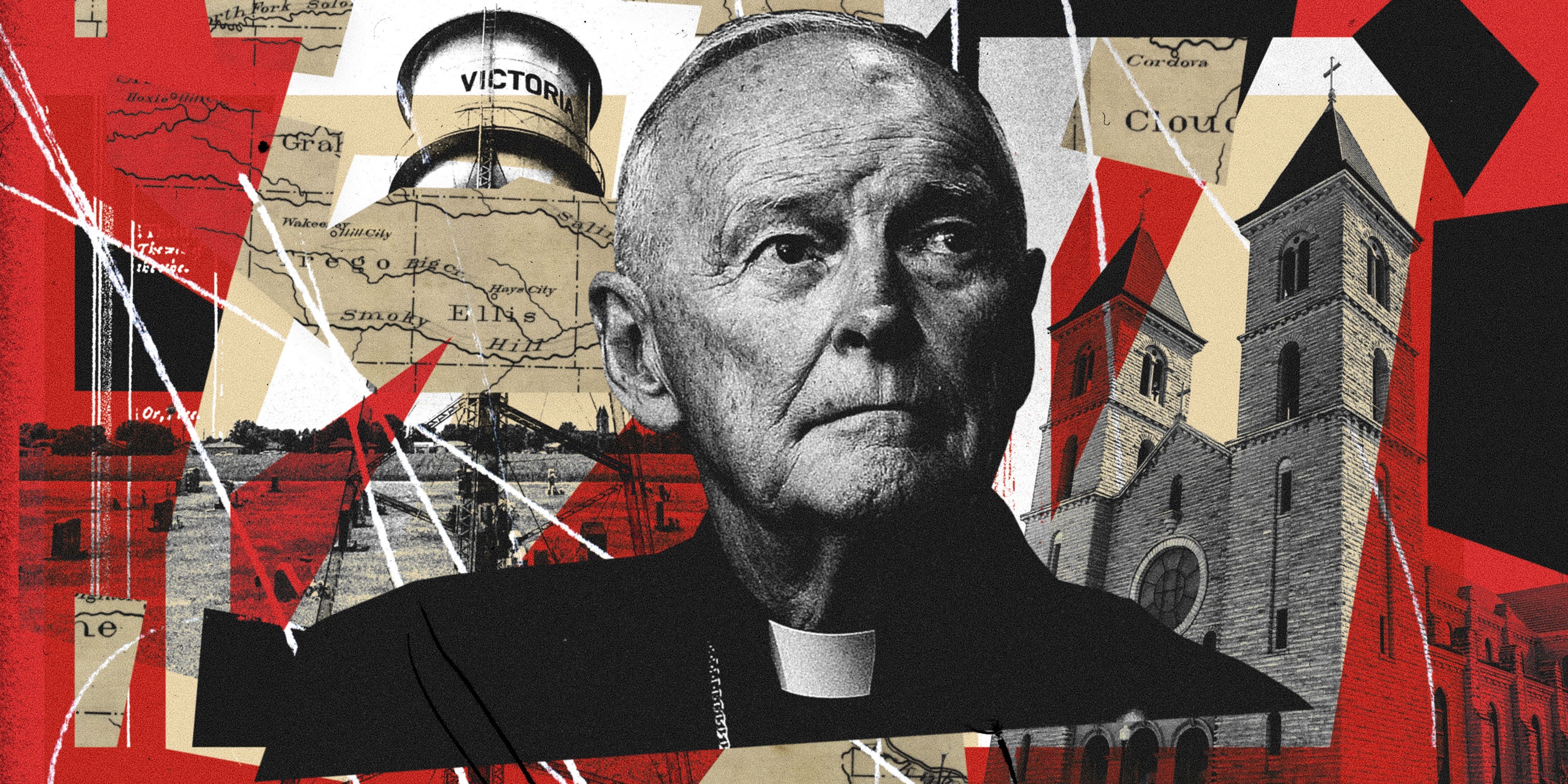 Having said all that, I'm still puzzled by the relative comfort of McCarrick's end game and the on-going demonization of Bransfield who appears to be on his own and abandoned. Is Bransfield the scapegoat being used to hide the fact that his story is not uncommon among bishops? Is beating up on him a distraction from all his philosophical twins? Is he the pea in the shell game? Are your eyes spinning?

How many other gay bishops amuse themselves with underlings while they spend the flock's money on their lavish lifestyles? Or are they engaging in consensual sodomy with "age-appropriate" partners?

Bransfield hasn't been defrocked -- yet, but perhaps that will be next. That would surely be appropriate and might bring some healing to the flock in Wheeling including my husband's siblings and extended family. Will he end up in a monastery? Maybe he'd rather be on his own.

Pray for Bransfield and McCarrick in charity even if you have to hold your nose like I do.

I think we may find out just how many bishops are involved in abuse and cover-up as time goes on. Archbishop Scicluna warned Catholics to be prepared for more horror stories.

Pope’s point man on abuse to U.S. Church: Be prepared for new revelations

And yet it seems like McCarrick's buddies are all blissfully enjoying the respect of Francis including "Nighty-night, Baby" Joseph Tobin and "I knew nuthink!" Kevin Farrell who proceeded to get the job of camerlengo, the office that handles the property and revenue for the Holy See. Wow! Doesn't that just fill you with confidence? Yes, Archbishop Scicluna, we'll be waiting for the next shoe to drop. (I was tempted to write the next "pants" to drop since some of these men have trouble with their zippers.)

But no matter the horrible revelations, please don't let it shake your faith. These Judases in the hierarchy are not the Church! And I hate to say it, but in a culture of lust, divorce, abortion, contraception....they may be exactly what we deserve. How many of the flock are Catholic in name only picking and choosing in the church cafeteria. We need to examine our own consciences and see how much evil in the hierarchy is a reflection of our own. Above all, pray for humility. Only little, humble people get into heaven as Fr. John Hardon, S.J. (RIP) often said.

Pray and do penance this Advent season, especially for those tottering over the abyss. Catholics do not put their trust in men -- even popes and others in pointy hats and red beanies. But they also don't want their destruction. Imagine the blessing if Pope Francis acted like all the martyr popes of the first three centuries!
Posted by Mary Ann Kreitzer at 5:00 AM

Is pope Francis doing an end run around papal infallibility????? His and the bishops plan
to recognize "ecological sins" and put them in the Catholic Catechism.If he is going to
declare a doctrine or teaching of the Church,let him and the Bishops state it explicitly
that it is an official teaching or doctrine of the Roman Catholic Church.They should not be schrewing around with the Catechism of the Catholic Church with their personal opinions or
presumptions.Their declarations on subjects like anthropological climate change is only as good as their arguments and sources that buttress their arguments,just as any other world
leader,no more or no less.When clergy talk like hack politicians, I treat their talk as
hack political talk.