Another Round of Great Articles: From Fr. Jerry Pokorosky and Raymond De Souza 
The sex abuse crisis within the Church, along with an increasingly top-heavy bureaucracy, has – arguably – caused a kind of institutional paralysis....How else can we explain the general institutional failure to guard religious liberty during the pandemic? Historians will forever argue whether respect for the common good, fear of legal action, or servile fear, motivated Church authorities to meekly comply with government edicts. Regardless, the Church’s bureaucratic behemoth – and virtually every Catholic parish and entity – have submitted.


Many of us consider the Church cave-in disastrous with serious future consequences for religious liberty and freedom of assembly. And was it necessary? A church for a thousand worshipers can easily allow several hundred with distancing protocols. Locking Our Lady's immense shrine in D.C. is one of the most shameful episodes in the litany of shame across the country.

While our bishops implement policies giving homage to Caesar, "Many Protestant ministers are leading the fight to restore religious liberty." Thank God for them! For years Catholics and Protestants have been allies outside (and inside) the abortuaries. I met many wonderful brothers and sisters from other faiths sidewalk counseling, standing side by side at Life Chain and 40 Days for Life, working at pregnancy help centers, and sharing prison cells after rescues. I'm confident that the Lord will use our love for the little ones and for religious freedom to bring us closer to reunion.

I love the recent quote from Judge Walker in Kentucky. “The Court does not mean to impugn the perfectly legal business of selling alcohol, nor the legal and widely enjoyed activity of drinking it. But if beer is ‘essential,’ so is Easter.”

Amen! Alleluia! It's long past time to restore the Mass!

And I offer a second article from Raymond De Souza at The Wanderer. (N.B. You won't be able to read the full article unless you subscribe to the digital edition or pay a fee. I heartily recommend the paper and subscribe to the print edition myself.)

What is the Root of the Problem 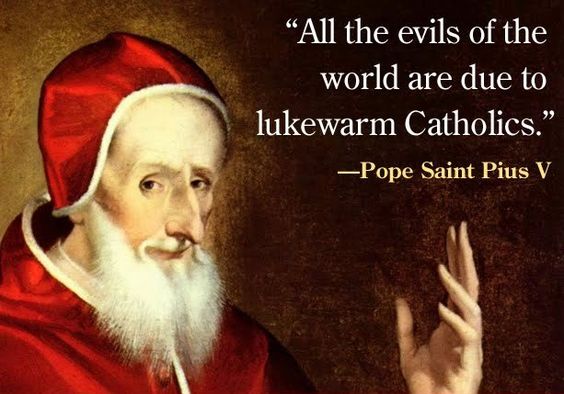 De Souza addresses the Church's "most serious crisis of faith in history." And it isn't COVID 19! Nor is it "to be found primarily in the effects of the secular policies by this or that administration, promoters of abortion and unnatural sexual practices, [etc.]." He summarizes it in one word, the mediocrity of professed believers who "take no risks" and prefer to be "like the chicken, that flies a little  and comes down again to the dust, safe and sound."

How does he define mediocrity? It is the "refusal to see the big picture, the cause of the Catholic Church, the militant aspect of being a Catholic." Mediocrity embraces "minimalist ethics." Don't kill, don't steal (at least not too much). But don't put yourself out "fighting evil" or worrying about "loss of souls." The mediocre with their minimalist ethics have "No desire to see good rewarded and evil punished, because this might upset some people in the parish. And after all, who are we to judge those who live in adultery or support abortion, contraception, and euthanasia?"

I think De Souza pegs it when he laments "shallow religiosity" preoccupied with the "type of prayer that makes one feel good....At best, the mediocre neither desires Heaven nor hates Hell -- he'd be quite contented with spending eternity in Limbo."

De Souza's article reminded me of Pope St. Pius V's statement. "All the evils of the world are due to lukewarm Catholics." Pope St. Pius X said something similar. “All the strength of Satan’s reign is due to the easygoing weakness of Catholics.” It was the condition St. Jean Vianney found when he arrived at his country parish of Ars. By his holiness, fidelity, and suffering he took a mediocre parish and transformed it into a powerhouse of piety. Let us fast and pray for all our priests and bishops that they may imitate the great patron of parish priests and follow his example. With their holy leadership may we see our Church revived and transformed into one that rivals the first century when so many were willing to DIE for love of Jesus.

St. Jean Vianney, pray for us.

Take a look at this:

St. Vincent de Paul Regional Seminary shares in the mission of Jesus Christ “to bring the good news to the poor” (Luke 4:18) in the training of future leaders.

The seminary’s primary mission is to foster the human, spiritual, intellectual, and pastoral formation of candidates for the Roman Catholic priesthood so that as ordained ministers they share the joy of the Gospel with all.

Acknowledging the cultural makeup of Catholics in the United States, the seminary distinguishes itself in offering a comprehensive bilingual formation program, preparing future priests for ministry in both English and Spanish while cultivating a rich and diverse multicultural community.

The secondary mission of St. Vincent de Paul Regional Seminary is to provide graduate theological education for permanent deacon candidates, clergy, religious, and laity as well as to offer ongoing clergy formation programs so that the evangelizing mission of the Church may continue and broaden its reach.

SVDP, producing protestantised preachers since...well, for quite a while now..

An Instrument Used by God for the Salvation of Souls


Catholic priests serve primarily as mediators between God and man.

The two offices—the offices of saying Mass and forgiving sins—are the most exalted among the many powers and privileges God grants His priests. The faithful, therefore, for these and many other reasons, owe the greatest respect and devotion to God’s chosen ministers.

Offering the Mass, and thus renewing Christ’s sacrifice on the Cross, constitutes the priest’s chief dignity. While engaged in the sacred liturgy, the priest assumes the role of the Son of God, lovingly offering himself to the Father on behalf of all mankind. When the priest says the words of consecration, he reenacts Christ’s sacrifice on Calvary, himself separating the Lord’s precious blood from His holy body. The priest then literally takes hold of God and raises Him up high so that the people can adore their Savior.

The priest, in addition to being the specific instrument God uses to manifest Himself daily to the Church, also distributes divine grace when he gives Communion to the faithful. The people thus receive God directly from the hands of the priest.

The priest’s dignity, however, is not limited to the Mass alone; he also shares another divine prerogative when he pardons sin through the sacrament of Penance. Christ, when He told His apostles that whose sins they forgive are forgiven and whose sins they retain are retained, clearly willed that the normal means of returning to God’s good grace should be through priestly absolution. Thus, the ordinary way a soul passes from the death of sin to the life of grace is through the Catholic priesthood. Only souls in the state of grace can enter paradise; therefore, God has entrusted the very keys of Heaven to his priests.
++++++++++++++=

At Saint Thomas Aquinas Seminary there remains a real continuity of faith and praxis while the continuity slogan for the seminary in So, Flo, could be Everything is different, nothing has changed

Does ABS use Lesfemmes blog as a platform for his deceased blog? Just make a comment, ABS, not an entire blog post!...Or open up your own blog again, for crying out loud!

Dear Susan. ABS does have an active blog but he thinks linking to it on the blog of another is not kosher.

ABS thought seeing what an NO seminary does and having that opposed to what a Traditional seminary does have value when it comes to whether or not the SSPX or the N.O NuChurch deserves support.

Dear Susan. If'n' you and others want ABS to stop commenting here, just say so.

ABS, I have no problem with long comments, and I'm the blog administrator. I moderate all the comments. However, I think a comment is less likely to be read if it's long which is a shame if you have a good point to make. In this particular instance. I think it would have been more useful to give the first line from the seminaries websites and then link to their mission statements suggesting readers compare the two. Then those who are interested can do so.

I appreciate all our readers (except trolls) and gladly post comments that are thoughtful and add to the discussion.