The Laugh of the Day: Of Silly Trolls and Tattletales!

Several trolls like to visit my blog and fly around like moths to a flame. They hate what I do and say, but can't stay away. Frankly, I find that puzzling. If you don't like someone's opinions and their posts, why do you waste your time reading them? Do you just like to fight? Really...get a life!

One of the trolls is a Catholic with her own blog which I rarely read. I tried to engage with her for awhile, but realized it was pointless, and have only read, I think, one post on her blog in over a year. That one defended the Pachamama stunt at the Vatican. What a head-shaker!

I put up with trolls for awhile, but since their comments are usually ad hominem attacks adding nothing useful to the subject at hand, I've banished a few. "Sayanora, baby, no more comments from you. If you learn to be civil, I may reconsider."

One gentleman from Ireland appears to be mentally ill. I pray for him every time he sends a comment about us not being Catholic. He believes that because...well...I'm not exactly sure why he believes that...there's no understanding an irrational mind. He just keeps calling us faithless women and other less flattering pejoratives. So I pray for him and ask St. Patrick to bless him and bring him back to his senses and then drop his comments in the on-line trash bin.

One person, I think a woman, although she hides behind anonymity is giving me lots of laughs lately. The other day she wrote, "Ok. This blog is officially designated as CRAZY!!!" (I didn't post her silly comment which, again, was nothing but an ad hominem attack.)

And she is certainly entitled to her opinion. I've been called many names over the years: "crazy...a fat cow...an enemy of the Holy Spirit...homophobic...racist"...and on and on. Jesus said they'd treat His followers the same way they treated the Master, and He certainly suffered name-calling, "crazy, blasphemer, demon-possessed" -- so no surprise! Anyone trying to defend the faith will be attacked.

This troll appears to be friends with the blogger troll. They are two peas in a pod so she can easily take her ad hominem attacks to that blogger who will happily post them. It won't bother me because I'll never see them since I don't read it. As I said, Life is too short.

Sometimes you just gotta laugh, though. This woman (no man would act that way unless he was a girly guy) obviously assigned herself to the blog police department to go around and OFFICIALLY blow the whistle on people like me. She promised to report me to the Apostolic Nuncio and to my bishop and says she has sent a REGISTERED LETTER to the nuncio.

Omigosh, my teeth are chattering! 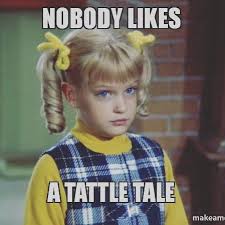 I hate to tell the silly tattletale, but the nuncio couldn't care less. He has bigger fish to fry than my blog. She will probably never even get a reply.

As for the bishop, the last four (Bishop Thomas Welsh, Bishop John Keating, Bishop Paul Loverde, and the current bishop, Michael Burbidge) were and are all well aware of what I do. I've been publishing a newsletter in the diocese for twenty-five years that goes to the bishop, the chancery staff, and every pastor and parochial vicar in Arlington (with a few exceptions) as well as many of the DREs and school principals. I'm not exactly hiding behind a rock marked "anonymous" or "unknown."

I love my faith and will defend it, I hope to the death if necessary. As a rescuer I went to jail several times for protecting little babies in danger of murder at the abortuaries. I think I can suffer a few tattletales and trolls. I bear them no ill will. In fact I've begun praying a Hail Mary for every person who leaves a comment on the blog whether it's nasty or nice. (But watch out for coal in your Christmas stocking!) The Irishman has a long string of prayers.

I'll close with a quote my big brother Ray loved. What a sense of humor he had and how much I miss him since his death a year ago. He would have laughed with me over the trolls, especially the tattletale's threat. He never ran from an argument on his Facebook wall with people who could hardly put a sentence together much less a cogent argument. He loved the scripture quote below so much he put the citation on his gravestone.

"The perverse are hard to be corrected, and the number of fools is infinite." Douay-Rheims translation of Ecclesiastes 1:15

Ray, please pray for me and for all the trolls who visit my blog. May we one day meet merrily in heaven!
Posted by Mary Ann Kreitzer at 4:06 PM

I received this via email:

Mary Ann,
I read your post about the tattletales and trolls.
I loved the quote your brother liked: "The perverse are hard to be corrected, and the number of fools is infinite." Douay-Rheims translation of Ecclesiastes 1:15

And there's this one: Stupidity is also a gift from God, but one mustn't misuse it. - John Paul II

May God have mercy on them! This is all I can say.... Your awesome apostolate gives great glory to God and I don't know what we'd do without receiving daily wisdom, courage, faith and trust from you. May Heaven shower you with all the blessings that will keep you defending our faith and our CHURCH bleeding and falling apart at this time. Forever grateful.