My friend Sandy sent the following information about Barbara Comstock who's entering the race for Congress to win Frank Wolf's seat. Read the data below and realize that Comstock is neither unequivocally pro-life, nor does she support traditional marriage. Her nomination as the Republican candidate would ensure many true conservatives will stay home. What's the benefit of electing Democrat-lite? I certainly could never pull the lever for her. She's wrong on the two biggest issues of our time, abortion and traditional marriage. The time to fight is now. I urge contributions and notes of support to Bob Marshall. We need a real social conservative in the race, not a woman who supported making the pill an over the counter drug, wants to require health exchanges to offer abortion, and supports the lunacy that two men or two women can contract a marriage.

Visit Bob Marshall's website and commit to helping him beat this faux conservative! 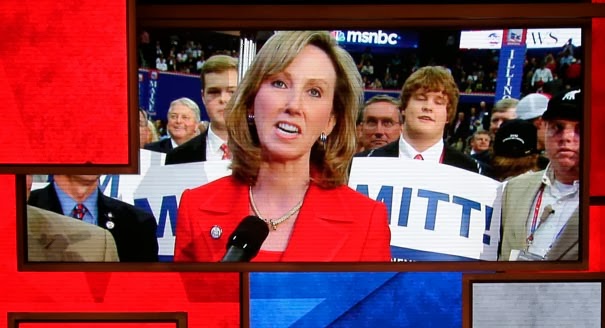 I have good and bad news. The bad new is Barbara Comstock had jumped into the race for retiring Frank Wolf's 10 District seat (House of Reps). She is a nominal Catholic, I am told, and has the support of substantial pro-gay big wigs. She raked in at least $99.000 for her run from those sources (see below).

The GOOD NEWS is that Bob Marshall would like to challenge her. But he needs our help to make phone calls, etc. If he knows he has enough foot soldiers for the fight, he will announce.

I think you know Bob Marshall well enough. He is truly worthy of our support.

Below is background on Comstock.I don't think she will be bragging about her gay support as she campaigns. We will have to do that for her. That's why phoning registered 10th District Republicans is so important. Bob Marshall's campaign will provide the names, phone numbers and script to follow. Bob could surely use financial support, but your time in calling potential voters is also very important.

If any of you savvy political guys are interested in helping organize this effort, please let me know.

Here's the info I received:

who is a billionaire hedge fund operator who started a PAC to steer the Republican Party in favor of homosexual marriage (his son "married" a man.) http://en.wikipedia.org/wiki/Paul_Singer_(businessman) See excerpt:

Singer has contributed to gay-rights causes and same-sex marriage campaigns, and has also actively sought to persuade other conservatives to support gay marriage. He has joined other Wall Street executives in support of LGBT equality in the workplace as a means of retaining employees and improving overall business outcomes.[32] He has said that same-sex marriage promotes “family stability” and said that in a time when “the institution of marriage in America has utterly collapsed,” the fact that gay couples want to marry “is kind of a lovely thing and a cool thing and a wonderful thing.”[33]

In 2012, Singer provided $1 million to start a PAC named American Unity PAC. According to the New York Times, the PAC's "sole mission will be to encourage Republican candidates to support same-sex marriage, in part by helping them to feel financially shielded from any blowback from well-funded groups that oppose it."[34]

Barbara Comstock refused to cosign Bob's letter to Governor McAuliffe to urge him to appoint legal counsel to defend Virginia's marriage amendment since AG Herring has refused to do so.

Barbara Comstock voted for and pushed for Tracy Thorne-Begland to become a judge. This man announced his homosexuality on TV's Nightline, even though he was in the Military at the time of the ban on open homosexuality. He was active with the Human Rights Campaign which is a radical pro-homosexual organization. (Political activists do not have the temperament to be a judge.) The Republican leadership also pushed for Thorne-Begland’s nomination and confirmation and he now serves as District Court Judge in Richmond.

Barbara Comstock voted against allowing Obamacare exchanges to opt out of covering abortion. The Family Foundation noted these anti-family votes (Judgeship and Abortion Insurance Opt Out) on page 8 of their 2012-2013 Scorecard.

Barbara Comstock voted against, and tried to convince Governor McDonnell to veto Bob's bill which became law which said that Virginia would not cooperate in the indefinite detention of American citizens under the 2012 National Defense Authorization Act, without due process.

On her Delegate website Barbara Comstock has under the heading of health care, words to the effect that Medicaid needs to be reformed before it can be expanded. Bob would be against expansion whether or not reforms go through. (("Reforms" whatever they turn out to be cannot possibly rid the Medicaid program of waste, fraud and abuse which runs so deep even the General Accountability Office said they cannot get a handle on the extent of it.) http://www.comstockfordelegate.com/issues/default.aspx

On Medicaid Reform: Delegate Comstock supports Medicaid reform before trying to expand what is currently an inefficient and broken system that does not serve those intended as well as it should. Medicaid is the fastest-growing line item in the budget - growing from $3 billion in 2002 to more than $7 billion in 2012 – a 133% increase and 22% of the state budget, threatening to crowd out other key services such as economic development, education and transportation. Delegate Comstock supports Medicaid reform through
the implementation of better-coordinated services and managed-care options, the adoption of cost-sharing, the promotion of health and wellness, and by cracking down on fraud. Delegate Comstock has continued working with her colleagues in the General Assembly to find workable reforms so that Medicaid can be expanded without unduly encroaching on other important areas of the budget such as education and transportation. Finally, Delegate Comstock believes a healthy economy with good jobs is the best way to provide people with health care through their employers as well as with tax incentives for individuals and small businesses to make health care more affordable. - See more at: http://www.comstockfordelegate.com/issues/default.aspx#sthash.pvdNxOU8.dpuf

Barbara Comstock wrote to Secretary Seblius in favor of making the birth control pill available over the counter without a prescription.

I am told she was once or is currently a lobbyist for Hollywood, but I don't know who her clients were or are currently.
Posted by Mary Ann Kreitzer at 4:47 PM

Her positions on the social issues are absolutely no surprise. All you have to know is that she graduated from the ultra liberal Middlebury College in Vermont and her first job was working for Senator Ted Kennedy. She claims to be Catholic and was always nosing around the Fall Festival at St. John the Beloved Church in McLean looking for votes.

I support you in your efforts to nominate a true social conservative, but surely you are aware that should Comstock win the nomination, a conservative rebellion against Comstock in the general election could ensure the election of a Democrat who certainly is worse on moral issues. Wouldn't being complicit in the election of a liberal proabortion, pro-gay marriage, religious freedom-encroaching Democrat be morally problematic? Also consider that if nothing else, Comstock will be a voting member of the Republican caucus in the House. Wouldn't you rather John Boehner control the House than Nancy Pelosi?

There will be a firehouse primary on April 26th. Bob needs to know if you will help get the vote out. If he has enough support he will announce his candidacy, but he needs to have a reasonable possibility of winning and he needs support for that. If you will help please call Bob on his cell phone 571-409-0588. He needs people to call in each precinct in the 10th District. You don't need to be in the 10th District to work for Bob.

I appreciate what you are saying, Anonymous, but it's the same argument I've been hearing for a decade. You have to support Bush. (Thanks, G.W. for undermining our freedoms with the Patriot Act and further expanding big government.) You have to support Romney. Well, that worked didn't it? As for John Boehner...well, he's another establishment Republican who is taking us in the wrong direction. So what do I prefer? Slow death with the establishment Republicans or quick death with the Democrats? If you're on a bus going the wrong way, you'll never get to your destination regardless of who's at the wheel.

And here's another assessment:

"If you're on a bus going the wrong way, you'll never get to your destination regardless of who's at the wheel."

Great quote. I'm going to borrow that one.

Nothing's original under the sun. I think I got that from somebody working for Howard Phillips when he ran for president on the Constitution Party ticket. Great man. Anyway, pass it on. I love the image too and it's soooo on target!