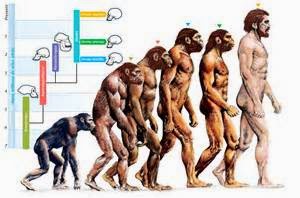 I was thinking about the theories of Darwinian Evolution and Intelligent Design last night and this morning I found this interesting article. Our current pope certainly believes in Evolution and the Church accepts the possibility of a God-centered interpretation of the origin of the world based on evolutionary change. It is not, however, the godless world of Darwin's evolution.

Here's what Pope Francis said last October when he addressed the Pontifical Academy of Science:

When we read in Genesis the account of Creation, we risk imagining that God was a magician, with such a magic wand as to be able to do everything. However, it was not like that. He created beings and left them to develop according to the internal laws that He gave each one, so that they would develop, and reach their fullness. He gave autonomy to the beings of the universe at the same time that He assured them of his continual presence, giving being to every reality. And thus creation went forward for centuries and centuries, millennia and millennia until it became what we know today.... The beginning of the world was not the work of chaos, which owes its origin to another, but it derives directly from a Supreme Principle who creates out of love. The Big-Bang, that is placed today at the origin of the world, does not contradict the divine intervention but exacts it. The evolution in nature is not opposed to the notion of Creation, because evolution presupposes the creation of beings that evolve.

In regard to man, instead, there is a change and a novelty. When, on the sixth day of the Genesis account, we come to the creation of man, God gives the human being another autonomy, a different autonomy from that of nature, which is freedom. And He tells man to give a name to all things and to go forward in the course of history. He renders him responsible for creation, also so that he will dominate Creation, so that he will develop it and so forth until the end of time. Therefore, the attitude that corresponds to the scientist, especially to the Christian scientist is to question himself about the future of humanity and of the earth and, as a free and responsible being, to contribute to prepare it, to preserve it, and to eliminate the risks of the environment, be they natural or human. However, at the same time, the scientist must be moved by trust that hidden nature, in its evolving mechanisms, of potentialities that concern the intelligence and freedom, to discover and to act to arrive at development, which is in the plan of the Creator. Then, although limited, man’s action participates in the power of God and is able to build a world adapted to his twofold corporeal and spiritual life; to build a human world for all – for all human beings, and not for a group or a privileged class. This hope and trust in God, Author of nature, and in the capacity of the human spirit, are able to give the researcher new energy and profound serenity. However, it is also true that man’s action, when his liberty becomes autonomy, -- which is not liberty but autonomy -- destroys creation and man takes the place of the Creator. And this is the grave sin against God the Creator.

Well, I'm no scientist and I certainly believe God can create the world however He wants. But I'm a mom and a lover of babies. And I hope I know God just a little bit because I'm His daughter who loves Him and is thankful for every breath I take. I owe EVERYTHING to Him except my sins. So here's the problem I have with the Big Bang and the theory of man evolving from a single-celled organism that climbed out of the slime and changed over millennia etc., etc., etc....

It just doesn't make logical sense to me from a philosophical point of view.

How did God enter human history to save mankind from our hopeless state lost in sin? Didn't he act like that magician with a magic wand that Pope Francis dismisses? Good grief, He sent an angel to a virgin and she conceived a baby by the power of the Holy Spirit? The Creator of the universe became a single-celled infant in the womb of His Mother and changed and grew until birth and beyond. Now THAT kind of evolution I can accept.

Is it harder to wrap one's mind around that miraculous conception of our Savior than the Genesis story of Adam and Eve?

I don't think so.

What I can't wrap my mind around is a personal God, who loved us enough to send His only  begotten Son to die for us, giving us soulless creatures of the slime as our original parents. Oh...I know...I know...at some point He ensouled the evolved creature. But that means our original grandparents who raised Adam and Eve were soulless. I just can't as a mother and grandmother who knows a little about love for my family wrap my head around that. It conflicts with the image I have of a personal God who loves me so much He has every hair on my head counted. But He didn't love our initial parents enough to give them intelligent and loving parents?

I know it's not a scientific argument, but it is one that speaks to my heart. It makes sense to me that God created Adam and Eve as adults with the infused knowledge and perfect integrity that made them beautiful images of Himself. I suppose one can say that creating Adam out of dirt is not much different than evolution's creatures of slime, our ancestral great-great-great, etc.....grandparents. But it sure seems different to me! And I prefer the magician with the magic wand who sent an angel to Mary with a humanly impossible proposal to a First Mover who set it all in motion and infused an ancient ape with a soul.

Not to mention the difficulty that, if sin brought death into the world, what was responsible for all the death and corruption that preceded original sin?

Like I said, I'm not a scientist, just a mom and grandmom looking for the truth. But some explanations just don't make sense to me. And, let's face it, evolution and the Big Bang are theories. We may never know the truth of the "origin of the species" for sure until we meet the Creator Himself. In the meantime, I'll go with my instinct which is a deeply personal God who would never let his beloved children be raised by soulless apes any more than He would our Brother Jesus.