Prologue and Chapter One: Paragraphs 1-30

The study group is meeting in the basement of St. Athanasias Church. Fr. Jimmy and Sr. Joanie [Chittister] are leading the sessions. There are sixteen participants and Fr. Jimmy and Sr. Joanie split the group in half so each leads a small group discussion. In the introductory session, Fr. Jimmy explained that they will study one chapter at each meeting. The initial meeting was get-acquainted time and set the boundaries.

Fr. Jimmy told the group that there are no wrong answers and everyone's input is welcome. Nobody has a corner on the truth and everybody's opinion is equal. Topsy and Tuptim gave each other a look when he said that, but resisted eye-rolling. Topsy is in Fr. Jimmy's group and Tuptim is in Sr. Joanie's.

The study group has finished the first chapter and Tuptim and Topsy stop at the coffee shop on the way home to discuss their initial impressions and the content of chapter one. Listen in.

Topsy: All I can say is they have the worst coffee I've ever tasted -- like dishwater. Yuck! (Speaking to the woman at the counter) I'll have a large extra bold with cream. (Turning to Tuptim) After that session I need it!

Tuptim: I think they waved the coffee beans over the pot. (Places her order for a medium plain dark black coffee.) That watered-down coffee may be a metaphor for what we’re getting.

Topsy: I stopped to make a visit before the meeting. Oy! Talk about a wreckovated church! It must have been beautiful once. They have a confessional in the back that they’re using as a broom closet.

Tuptim: How do you know that?

Topsy: The janitor was taking the vacuum cleaner out. And I looked at the book rack in the vestibule. America, USA Today, the National Catholic Reporter....This is definitely not your grandmother’s parish!

Tuptim: You know, I was thinking about what you would expect to find in a church document about the challenges facing the family. Before even reading the first line, a faithful Catholic ought to recognize what will be in it. What do you think the pope should address? Let's see if his topics agree with ours.

Topsy: Looking at my nuclear family, my extended family, and the general culture I'd say...hmmm...abortion, of course. It attacks the most vulnerable member of the family. Contraception: it attacks the love between husband and wife and...um...cohabitation, invalid marriage. Then there's the societal attack on parental authority especially in the schools with sex ed, gay clubs, explicit books. Oh gosh, the list for the schools is endless. Pornography everywhere....(sighs) Need I go on?

Tuptim: Well, judging from the Synod last fall, they didn’t really raise those issues because they weren’t the REAL issues the pope was aiming at. Don't you think his issue and Cardinal Kaspar's was only ever to address the problem of divorced and remarried Catholics receiving Holy Communion? THAT was IT really.

Topsy: (Sighing) You may be right. So what did you think of the first chapter? I started getting red flags in the prologue when I saw "unity of teaching and practice are necessary, BUT." Sounds like, "I'm pro-life, BUT." And the pope quoted the Synod saying the desire to marry remains "vibrant" among young people? Where'd they get that? Not from the U.S. for sure! Sixty percent cohabit before marrying and statistics, show a big drop in marriage with many having no intention of ever marrying. (Laughing ruefully) Call that a "vibrant" desire for marriage?

Tuptim: Not at all! There is no desire for young people to marry anymore. Why should they marry since we live in a secular society where the fashion these days is for young girls to have a baby with no father - no father, that is, except to impregnate the girl.  The girls get pregnant on purpose to have someone to love I suppose, then live with their parents and while the grandmother babysits, the girl gets a low-level job because, since she dropped out of highschool to have the baby, she has no education.

Topsy: I know. A friend whose daughter graduated from high school 5 years ago said that over HALF the girls in her graduating class are single mothers with one or more babies. Their goal in life was to get pregnant and have a baby. Some reached their life's goal at 15!

Topsy: Do you know what Fr. Jimmy said tonight in class? He said that Pope Francis knows that if he can just tip the scale of the balance between pastoral practice and doctrine a little bit towards the pastoral side, the lived faith for many people will change and ultimately doctrine will change. The process would take time but a process like this affects exchange that is hard for some future pope to undo. He actually used the word EXCHANGE instead of CHANGE, I think because something would not actually change as such, but rather one entity would be exchanged for another.

Tuptim: Sounds creepy to me. Sort of as if Francis is hovering over doctrine with his magic wand and poof! Suddenly doctrine is not CHANGED but rather before our eyes by sleight of hand, he actually EXCHANGED doctrine for pastoral practice. Doctrine would disappear out that same window where the smoke of Satan entered in, and Pastoral Practice would take its place reigning supreme...capital Ps on that too. I need more coffee. How about you?

They get their refills and continue....

Topsy: It's really sad too because so much of Chapter 1 is eloquent and beautiful. All the scripture quotes? And the discussion of the Passover meal...I especially loved the quote about teaching the glorious deeds of the Lord to the children and future generations.

Tuptim: (With a rueful laugh) Yeah, how much teaching have the children received in the past few generations? That's another topic for the list of family challenges. Not much discussion about the loss of faith due to heretical or non-existent catechesis. 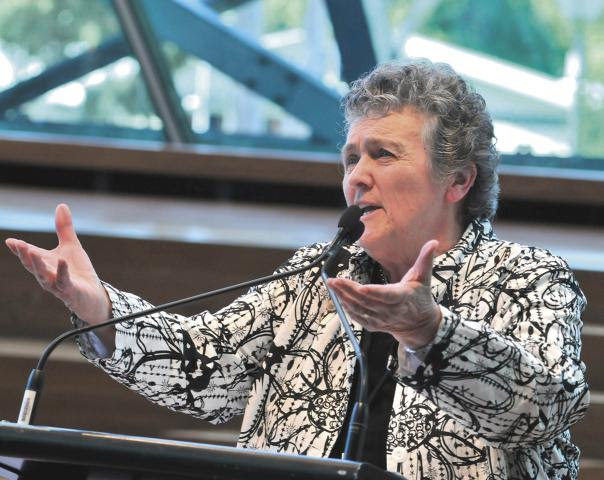 Tuptim: (Looking puzzled) Not sure what you're getting at.

Topsy: Well, he talks about the sins from social degeneration that result in unemployment, poverty, refugees, humans ravaging nature, etc.. He calls people to look to the Holy Family as an icon even in the midst of, I think he wrote, "burdens and nightmares" specifically mentioning Herod's violence.

Tuptim: Right, I remember that.

Topsy: But not one word about the greatest threat to the family, the murder of its youngest members by abortion. You know, like what Herod did to the Holy Innocents! Well...hopefully, he'll introduce it later, but I'm not holding my breath since he thinks we all talk about it too much. (Finishing her coffee) I'm bringing my own coffee to the next meeting. Can't wait to see what Sr. Joanie's wearing.

" Don't you think his issue and Cardinal Kaspar's was only ever to address the problem of divorced and remarried Catholics receiving Holy Communion? THAT was IT really."

....I don't think so. I think this is all just a stepping stone to the real 'prize'...legitimize and sanctify sodomy. This pope's 'Joy of Sex' is one more tenderizer to consciences and the culture, and it's all moving at breakneck speed.

What are the problems facing modern families? In my experience, the top three are:

* Kids have not been taught the Faith. As my Godson's mother once lamented, his Catholic school was teaching him more about Buddhism than about Catholicism.

* Pornography is universally available through the Internet. And most boys and men succumb.

* The escalating financial cost for a couple to buy a house and establish a family. (A middle class issue perhaps, and Pope Bergoglio has commented that he ignores these.)

A quick field report. My family and close friends have twelve kids, all of marriageable age. Three married, all outside the Church. One has a de facto and had an abortion. The rest show no signs of getting married. Yep, there is a marriage and a demographic crisis!

Very insightful comments. Topsy and Tuptim will probably use your opinions in a future discussion. I'll pass them on to the ladies.

Susan.....you absolutely hit the nail on the head. I have always contended that the 'civil marriage' issue was only a Trojan Horse. The REAL issue, or the brass ring, if you like, is the introduction of sodomy as 'natural and acceptable' in the Church. Don't remember if I already posted this part yet, but Cardinal Dolan gave it away a week or so ago when he said: (I'm paraphrasing here) 'I wish there were people beating down my doors to be received into the Church and receive Communion, but they're just NOT THERE.'!! Hmm....there really are not that many in 'civil marriages' that even go to Mass anymore as far as I have seen and heard, so the big deal is??? The big deal is 'regularizing sodomy'.