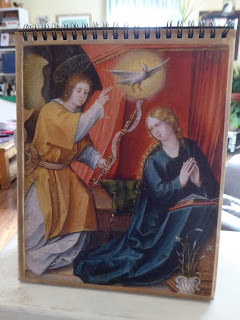 My experiment with ads is turning out to be both good and bad. On the good side, I had an ad pop up for a rosary aid which is a book of beautiful  art works with a built in stand that depicts the fifteen traditional mysteries of the rosary. I find meditating much easier when I have a picture. My mind is less likely to wander off into the weeds of distraction. I bought one.

On the other hand, one of Richard Rohr's books keeps popping up and I would hate to mislead someone into thinking Fr. Rohr is a good source for anything except analyzing a heretic. I haven't asked CatholicAdNet whether I have any control over the pop-ups on the site. Assuming I do, I will ask them not to advertise  Richard Rohr on my site or anything from St. Anthony Messenger. And God forbid that the National Catholic Reporter should pop up, but they haven't yet as far as I've noticed. Most of the sites seem to be fine.

That said, even so-called Catholic groups can be misleading these days, so Catholics need to be vigilant and know who is to be trusted and who is not. So keep an eye on the ads, click on the good ones if you are so inclined, and leave Richard Rohr to the heretics and dissenters.


We live in sad times when so many claim to be Catholic who are anything but.

Liberal Catholics, especially politicians, specialize in lying. They describe themselves as "devout" (No, Nancy, Joe, and Tim -- YOU AREN'T!) while they work tirelessly to kill the unborn and attack other "vulnerable" populations, a term they use referring to Black Lives Matter activists and the LGBTQXYZ crowd but never to black babies being killed in a genocidal killing spree.

Of course, our boys in blue aren't considered vulnerable while they're gunned down in our cities and towns and lured out to be ambushed. Nope! In fact, did you hear about the Congressional Black Caucus and their "police  as pigs" painting? Talk about a group of deplorables! (You know, what would people say if there were a "white caucus" in Congress? Just askin'.)

Ah well, I've drifted off track. I'm very pleased with my rosary aid and I invite you to consider one for yourself. I've been collecting calendar photos of paintings for several years that show the mysteries of the rosary and I may make myself a custom book for meditation. In the meantime, this easel version is beautiful and I will definitely enjoy using it when I pray the rosary!

Yeah, I was going to warn you about St. Anthony Messenger, but I see you figured them out before I got the chance. I'm not necessarily telling you to nix the ads, but I do think it would be a wise thing to take the matter to prayer.

Where is the calendar from?


It's not a calendar, Dymphna. It's a flip book of artworks of the 15 decades of the rosary. They offer a separate one of the Luminous Mysteries.