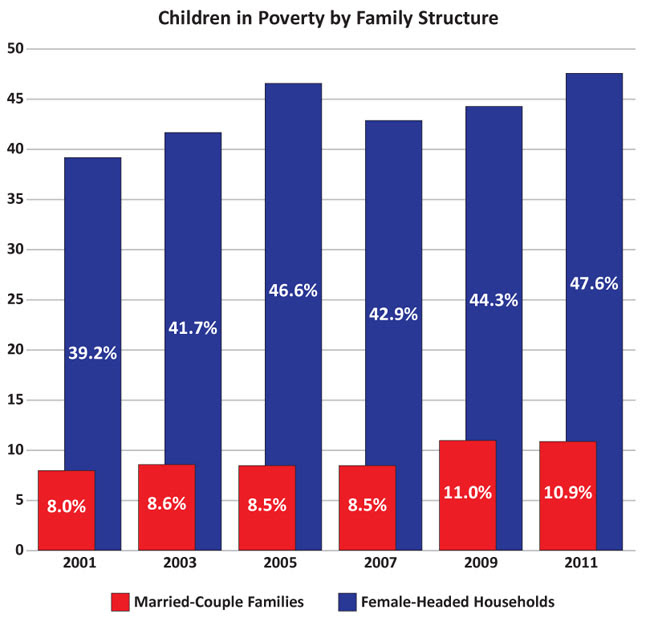 Dymphna has a great post on the dangers of single motherhood and the demonization of men. Lyndon Johnson, a well-known racist, developed the "Great Society" because he wanted to guarantee a black vote for the Democrats by distributing goodies paid for by the taxpayer. In other words, let's just bribe 'em so they continue to obey Massah's voting orders on the liberal plantation.

The results of Johnson's policies were disastrous. Daniel Patrick Moynihan pointed out the problems in 1965 and rightly said efforts needed to be made to strengthen the black family. Johnson did just the opposite (He wasn't the least bit interested in blacks except as voters.), booting out fathers and providing a lucrative lifestyle even for teenage girls who wanted out from under their mothers' thumbs.


As Dymphna points out, her relative on welfare with out-of-wedlock children made more from Uncle Sammy's handouts than Dymphna did working. Now isn't that the way to provide incentives for a healthy economy?

The consequences of fatherlessness are disastrous. Look at the statistics on crime, poverty, education, and suicide. The bedrock of a society is its stable families where the parents care for one another and together focus on the healthy development of their children. The collapse of the family came first to the black family, but what welfare did to them no fault divorce did to white families. And gender insanity will continue the devastation to the family in the years ahead. We need a moral revolution to turn things around, so let each of us make that commitment for our own families.

We should urge Donald Trump to develop policies that strengthen the American family. That would provide more benefits to the U.S. than any other single thing he could do.
Posted by Mary Ann Kreitzer at 4:57 PM

If people had listened to Patrick Moynihan untold tragedies could have been avoided.