Another "Kind" Democrat Leader Hopes President Trump Will Be Assassinated

Can you imagine if a Republican State Senator had tweeted or posted on Facebook a wish for Obama's assassination like Missouri Democrat State Senator Maria Chappelle-Nadal did about President Trump? Yikes! We'd be still hearing about it years later. Would you like to see this woman elected to even higher office? How would she feel if folks were publicly wishing for her assassination? There is nothing kind or tolerant about liberals. Many are godless and filled with hate for anyone with whom they disagree. I hope the FBI investigates whether she has any links with Antifa which is an anarchist and communist hate group.


Her statements about Charlottesville and condemning the president who dared to call out the violence on BOTH sides (the fascists vs. the commies) implies that she approves of Antifa. And her vicious, violent rhetoric also echoes their message.

So exactly who are these Antifa folks and what do they stand for? Well, one indication comes from Amazon.com which shows what those who buy the Antifa flag also buy. Check out this screenshot I took today. (Hat tip to my brother Ray.) 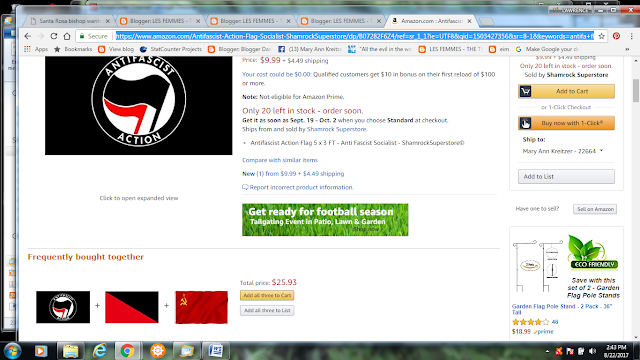 At the bottom it shows that those who buy the Antifa flag also buy the red/black anarchist flag and the communist flag. These folks want to take down the United States. They hate our history. They hate God. They hate patriotism. And, above all, they hate President Trump and will do anything they can to destroy him. And they have plenty of help from the mainstream media who are happy to gorge on every benefit America has offered them while they work to destroy her. God have mercy on them.

Since retreat I'm praying harder than ever. Join me in a rosary today for our President's safety and for our nation. Please share this.
Posted by Mary Ann Kreitzer at 3:06 PM

Is this the kind of "kindness" the people at the gazebo sign about? You know, the sign that says, "Make America kind again."?

Yep. Now we need to educate the naive. http://nonvenipacem.com/2017/08/22/antifa-rapidly-approaching-the-flash-point/