Trump's Speech to the Scouts was What? And the Boy Scouts Apologized Why?

Is anyone really surprised that the spineless leaders of the Boy Scouts who caved into the politics of the LGBTQXYZ lobby, would cave in to the liberals attacking Trump's speech at the Scout Jamboree last week? I'm not. I listened to the speech after somebody commented on my blog about how "scary" it was.

Are you serious? And then there are the talking heads who claimed it was all political.

The 39 minute speech was inspiring and upbeat and only a few minutes were political by any stretch. Trump praised the values and accomplishments of the Boy Scouts and was interrupted again and again by cheers and applause and chants of "U.S.A."

The reaction from the Trump-haters, however, is exactly what one would expect -- twisting and perversion of a great speech and another accusation of his being "unhinged." They did the same thing about his great speech in Poland. The Poles loved it and broke out in cheers and gave him a standing ovation at its conclusion. The Boy Scouts showed the same enthusiasm bursting into applause and cheers again and again.

What did Trump say? Watch the speech. I've posted it at the end. But I've also transcribed some of the highlights. The primary tone of the talk was upbeat and inspiring with a few political comments as asides -- like saying that Obama never attended a Jamboree. There was little for a patriotic American to take offense at in this speech. Trump-haters could pick and choose. Maybe it was his saying he was going to make it respectable to say "Merry Christmas!" again. How non-inclusive and politically incorrect!

So let's check out some of the speech. 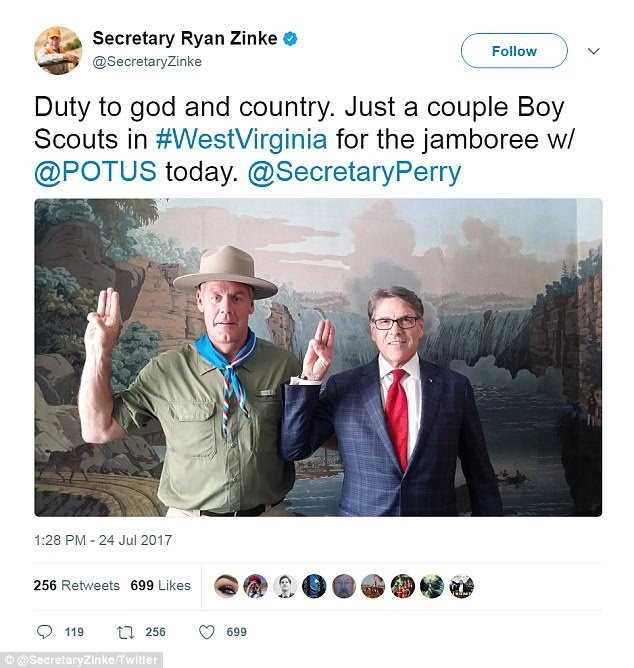 Trump began by praising the Scouts. "You are the young people of character and integrity who will serve as leaders in our communities and uphold the sacred values of our nation." Goodness, he used the offensive words character, integrity, and sacred.

Then he thanked all the leaders and volunteers especially the "moms and dads" who make scouting possible and make it a "life-changing experience" for young people. "When you volunteer for scouting, you are not only shaping young lives, you are shaping the future of America." Well, the gays, transgenders, and the educrats no doubt were offended because he didn't acknowledge the diversity of families.

And then there was this offensive statement. "The United States has no better citizens than its Boy Scouts....The values, traditions, and skills you learn here will serve you throughout your lives. And just as importantly they will serve your families, your cities, and in the future and in the present will serve your country. The Scouts believe in putting America first." Oh my goodness, he actually praised the values and traditions of our evil country founded by old white men who were slave-holders!

Then Trump introduced some of the former Scouts in his administration. "I rely on former Boy
Scouts every single day. It's amazing how many Boy Scouts we have at the top level....Ten members of my cabinet were Scouts. Secretary of State Rex Tillerson is not only a Boy Scout, but your former National President." Trump also mentioned Vice President Mike Pence and introduced Secretary of the Interior Ryan Zinke an Eagle Scout from "big sky country in Montana." Another Eagle Scout, Energy Secretary Rick Perry, was there as well. Trump announced that we would soon be exporting energy instead of depending on the rest of the world for our energy. Then he introduced another Scout, Tom Price, Secretary of Health and Human Services. What a political message for the kids. Hey, some day you might grow up and be a high level political appointee. For shame!

Trump lauded the love he saw at the Jamboree saying, "There's a lot of love in this big beautiful place. A lot of love and a lot of love for our country.... Boy Scout values are American values.... A Scout is trustworty, loyal. We could use some more loyalty. Here you learn the rewards of hard work and perseverance. Never ever give up, never quit. Persevere, never quit! You learn the satisfaction of building a roaring campfire, reaching a mountain summit, or earning a merit badge after mastering a certain skill. There's no better feeling than an achievement you've earned with your own sweat, tears, resolve, hard work -- nothing like it!" And he paused and asked, "Do you agree with that," the field erupted in cheers and applause. Would the media be happier if he said. "Get real, you didn't build that?"

He went on saying, "Through Scouting you also learn to believe in yourself and have confidence in your ability, and to take responsibility for your own life. When you face down new challenges, and you will have plenty of them, develop talents you never thought possible, and lead your teammates through daring trials ,you discover that you can handle anything. And you learn it by being a Scout. It's great!" Whoa! What a scary message.

"You can do anything. You can be anything you want to be, but in order to succeed you must find out what you love to do -- you have to find your passion....Never quit, never give up, do something you love....And you're ultimately going to be successful....When you do something you love, remember this. It isn't work....When you aren't doing something you like...that's called work and it's hard work and tedious work. So as much as you can, do something that you love, work hard, and never give up and you're going to be tremendously successful." Wow! What a political statement!

When Trump mentioned election night and the red map, he received cheering and applause. And his discussion of the election followed his statements urging the Scouts to work hard and never quit and make America great again. He was talking about not listening to the negative voices that said his campaign could not do it. The context was completely appropriate. The crowd went crazy cheering and yelling "U.S.A., U.S.A."

Near the end of his speech, Trump talked about the Boy Scout pledge. "The words duty, country, and God are beautiful words." Not to liberals!  "Basically, you are pledging to be a great American patriot.... Last year you gave more than 15 million hours of service in your community....When natural disaster strikes, when people face hardships, when the beauty and glory of our outdoor spaces must be restored and taken care of, America turns to the Boy Scouts, because we know that the Boy Scouts never, ever, ever let us down. Just like you know you can count on me; we know we can count on you because we know the values that you live by. Your values are the same values that have always kept America strong, proud, and free." And that's the problem. The one-worlder globalists hate a "strong, proud, and free" America and their goal is to take her down.

"Generations of Boy Scouts have sworn the same oath and lived according to the same law. You inherit a noble American tradition and, as you embark on your lives, never cease to be proud of who you are and the principles you hold dear and stand by.  Wear your values as your badge of honor.... Let your scouting oath guide your path from this day forward. Remember your duty, honor your history, take care of the people God put into your life, and love and cherish your great country. You are very special people. You're special in the lives of Americans. You're are special to me. But if you do what we say, I promise you that you will live scouting's adventures every day of your life and you will win, win, win, and help people in doing so. Your lives will have meaning and purpose and joy. You will become leaders and you will inspire others to achieve the dreams they once thought were totally impossible. ...If you do these things and if you refuse to give into doubt and to fear, you will help America become great again. You will be proud of yourself and proud of the uniform you wear and be proud of the country you love. And never ever forget, America is proud of you!

Finally in closing, "This is a very very special occasion for me.... and I just want to end by saying God bless you, God bless the Boy Scouts, God bless the United States of America...and go out and show me there is nobody, nobody like a Boy Scout!"

It was a great speech! Watch it for yourself instead of listening to the Trump-haters. Transcript here.

And what kind of welcome did Trump receive?