Thought for Sunday: If you want to restore your sanity...

My husband and I belong to a square dance camping club. We dance and camp one weekend a month from April through October. This weekend we were at Colonial Beach and took along two little granddaughters to join in the fun. And fun it was! We swam in the pool, played mini golf, went to a thrift store, ate ice cream, line danced, did the hokey pokey, ate more ice cream, admired the many murals in town, waded in the river, walked out on the pier and met a fisherman from Woodbridge who showed us his catch including a fat catfish and some "spots" who were gasping which was a little disturbing to two little sensitive animal lovers who have a tank full of fish, three turtles, and a bunny back home.


The girls collected stones, road their bikes all over the campground, climbed the ladders at the playground, ate colored ice, fed bits of ice cream cone to the seagulls and ducks, and wiggled their toes in the sand. We had a doughnut get-together Sunday morning where lots of club members told us how wonderful our granddaughters are while the girls drank hot chocolate and shared a lemon-filled doughnut until a yellow jacket wanted his share. We had an all-around terrific time! We went to the vigil Mass at St. Elizabeth of Hungary where the priest celebrated ad orientem, incensed the altar and the Eucharistic gifts, and the congregation received the Body and Blood of Christ kneeling at the Communion rail. What a gift!

We prayed the rosary, talked about the little children of Fatima and hugged a lot. I heard, "I love you, Grandma!" so many times I lost count. And so many times I had a little one climbing up on my lap for a cuddle. I'm still basking in the warmth.

We ate dinner at a restaurant along the boardwalk where a group from the Colonial Beach Waterfest were also dining. Among their group were a pirate ("Argh, matey!) and a mermaid who gave the girls little pearls from the sea. We took photos of the many murals in town and admired the "trash can art" on the wall of the food court.

We all had mixed feelings this morning as we packed up the camper, stowed the bikes in the back of the Yukon, and waved good-bye to our friends. The girls looked forward to seeing Mommy and Daddy and their two little brothers, but also were sad to leave.

In a world gone mad, where children are bought and sold and murdered on demand, loving and praying Christian families are the prescription for sanity.

Enjoy your children and grandchildren; hold them close. They are, as Carl Sandburg once said, "God's opinion that the world should go on." Despite everything, He clearly hasn't given up on us yet.

Lord Jesus, thank you for little children. Protect them as St. Joseph protected you in the bosom of the Holy Family.

St. Jacinta and St. Francisco, youngest non-martyr saints of the Church, pray for us. 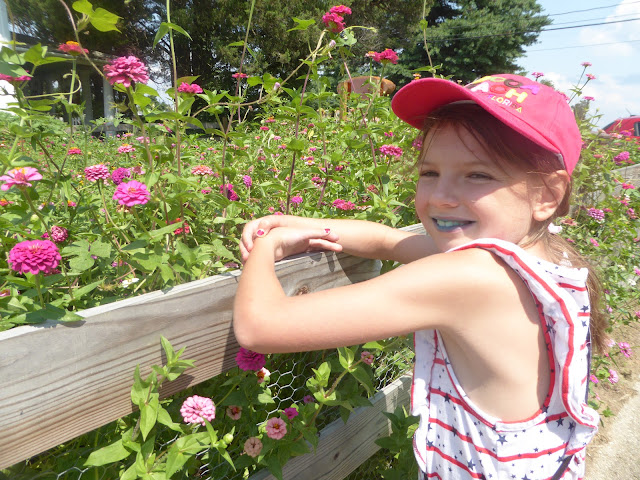 Guess what kind of icee this little lady had.
Posted by Mary Ann Kreitzer at 8:31 PM

How wonderful for you and your granddaughters! I am sure that they will remember this trip with you and your husband for the rest of their lives. Grandparents are awesome!

You are good grandmother...God bless you!