St. Ignatius of Loyola vs. Martin Luther -- NO CONTEST!

I saw this photo at the Badger Catholic and had to share it. I'm going on my annual 5-day silent retreat using the Spiritual Exercises next week. Our retreat master, Fr. James Buckley is an FSSP priest, so we will have the Tridentine Mass every day. How glorious that will be, especially on the Feast of Our Lady's Assumption. Thanks be to God. I will be praying for all my readers and their families. Please pray for me as well. In the meantime, rejoice at all the saints who fought heresy and error and passed on the authentic Catholic faith with zeal. 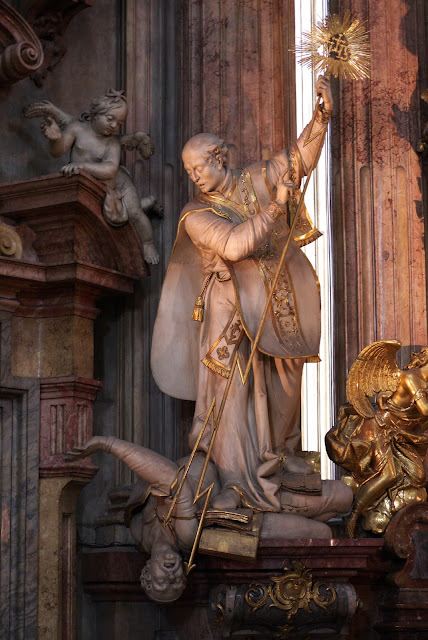 And while I'm talking about saints who fought heresy, I want to honor my own Confirmation patron, St. Dominic whose feast day is today.

St. Dominic is, indeed, a saint for our time because he fought the Albigensian heresy that believed there were two opposing creative principles, one good and one evil. The evil creator made all material things which were the cause of all sin. The good creator made the human soul which the evil principle imprisoned in the body. We see that same dualism today in the war against marriage and family and the elevation of assisted suicide and the murder of the innocent:

The dualism of the Albigenses was also the basis of their moral teaching. Man, they taught, is a living contradiction. Hence, the liberation of the soul from its captivity in the body is the true end of our being. To attain this, suicide is commendable; it was customary among them in the form of the endura (starvation). The extinction of bodily life on the largest scale consistent with human existence is also a perfect aim. As generation propagates the slavery of the soul to the body, perpetual chastity should be practiced. Matrimonial intercourse is unlawful; concubinage, being of a less permanent nature, is preferable to marriage. Abandonment of his wife by the husband, or vice versa, is desirable. Generation was abhorred by the Albigenses even in the animal kingdom. Consequently, abstention from all animal food, except fish, was enjoined. Their belief in metempsychosis, or the transmigration of souls, the result of their logical rejection of purgatory, furnishes another explanation for the same abstinence. To this practice they added long and rigorous fasts. The necessity of absolute fidelity to the sect was strongly inculcated. War and capital punishment were absolutely condemned.

Does this sound like the culture of death we live in? St. Dominic gave us the perfect weapon through Our Lady, the rosary.

Today, I'm asking the intercession of St. Dominic and St. Ignatius to raise up more warriors among the clergy to fight for orthodoxy and against the heresies of our age. And I'm praying for more laity as well to embrace the rosary in the battle against evil.

St. Ignatius and St. Dominic, pray for us!

Thanks for the prayers...you have mine. God bless you and your entire family! Mariann


My wife and I were married in St Dominic's Priory, London, many years ago.
I hope that your Retreat goes well.
Please remember us in your prayers.
Thank you.

Thanks Mariann and Umblepie, I appreciate the prayers and you will surely have mine, especially at Mass.