Sounds like Superfragilisticexpialidocious, It's Actually The Growing Religion in America 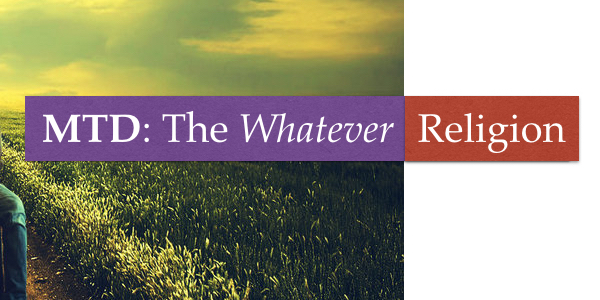 Christian Smith, Professor of Sociology at Notre Dame University, co-authored a book with Melinda Lundquist Denton in 2005 titled, Soul Searching:  The Religious and Spiritual Lives of American Teenagers.  They suggested that the “de facto” dominant religion among contemporary teenagers in the United States was what one might call “Moralistic Therapeutic Deism.”  They proposed that the creed of that religion,
which they based on a large number of interviews with teens, was this:


1.     A God exists who created and orders the world and watches over human life on earth.


2.    God wants people to be good, nice, and fair to each other, as taught in the Bible and by most world religions.


3.    The central goal of life is to be happy and to feel good about one self.


4.    God does not need to be particularly involved in one’s life except when he is needed to resolve a problem.

Smith wrote, “Such a de facto creed is particularly evident among mainline Protestant and Catholic youth but is also more than a little visible among black and conservative Protestants, Jewish teens, other religious types of teenagers, and even many ‘nonreligious’ teenagers in the USA.  Smith said that while they don’t actually call their beliefs by the name, “Moralistic Therapeutic Deism” that is in fact what it can be summarized to be.  This religion, according to Smith and Denton is “about inculcating a moralistic approach to life.  It believes that central to living a good and happy life is being a good, moral person.  That means being nice, kind, pleasant, respectful, and responsible; working on self-improvement; taking care of one’s health; and doing one’s best to be successful.”  When asked, one teen from Maryland who described herself as nonreligious said,


“Morals are good if they’re healthy for society.  ……I think every religion is important in its own respect.  …It’s just whatever makes you feel good about you.”


What’s “therapeutic” about it?  In this de facto religion, according to Smith and Denton, feeling good about oneself is an essential aspect of living a moral life.  Smith said,


“This is not a religion about repentance from sin, of keeping the Sabbath, of living as a servant of a sovereign divine, of steadfastly saying one’s prayers, of faithfully observing high holy days, of building character through suffering, …  Rather, what appears to be the actual dominant religion among teens is centrally about feeling good, happy, secure, at peace.  It is about attaining subjective well-being, being able to resolve problems, and getting along amiably with other people.”


Thus, said Smith, “service to others can be one means to feeling good about oneself.”  And, “as long as one is happy, why bother with being able to talk about the belief content of one’s faith?”  Most of the time, as Smith put it, “the God of this faith keeps a safe distance.  He is often described as ‘watching over everything from above.’ “


“..is not demanding.  He actually can’t be, since his job is to solve our problems and make people feel good.  In short, God is something like a combination Divine Butler and Cosmic Therapist----he is always on call, takes care of any problems that arise, professionally helps his people to feel better about themselves, and does not become too personally involved in the process.”


Where do teens get these ideas?  From their parents in most cases who believe as they do and from the lack of real religious training that would impress on them any other means of pleasing God and being saved from eternal damnation.
There is no official religion called Moralistic Therapeutic Deism, but this is in fact “colonizing many established religious traditions and congregations in the USA, that it is merely becoming the new spirit living within the old body.”  Followers of this creed are often either devout followers or mere nominal believers of other traditional faiths, according to Smith.


“The Jewish version, for instance, may emphasize the ethical living aspect of the creed, while the Methodist version stresses the getting-to-heaven part.  Each can think of themselves as belonging to the specific religious tradition they name as their own, while simultaneously sharing the cross-cutting, core beliefs of their de facto common Moralistic Therapeutic Deist faith.  In effect, these believers get to enjoy whatever particulars of their own faith heritages appeal to them, while also reaping the benefits of this shared, harmonizing, interfaith religion.  This helps to explain the noticeable lack of religious conflict between teenagers of apparently different faiths.  For, in fact, we suggest that many of them actually share the same deeper religious faith:  Moralistic Therapeutic Deism.  What is there to have conflict about?”


Well, what does it matter anyway?  It matters because it has a serious impact on our culture.  Smith said, MTD may be nudging American civil religion in a ‘softer,’ more inclusive, ecumenical, and multi-religious direction.  ………..All can then together hold hands and declare in unison, ‘Each person decides for himself/herself!’


The authors suggest that those among us who appear to have no faith at all, in fact, have developed a kind of “shared religion” that does not require going to church, or worrying about salvation.  After all, they are “good people” and they believe that’s all that counts.  Who goes to hell anymore anyway, right?  Hitler and Stalin are both dead.


“Moralistic Therapeutic Deism appropriates, abstracts, and revises doctrinal elements from mostly Christianity and Judaism for its own purpose.  ………it functions to foster subjective well-being in its believers and to lubricate interpersonal relationships in the local public sphere.  [It] exists, with God’s aid, to help people succeed in life, to make them feel good, and to help them get along with others. 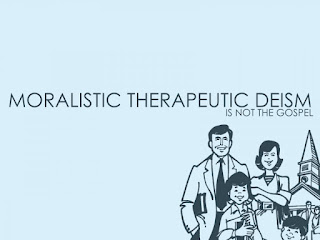 The language---and therefore experience---of Trinity, holiness, sin, grace, justification, sanctification, church, Eucharist, and heaven and hell appear, among most Christian teenagers in the United States at the very least, to be being supplanted by the language of happiness, niceness, and an earned heavenly reward.  It is not so much that Christianity in the United States is being secularized.  Rather more subtly, either Christianity is at least degenerating into a pathetic version of itself or, more significantly, Christianity is actively being colonized and displaced by a quite different religious faith.”