We welcome our guest author today who is writing about the "Red Rose Rescues" a peaceful movement to offer mothers in abortion centers the support to carry their babies to term. These peaceful pro-lifers go into the abortion facilities and give the mothers red roses, the symbol of precious babies in the womb, with a promise of assistance and a list of resources. Please read and share. Only when we begin to act like abortion is the tragedy it is and are willing to risk our own lives and freedom for the little ones and their moms will things change. The sacrifice of those who stand in unity with the infants, the tiniest of God's least ones, is the yeast that will leaven the culture of life and make it grow and spread. God bless all the dear ones participating in the Red Rose Rescues! I pray for the courage and energy to rejoin the rescue movement personally. 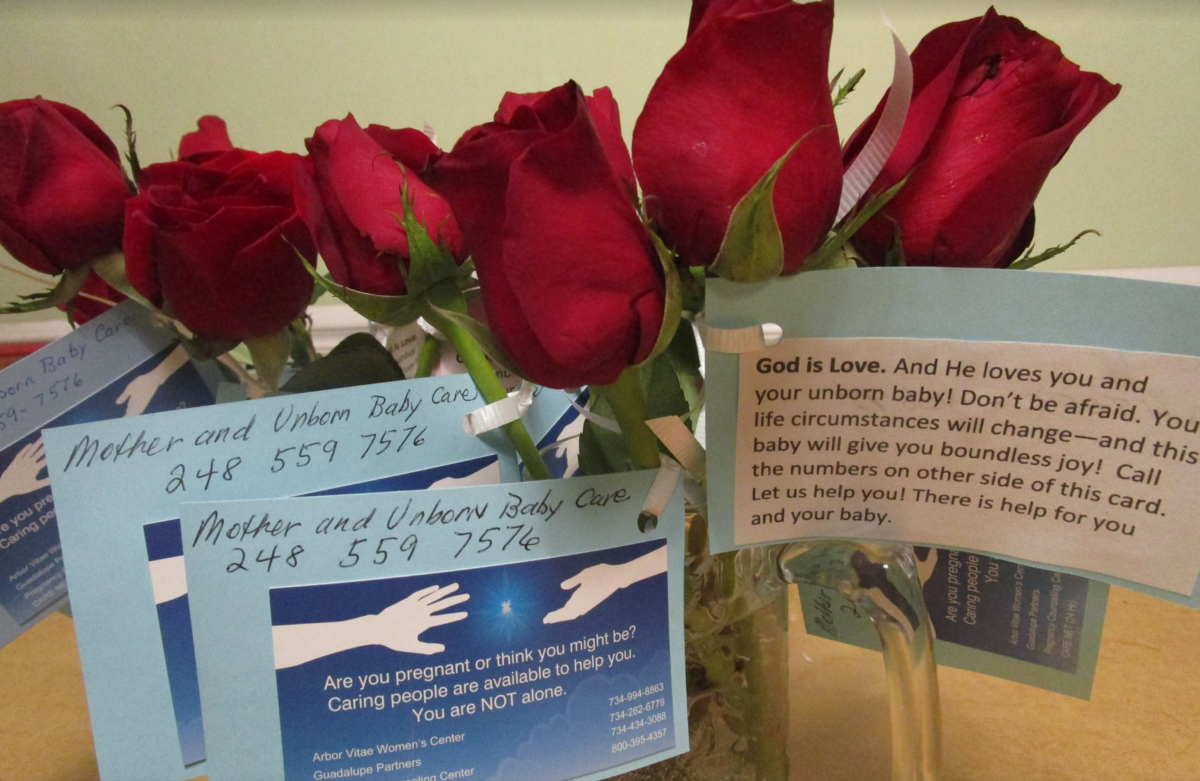 For reasons not overly obscure the Orwell memory hole of our era has chosen to bury the most extensive and popular expression of non-violent civil resistance in American history: it nonetheless remains that in terms of incidents, arrests, and incarceration no other social struggle against injustice in this country comes remotely close to the movement that began even before Roe v. Wade, and came to be known as Operation Rescue.

Yet while it has never died out altogether, the popular quality that saw nearly 100,000 Americans arrested for rescue between 1988 and 1991 faded for numerous reasons by 1992:
and, in passing, it was only in the following year that the first of a half dozen shootings of abortionists since then took place. And though each of these killings provoked pro-abortion demands that opposition to abortion itself was responsible and must therefore cease, it is in reality a testament to America’s massive resistance against legal abortion via rescue and so many other venues, that use of violence to end the slaughter has been both so utterly rare, and so effectively repudiated by the people who have upheld that resistance.
Nonetheless, since recent rescues have among a few abortion opponents provoked uneasiness and even a video expressing such from a group called Sidewalk Advocates for Life (SAL) - an otherwise noble organization dedicated to witness sans rescue outside the camps where children are exterminated - it might do well to recall another movement of civil resistance in order to address their concerns. For in fact Dr. M. L. King’s famous and indeed deservedly iconic letter from a Birmingham jail to people he considered ‘men of genuine good will’ reads with but superficial changes as though it had been written directly in response to SAL’s video.

‘Why direct action? Why sit-ins?’ friends of Dr. King asked, as implicitly does SAL of rescue. ‘You

express a great deal of anxiety over our willingness to break laws. This is certainly a legitimate concern’ but ‘the answer lies in the fact that there are two types of laws, just and unjust,’ and just as ‘one has not only a moral responsibility to obey just laws,’ so ‘conversely, one has a moral responsibility to disobey unjust laws’ – for King held, as do rescuers (and any sane person), ‘with St. Augustine that “an unjust law is no law at all.”’

Dr. King’s letter then effectively upholds the very foundation of rescue, and particularly the Red Rose rescues of recent vintage inspired by the extraordinary witness of Mary Wagner: ‘One who breaks an unjust law…and willingly accepts the penalty of imprisonment in order to arouse the conscience of the community over its injustice, is in reality expressing the highest respect for law.’

One might add as well that Wagner, who has spent years in jail simply for handing roses to and encouraging women in the killing camps to protect their children, and Linda Gibbons who’s given ten years of her life inside for this end, do even more: for by imitating Christ in turning themselves over to their enemies, and thereby voluntarily sacrificing the good of life they are otherwise entitled to pursue, they witness as surely nothing else quite can to the value before God and man of all the children who’ve been killed. In fact, by absorbing unto themselves some measure of the injustice inflicted on the innocent, while Wagner or Gibbons or anyone else rests in jail, not one child dies anywhere without a vivid public testimony to the worth of that child – in Heaven as well as on earth.

There is also, very much to be sure, no small element of witness in the valuable, difficult, and amazingly steady witness by the thousands who daily and weekly have for decades stood outside the killing centers not only saving countless lives, but also upholding the value of the lives they couldn’t save.

And this of course emphatically includes the people of SAL, which makes it especially a shame their video accepts so many premises of the unjust laws that exterminate the innocent, and seems willing for now to accept them as long as they are themselves not threatened. For painfully, SAL argues against rescue because they fear it might provoke hostility to them from the killers and their political henchmen, as if the latter have not already made clear that with or without rescue, their goal is not only to stop sidewalk counselors, but to criminalize any public opposition to abortion from any source.

Against such ‘an obnoxious peace, in which [injustice is] passively accepted,’ Dr. King’s letter extols instead ‘a substantive and positive peace, in which all men will respect the dignity and worth of human personality;’ and held further that any ally ‘more devoted to “order” than to justice…who constantly says: “I agree with you in the goal you seek, but I cannot agree with your method of direct action,”’ were guilty of a ‘shallow understanding’ that, when it came ‘from people of good will,’ he considered ‘more frustrating than absolute misunderstanding from people of ill will. ‘

Allow these observations to close with, again, what reads very much like a direct response from Dr. King to the ‘desperate measures’ that titles SAL’s video. ‘We who engage in nonviolent direct action,’ he writes ‘are not the creators of tension. We merely bring to the surface the hidden tension that is already alive. …Like a boil that can never be cured so long as it is covered up must be opened with all its ugliness…injustice must be exposed, with all the tension its exposure creates...before it can be cured.’

‘Now is the time to lift our policy from the quicksand…of injustice to the solid rock of human dignity.

‘The time is always ripe to do right.’

Richard Cowden Guido is the editor of The Prison Letters of Joan Andrews, and author of: A History of Operation Rescue 1970-1990 and John-Paul II and the Battle for Vatican II.
Posted by Mary Ann Kreitzer at 5:15 PM

A welcome corrective. The moon need not fear the light of the sun.