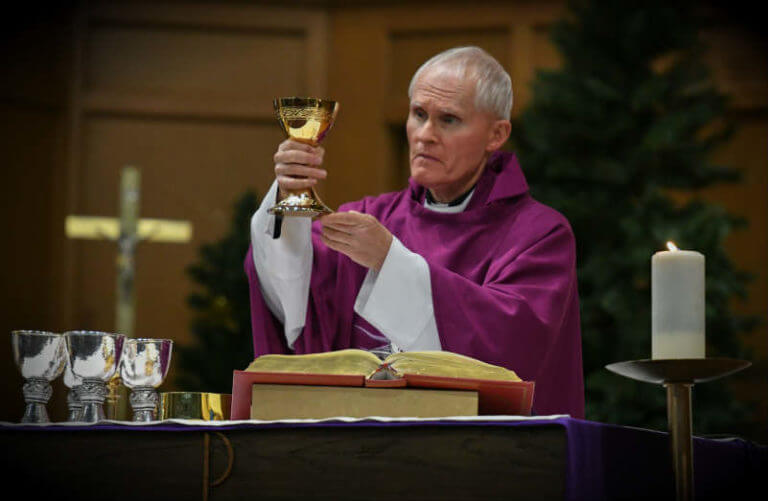 Baltimore Auxiliary Bishop Mark E. Brennan has been named by Pope Francis to head up the
Diocese of Wheeling-Charleston. Can anything good come out of Baltimore? Let's hope so. Let's pray so.

UPDATE 7/23: I received this email today from a friend in West Virginia commenting on Bishop Brennan's background. What do you think?

The seminary he attended is Christ the King and  is a somewhat “light weight” seminary.
Whereas it was expected those who would become bishops have a PhD, Brennan did his advanced studies in Rome where he earned a BA in Theology and an MA in “pastoral theology” (which used to be considered a light weight subjects)
My observations:

That he attended public school and was considered for bishop position is surprising.
Christ the King seminary is not known for its heavy weight thinkers.
It appears he got someone’s attention while at Christ the King seminary who was responsible for sending him to Rome for studies. Those who attend school in Rome are usually favored for higher positions in the Church. However, those who climb normally have higher degrees that what Brennan has. I would conjecture that someone higher up had their eye on him.

He was ordained a priest in Washington BEFORE Teddy MCCarrick arrived but it is significant that he was there for his ordination.
He was consecrated a bishop by Arch. Lori which means he will be influenced to some extent by his thinking.
He will likely only be here for two and one half years until which time  he is required by canon law to retire.
So why send someone, his age here?
Posted by Mary Ann Kreitzer at 9:35 PM

He's over 72, only two and a half years from submitting his mandatory retirement papers. So he's definitely an interim assignment. The question I have is how close is he to the lavender mafia? He will be deciding what "reparations" Bransfield will be called on to make. But he will also presumably be deciding on what, if any, obligation the diocese has to support him. NONE I hope. They've been abused enough already.

BAD choice. Read all about his connections to all of the Names that keep coming back up (like a bad meal).