Quo Vadis? I Thought Headlines of Pope Francis Giving Away the Bones of St. Peter was a Satire Piece from the Babylon Bee...

...but it's all too real. Quo vadis, Kephas? To Constantinople to a Church not in union with Rome that rejects the papacy. 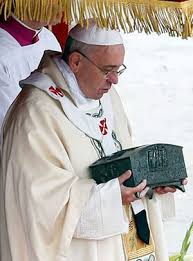 Think about it. Francis, the successor of St. Peter (If he is!), thinks so little of the papacy that he gives away precious relics of the first pope to the representatives of a Church that is in schism over the issue of papal authority.

Please tell me this is a nightmare. Pope Paul VI kept the relics in his private chapel to venerate St. Peter and perhaps to remind himself of what it means to give your life for the Church to the point of shedding your blood. LifeSiteNews reported:


The archbishop said that after the two prayed together at St. Peter’s tomb, the Pope told him he had a “gift for the Church of Constantinople.” The Pope invited the archbishop to accompany him to the Apostolic Palace. There, in the private chapel of the popes, Francis took the reliquary and gave it to Archbishop Job.

“When we entered the chapel,” the Orthodox archbishop said, “Pope Francis explained to me that Pope Paul VI wanted to keep a part of the relics of St. Peter from the Vatican Basilica in his private chapel.”

Pope Francis told him: “I no longer live in the Apostolic Palace, I never use this chapel, I never [celebrate] Holy Mass here, and we have St. Peter’s relics in the basilica itself, so it will be better if they will be kept in Constantinople.”

“This is my gift to the Church of Constantinople,” the Pope added, as he handed over the relics. “Please take this reliquary and give it to my brother Patriarch Bartholomew.”

Peter was martyred in Rome. When he was leaving Rome to avoid martyrdom Christ appeared in a vision and told Peter He was going to Rome to be martyred in his place. So what is the significance of this pope rejecting both the opportunity to pray before the relics of St. Peter and sending the remains of St. Peter away from Rome. Is this a judgment on the "holy city?" The reporting above makes it sound so cavalier, as if Pope Francis doesn't value the relics at all. In view of his past contempt for spiritual bouquets and other pious practices, one can reasonably ask whether he believes relics have any value? What does he value more: the relics or the stang presented to him at World Youth Day?

It's hard to tell what Francis believes, but whatever that is, the relics were not his to give. They are part of the patrimony of the Church. Did he consult anyone before he did it? Maybe, like Bishop Bransfield in Wheeling, he figures all the possessions of the Church are his personal property. This gives me one more reason to NEVER put a nickel in the Peter's Pence collection. The basket was empty when it was passed to me last Sunday and that's how I passed it.

What a change from the days when priests prayed at the foot of the altar about "going in unto the altar of God...who gives joy to my youth" and then approaching the altar in trepidation kissed it to venerate the relics of the saint inside. Do altars even have a relic stone any more?

This is just one more confusing and troubling sign from a pope whose m.o. is confusion and ambiguity. He speaks with a forked tongue and that is certainly not a sign given to us by Christ who said, "Let your yes mean yes and your no mean no."

Most Sacred Heart of Jesus, have mercy on us!

Read more (including the comments) at:
Pope Gives Bones of St. Peter to Schismatics (RESIST HIM to HIS FACE)
Posted by Mary Ann Kreitzer at 6:00 AM

You are right. They were not his to give away.

Like one person said, what's next? Our Lady's veil at Chartres? Will Francis give that to the Muslims for Islam to have since there's the Fatima connection?

Apparently Francis had the "idea" to give away the bones of St Peter just the night before while he was praying. So the next day he ships St Peter off to Constantinople. Normally more "discernment" is put into any action than a whim received from prayer since one could be listening to Lucifer and not Our lord.

In addition, note that Francis never gave a thought that the NEXT pope might want to have St Peter's relics in the apostolic palace.

And since Istanbul is in Turkey, and St George's Cathedral is on the same peninsula as the Haiga Sofia and since Turkey is run by the rabid Erdogan, who's to say that the bones of St Peter are safe? That Muslims would not charge into St George Cathedral, take the relics and throw them into the Bosporous Strait?

Yes, No doubt the 'stang' has pride of place

If you are interested on how they discovered the exact location of St Peter's tomb & concluded the relics were actually him, an excellent text is:

The bones of St. Peter : a first full account of the search for the Apostle's body
by John Evangelist Walsh - Garden City, N.Y. : Doubleday 1982

Among other things it describes the scene when they first found what they thought may be the actual tomb, & Ven. Pius XII sitting nearby waiting while a (very skinny) priest/archeologist squeezed into it to see what was there. Too bad there isn't a photo.