White Doves In the Most Special Places 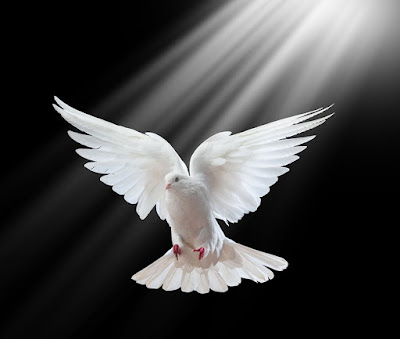 I mentioned previously on this blog that there were three things that made strong and lasting impressions on me during our pilgrimage in May to Italy.  I have written about two of them in other posts.  The first was the answer to prayer after our group prayed an emergency novena to Our Lady when our bus was completely unable to proceed to our destination.  Secondly, I have written about the awesome experience of celebrating mass in front of the famous corporal stained with the blood of Christ which may in all likelihood have been the inspiration of the Feast of Corpus Christi we celebrate each year.

The third precious event was an encounter with a pair of doves. 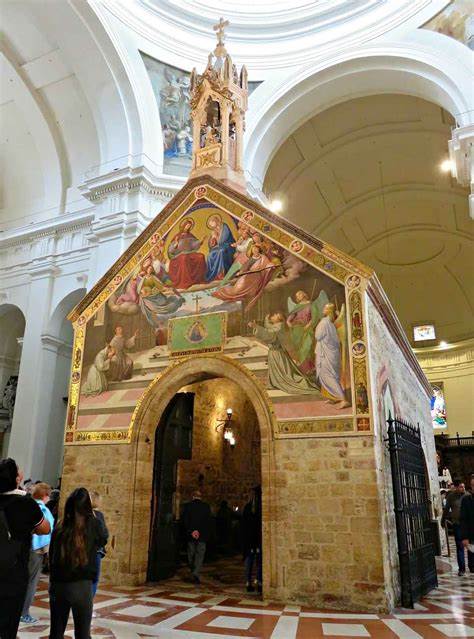 On the first day of our visit to Assisi, we were given time to visit the Cathedral of Our Lady of Angels located in the small town at the foot of the hills where St. Francis lived.
This magnificent church was built between 1569 and 1679 and encloses the 9th century little church, the Porziuncola, the most sacred place for the Franciscans.  In this little church, St. Francis came to know his mission that would lead him to renounce the world and all his riches to live in poverty among the poor and found the Order of Franciscans.


It had been given to him by Benedictine monks who had cared for it from the 9th century.  It is decorated by artists from different periods and this small building within the larger church is of course enough to bring any Catholic to their knees in awe and wonder.  I’m not saying for me it did not, but interestingly enough it was not the highlight of the visit to this magnificent church. 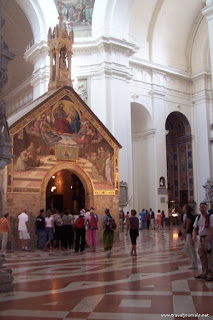 At the side of the little church is a display of some of the things which belonged to St. Francis and further off to the right is a corridor leading to the office and a covered portico that offers a path to the outside where pilgrims can still see a part of the garden where St. Francis prayed and spent time with nature.  It was here that he threw himself into the roses as a means of mortifying his flesh and subduing his temptation to abandon his way of life.  When he did this the bushes turned into dog roses without thorns.  From this time the roses in this garden known as canina assisiensis have been growing.


And from the rose garden you can enter the Rose Chapel which was originally the cell where Francis spent the night in prayer.  One might imagine THIS would be inspiration enough, but as special as it was, and as blessed as I felt to be there and see it, there was yet another site that surpassed all I had seen to this point.


In this back hallway leading to the garden is a small statue about five feet tall of St. Francis in a nook, looking like all statues do with him in a brown robe and a rope tied around his waist.  This particular statue has him holding a basket near his waist in which sat a real live white dove.  The hallway is open to the outside further down the corridor so it is easy for a small animal to get in and out as they choose to.  But the bird, I am told, sits on this statue all the time and does not leave, until it is relieved by another dove that waits nearby on a shelf at the side of the statue. 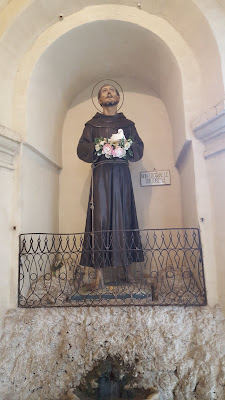 A sign has been posted on the wall beside the statue to leave the bird alone.  It is natural, I am sure for some rowdy people to think it is funny to try to frighten the bird away or to determine if in fact the bird is actually alive or a fake.  I stood in wonder at the sight of this lovely white dove sitting peacefully in the wreath, preening itself and looking about contentedly at the people who wandered down the hallway in search of the rose garden.


One might say, well, it was only a coincidence the bird was there, but Fr. Kleinmann who was with us said it had been there every year he had visited for the last fourteen years and he had never seen the statue when a dove was not there.  The pair of doves it seems take turns, one relieving the other from time to time on the statue.


On this trip we saw many breathtakingly beautiful examples of architecture and art that are manmade for the glory of God.  They sing praises to Our Creator with their perseverance of the passage of time and they are a reminder of the presence of the Church in this world to the end of time.


But the doves are not commanded or placed there by man as so many stones, nor can their presence be predicted by us because they are wild and free to do as they please.  The wonderful thing about them is that they seem most to want to please God.  St. Francis was known to have told the doves to sing praise to our Creator and it appears they continue to do this by their obedient presence in his arms here in the tucked away hall near the garden. 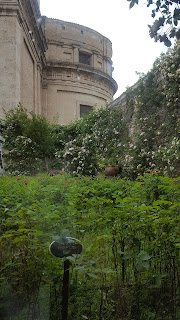 How long really has this been going on, you ask?  If you internet search doves at Our Lady of Angels Assisi, you will find they have been there “as long as anyone can remember.”


And is this phenomenon peculiar to this statue alone?  In fact it is not.  Doves are known to express this same devotion to the statue of the Blessed Mother of Fatima during processions.


A dove was present in the story of Noah and the Great Flood.  Another is present at the Baptism of our Lord.   A dove is generally shown in art as a representation of the Holy Spirit.  To see these birds in Assisi was a sight I will treasure more than anything else we saw there, because I believe there is something supernaturally special about them.


In an age where everything has to be scientifically proven to be accepted, it was amazing to witness this little spectacle and be able to soak in the joy of it without having to apologize or be concerned what the world would think of it.  Anyone other than a Catholic would try to find an explanation or the “trick” to it, but I was able to say to myself how happy I am to be in the Ark and know that in this world there are truly other worldly things.
Posted by Chriss Rainey at 12:39 PM

I saw the same thing in 2005 in Assisi. I seem to recall a nest of young doves there, and the adult bird flying off as my group approached.

I just traveled to Assissi in November. On our travels there, a tree was barren of any foliage, but was covered in white doves! It was quick, in passing, but the vision is embedded in my mind. Peace and pure beauty.....