It's Not Just Fraud; It's Treason! Three Star General Calls for "Full Disclosure!" 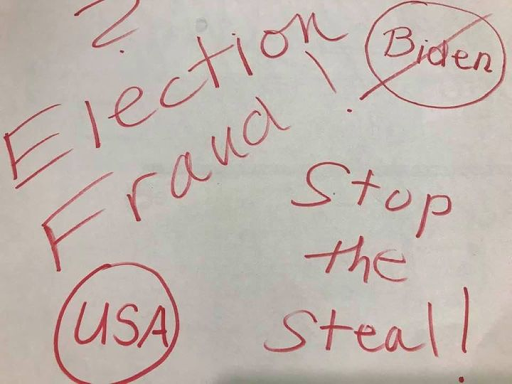 The big question that needs to be answered is:
WAS THE 2020 ELECTION LEGITIMATE OR ILLEGITIMATE?
The mainstream media continues to pretend fraud didn't happen in the 2020 election, while anyone with half a brain can see that cheating and stealing was likely epidemic.  You won't learn that from the New York Times, Washington Post, CNN, MSNBC, and the other traitors in the media who will do anything to achieve their socialistic goals. Any of us who question the result are labeled "conspiracy nuts." But was there, in fact, a conspiracy to steal the election? There are certainly plenty of flashing red lights warning that something fishy and perhaps criminal or even treasonous happened.
The 2020 election result was statistically questionable. That's an understatement. Impossible comes a lot closer to the truth. Many aberrations indicated that something wasn't right. (Check here, here, here, here) But to discover the truth you have to go to the alternative media, the organizations, researchers, analysts, etc. They are all censored by the New York Times, the Washington Post and other liberal press along with Big Tech!
Anyone who refutes the liberal narrative is censored and described by the MSM talking heads (in their echo chambers) as a "conspiracy theorist."
Today I'm beginning a long look at the treasonous activities of the Democrats and their collaborators. I'll start with a video posted Saturday night at World View Report with General Michael Flynn, three-star general Thomas McInerney, and researcher Mary Fanning. They explain how the vote was falsified and flipped.
This isn't simply election fraud, it's TREASON! See the hour-long video at the link below.
General McInerney: US Military Personnel Killed in Frankfurt CIA Server Farm Raid
It's well worth the time to listen, but if you can't spare the time, check out my bullets below. The information is shocking, horrifying, and focuses on the crisis our Republic faces from the treasonous left.
As I write this, I'm watching the Arizona Election Integrity Hearing live. Many Arizona legislators are participating. The testimony from Colonel Phil Waldron, a 30-year career military officer, about the Dominion/Smartmatic voting machines and software is compelling. He's a cyber-warfare specialist. Half of his military career was spent "in information warfare as a psychological operations officer and information operations officer, conducted computer network operations, electronic warfare, special electronic warfare, deception, counter deception and op sec." He's a credible and impressive witness. But that's the post for another day.
Let's get back to today's video featuring General Mike Flynn, General Thomas McInerny and Mary Fanning.
From General Mike Flynn:

"If we don't get this right, our country is done; it's over....We cannot allow this...We're going to straighten this out....It's going to be done legally...with American patriots... [Flynn mentions Giuliani, Lin Wood, Sidney Powell, etc.]... I think we'll find out at the end of the day that President Trump won in a landslide."

From Researcher Mary Fanning:
Keep in mind that the evidence is not being presented on this video, simply the problems that need to be vetted and the areas where evidence will come from. The fight will be in the courts with the evidence presented there.
Posted by Mary Ann Kreitzer at 5:17 PM

The problem is that the putative victim is an administration which could have and should have dealt with the dominion stuff way earlier than the election.

What is one to make of AG Barr “protecting Clinton” (see headline on Populist.Press) and of his saying that the DOJ and FBI haven’t seen any evidence of widespread election fraud...and Trump’s legal team responding that the DOJ has not conducted any semblance of an investigation to determine the existence of evidence? This is a nightmare. I hope it’s merely a ploy to thwart the perpetrators!