Another Leak in the New Church dike: The Ordination of Dom Alcuin Reid 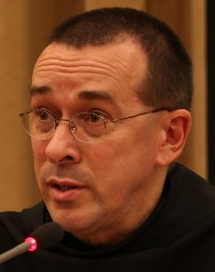 Last May, a clandestine ordination took place when an unnamed bishop conferred the priesthood on Dom Alcuin Reid, a scholar of international stature. Catholic World Report describes him on their author's page:

Dom Alcuin Reid is the founding Prior of the Monastère Saint-Benoît in the diocese of Fréjus-Toulon, France, and a liturgical scholar of international renown. His principle work, The Organic Development of the Liturgy (Ignatius Press, 2005) carries a preface by Joseph Cardinal Ratzinger.

The video below explains the reasons that Dom Reid disobeyed his bishop, Dominique Rey, in order to protect the monastery and do his duty of being able to provide daily Mass for the monks.

Rey, by all accounts, is a good man but refused to ordain the monk, presumably out of a desire to avoid conflict with Rome. But that hasn't protected the bishop from the Vatican enforcers as you can see from the OnePeter5 article I've titled The Empire Strikes Back! Not only that but Rome has also restricted the right of all the bishops to approve associations of the faithful without permission from Rome, a pretty obvious move to prevent any tradition-minded new communities from forming. All this suppression of the bishops from the man who talks incessantly about "collegiality" and "listening."

Vatican correspondent, Diane Montagna, also weighed in on the situation.

JUST IN: Bishop Dominique Rey of Fréjus-Toulon (France) has today informed all priests of the diocese via email that Rome has “requested that the diaconal and priestly ordinations planned for the end of June be postponed.” See original French email and English translation below. pic.twitter.com/ZaENdHcRvu

Actually, this gives me a lot of hope. The ordaining bishop was not approached by the monks. He approached them. Speculation about who did it is swirling as you can see from speculation on the video. It's a "senior prelate" in good standing, Cardinal Mueller perhaps? That would be ironic since he at one time said the SSPX were "in schism." I wonder if he's changed his mind. Of course, it could be another bishop, but Mueller was, in fact, in the area.

This is one more leak in the dike that Francis has attempted to erect to keep the Mass of the Ages from encroaching on his new and improved Church lite. The monks are one more community, like the SSPX, that are in an irregular situation with valid but illicit Masses. Keep your eyes on this. It will be interesting to see what comes next and how many laity end up at the monastery for daily Mass. I like to think we are returning to the devotion of the Middle Ages when the monasteries were a center of the spiritual life and assistance to the community.

Remember, "All things work together for good to those who love the Lord and serve according to His purpose." Do that and all will be well.

Posted by Mary Ann Kreitzer at 9:09 AM

Unless you can provide documentation that supports your allegations, I will be removing your comment. After reading it more closely and looking at the links, you provide nothing here but slanderous accusations. None of your links offer any proof.

On second thought and upon further reflection, I have removed your comment, Anonymous. You took a scattershot approach to attacking a number of people with scandalous accusations. If you have documentation rather than allegations from unnamed sources and questionable websites, send me the data.

But I thank you because I am changing my comment rules as a result of your comment to include that no posts with accusations not backed up by solid evidence will be posted.