Let Us Seek the Truth Like the Wise Men of Old!

Meditating on the Magi is a humbling experience. Think of the immensity of their project. It was over a thousand miles from their home in Persia to Bethlehem. As pagans, what did they know about the coming Messiah? They must have been great seekers of truth. And so they received a call from truth Himself. How else could they have the courage to even take the first step.

They saw a star and set out knowing very little about where they were going and how long it would take them to get there. What a burning desire to see the newborn King must have inflamed their hearts!

I live in Virginia and my husband and I travel periodically to Texas to visit one of our sons and his family. It's about the same length as the Magi's journey. We get in our car and mostly drive on interstates that are well maintained with many rest stops and places to take a break, get a bite, and spend the night. The people we meet along the way are generally friendly and helpful. It takes us about three days to get there since we don't drive in the dark and stop a lot to walk and stretch.

But what if we had to walk? Or even ride a horse or a donkey? How eager would we be to leave the comfort of our home even if we had servants and pack horses behind us?

T.S. Eliot wrote a magnificent poem, The Journey of the Magi that envisions the hardships the Magi faced. Here's the first stanza, but I recommend the entire poem as a source of meditation, especially today:


A cold coming we had of it,
Just the worst time of the year
For a journey, and such a long journey:
The ways deep and the weather sharp,
The very dead of winter.'
And the camels galled, sorefooted, refractory,
Lying down in the melting snow.
There were times we regretted
The summer palaces on slopes, the terraces,
And the silken girls bringing sherbet.
Then the camel men cursing and grumbling
and running away, and wanting their liquor and women,
And the night-fires going out, and the lack of shelters,
And the cities hostile and the towns unfriendly
And the villages dirty and charging high prices:
A hard time we had of it.
At the end we preferred to travel all night,
Sleeping in snatches,
With the voices singing in our ears, saying
That this was all folly.

We don't know which of the wise men is speaking but his voice could be that of anyone searching for God. He tells us they returned to their homeland changed forever with the conviction that they would do it all again:


We returned to our places, these Kingdoms,But no longer at ease here, in the old dispensation,With an alien people clutching their gods.I should be glad of another death.

How out of touch with their civilization they must have felt after that grace-filled event in Bethlehem! How they must have remembered and dreamed and relived it in their minds and thought about what it all meant. How much they must have longed to see Jesus again recognizing that "another death" would take them to their true home.

Tradition tells us that the Magi later converted to Christianity and were baptized by the Apostle Thomas; that they joined with him in spreading the Gospel. Being among the first followers of Jesus that seems more than plausible.

Will we follow the example of the Magi? Are we willing to leave our comfortable homes and surroundings, even metaphorically, to follow the Way, the Truth, and the Life?

Caspar, Melchior, and Balthazar, please intercede for us that we might be seekers of truth like you were.


My tribute to the Magi in my dining room. 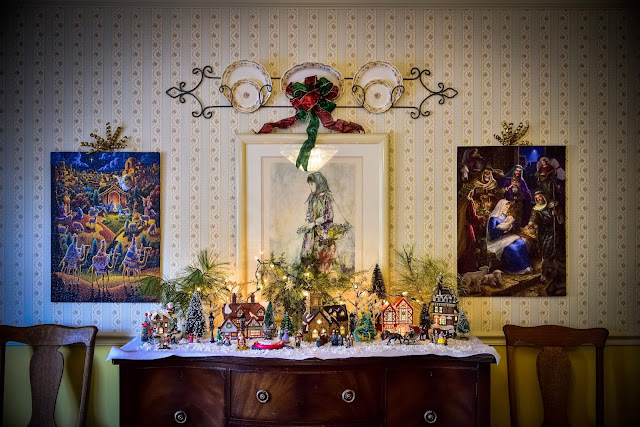