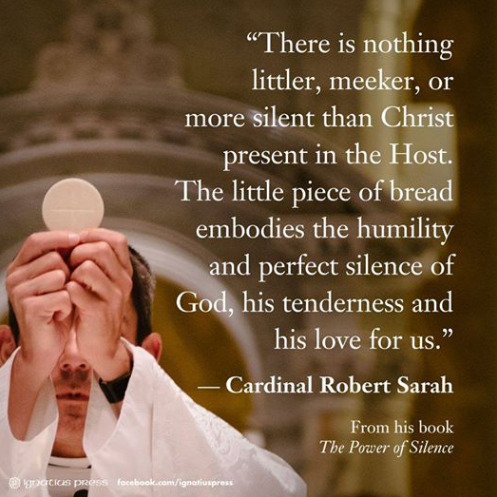 I recently read Cardinal Sarah's book, The Power of Silence. I took it with me on my annual 5-day silent retreat where it became my go-to spiritual reading between meditations on the Spiritual Exercises of St. Ignatius. What a powerful companion on the journey! Silence with the Lord nurtures rich spiritual fruit.

But there's another side to silence.

Today, I read an article about that flip side. Think of St. Thomas More and his silence about Henry's "marriage" to Ann Boleyn. In A Man for All Seasons, Cranmer accuses More of a silence that speaks treason against the king. The saint responds vigorously with the legal principle that silence implies consent. On the other hand, some legal scholars say that silence means consent only when the person involved has an obligation to speak. Since More had relinquished his role as chancellor, he had no obligation to embrace martyrdom by publicly denouncing the king's marriage. Only when circumstances forced him (the devil always demands approval for evil) did More speak.

Which brings me to the article I read this morning in which a recently ordained priest describes his experience in seminary where, he says, "Don't Ask, Don't Tell" is Still the Rule. Do I need to be explicit about the subject of silence, the elephant that lumbers along seminary corridors?

Fr. Patrick Klekas describes his seminary experience identifying two extremes: the seminary careerist and the homosexual. But I'll let him speak for himself:


There are some men who enter seminary with their minds already made up. They think discernment is no longer unnecessary (sic). The problem is, they exclude the freedom of being able to follow God’s will, even if that means (as it often does) leaving the seminary....When a man in seminary takes the Pelagian view, it narrows his ability to discern and he can become so focused on his imagined future priesthood that he forgets his present state as a discerning seminarian. The situation is not improved when a seminarian puts on clerics and enjoys instant status by those outside the seminary.
Over time, what this view can develop into is a deep rigidity that is solely focused on appearances. This is the root of clericalism and careerism.

From his discussion of the careerist, Father turns to the homosexual:


On the other extreme is the homosexual subculture. Having attended two different seminaries, I’ve met a lot of seminarians over the past seven years... In my first few years of seminary, I was hit on and attempted to be groomed on by older seminarians and priests. I know that I’m not alone in here: I’ve witnessed guys leave the seminary due to these specific issues.

Men who have deep-seated homosexual tendencies shouldn’t be allowed to enter the seminary. Popes John Paul II, Benedict XVI, and Francis have all made this perfectly clear. And yet… and yet, they still are.

To cope with this contraction (sic) [I think he meant contradiction], an unwritten rule has developed: unless there’s hard evidence of deviant homosexual behavior, it’s better not report it, because the repercussions are generally seen through the ideological lens of conservatism vs. liberalism. Accusers are themselves accused of “pastoral insensitivity.”
This “don’t ask, don’t tell” attitude thrives in a toxic mill of rumors, suspicion, and secrecy. It’s why the seminarians at Mount Angel, at least when I was there, could have the saying, “you can kiss a girl in town and get kicked out, but kiss a guy on the hill and still get ordained.” Most seminarians come to think it’s better to say nothing, for fear of being thrown out of seminary by the ideological police.

Father points out another problem, one that Bishop Fabian Bruskewitz of Lincoln attempted to address at the infamous 2002 bishops' meeting in Dallas when he made a motion to study the relationship between the homosexual abuse scandal and dissent. He could not even get a second from the "hapless bench of bishops." Here's Fr. Klekas' experience:


The majority of seminarians who act out on their same-sex attractions tend to support heterodox moral teaching. I have witnessed this in conversations at the dinner table, where seminarians will dissent from Church teaching only to confess strict orthodoxy to their professors. This process of ordaining discontented seminarians contributes to the popular notion that a rise in clerical dissent will increase the likelihood of change in the Church. As Pope Emeritus Benedict pointed out recently, scandals in the Church have their origin in the seminary.

Despite the problems that continue to plague seminary life, Fr. Klekas is optimistic. He writes that  "the majority of men I have met in seminary are good and faithful men who are striving to be authentic followers of Christ." From my own limited experience of seminary candidates serving in my parish, I can say the same. The four young men we've met over the past few years give me great hope for the future of our diocese. But that doesn't mean we should be naive. Men with same-sex attraction continue to enter the seminary whether through the deliberate complicity of superiors or because of their own dishonesty. We would do well to commit ourselves to pray every day that the Lord will send laborers to the vineyard who are men after his own heart.

Have you prayed for seminarians today?

Our Lady, Queen of the Clergy, pray for us!
Posted by Mary Ann Kreitzer at 8:31 AM

Have I prayed for seminarians today, Mary Ann?

You bet! Today and every day on my way to work (Esp for a young man named Isaac. He is from a fine Catholic family who has two sisters in religious orders!).

Thanks Kevin, I'll be praying for our diocesan seminarians at adoration tonight.