Feast of the Holy Rosary and the Victory at Lepanto 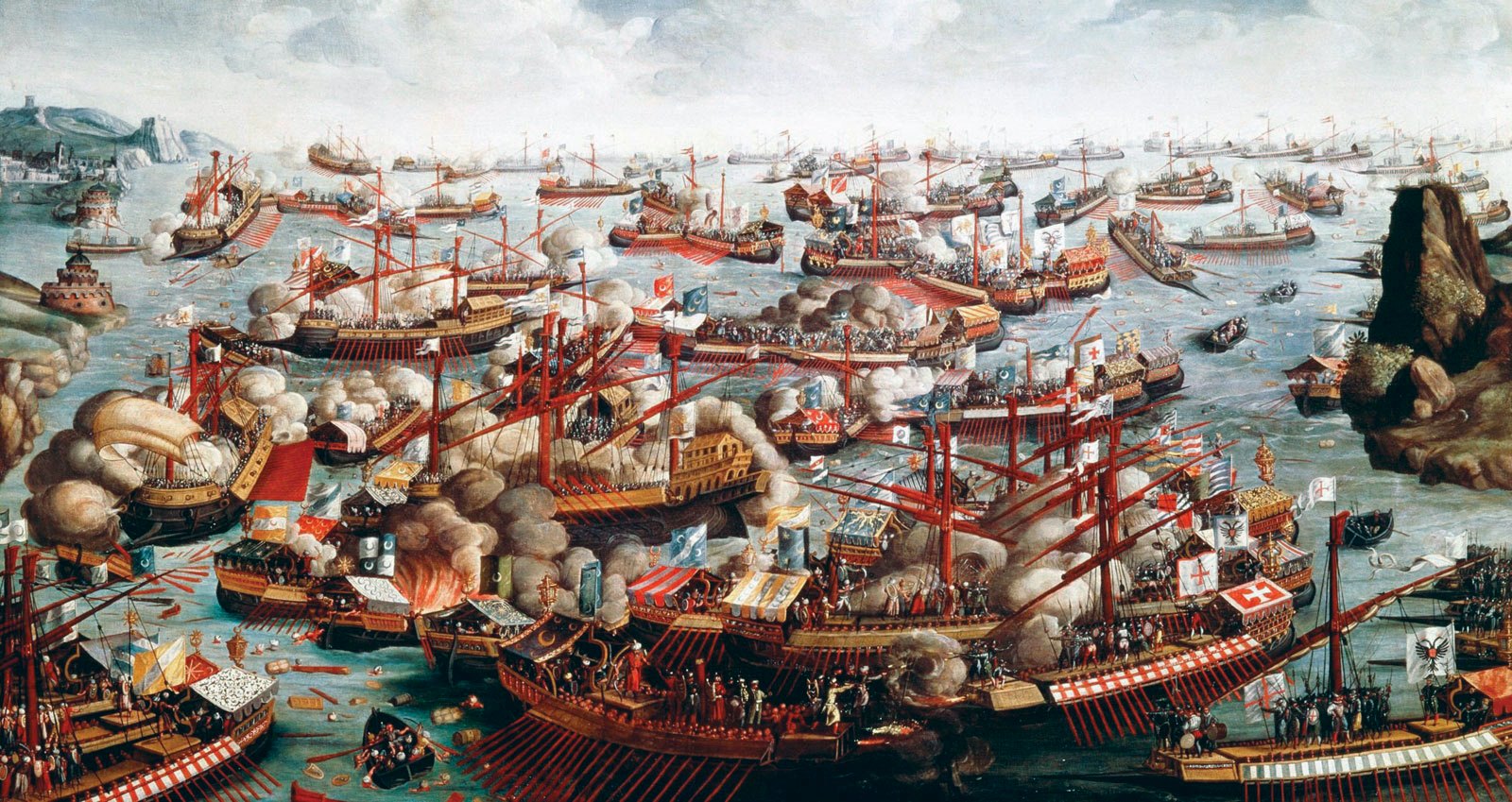 What a great day to reflect on the power of the rosary to win decisive battles like the victory at Lepanto in 1571. God raised up a crusader, Don Juan of Austria, to defeat the Islamic navy through the sign of the cross. Look closely at the sails and see the standard of Christianity, the cross, vs. the standard of Islam, the crescent. Chesterton, in his famous poem on the battle, depicts the crescent as the devilish smile on the face of Selim II as he calls on demonic spirits to give his forces the victory.
This next painting shows the miraculous vision of Pope St. Pius V when Our Lady appeared and let him know the Holy League secured the victory. 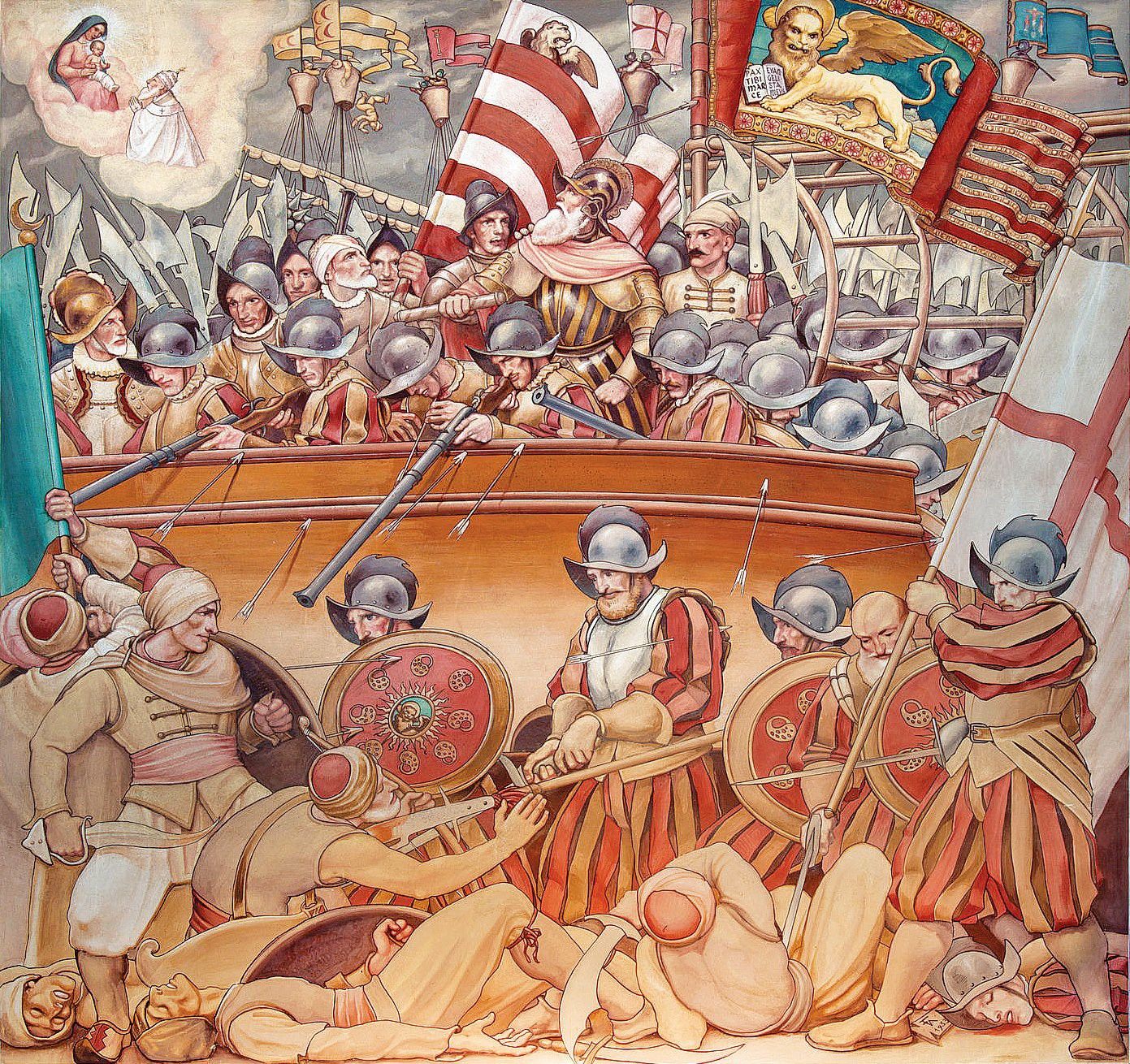 The battle goes on as fiercely as ever with the demonic forces of modernism and Islam overwhelming Christianity. But, as we know, that can never happen. What Satan means for evil, God uses for good. Many people who retain their sanity are waking from the sleep of ignorance and indifferentism. How many parents, even "progressives," see the damage gender fluidity and critical race theory are doing to their children. Love for family and protection of the innocent are powerful motivators. Most parents love their children. Most are not enabling them by encouraging them to take puberty blockers and mutilate their bodies.
The victory is the Lord's and He always uses the humble to confound the arrogant and proud. So let us pray and work in a spirit of hope and confidence knowing that God will never abandon us and is always there at fiercest point in the battle.
One piece of trivia that always thrills my heart -- Cervantes rode one of the galleys and lost a hand in the battle, but it didn't stop him from creating Don Quixote. And in fact the poem ends with a vision of both him, a gallant fighter, and Don Juan:

Cervantes on his galley sets the sword back in the sheath
(Don John of Austria rides homeward with a wreath.)
And he sees across a weary land a straggling road in Spain,
Up which a lean and foolish knight forever rides in vain,
And he smiles, but not as Sultans smile, and settles back the blade. . .

(But Don John of Austria rides home from the Crusade.)

Read Lepanto, or even better, listen to its brilliant cadence.
Revel in the Lepanto victory that saved Europe from overthrow by Islam. Revel in the glorious depiction by Chesterton. Let each of us be a crusader for truth as was St. Pius V, Don John, and all those who protected their families from violation and slavery as they rescued the sultan's Christian slaves manning his galleys.
I'll be praying my rosary today in thanksgiving for all the battles won through the intercession of Our Lady and those who love her and follow her as our 12-star general.
Hungry for more? Listen to Christopher Check describe the secret weapon at Lepanto.
And one last thing. Today is Vladimir Putin's birthday. Interesting eh? Russia has a role to play in these troubled times. I'll be praying for him and all the people of Russia and Ukraine today. Pray for a victory over modernism, globalism, one world government and one world religion. This battle represents a decisive conflict between God and Satan.
Our Lady of the Holy Rosary, pray for us.
Posted by Mary Ann Kreitzer at 11:58 AM

Excellent. . I was wondering due to the mass disorientation that seems to permeate our daily lives, if any one recently has checked on Putin’s status on Freemasonry.....our demonic enemy. I ask because I remember seeing a picture of Putin with George Bush inA Skull & Bones robe. Plus he was seen and photographed with Schwaub. Hopefully I am very wrong. P.Costin

It also turns out his deceased mother's name is Maria, for what that's worth.