Two Visions of the Future: Under Which Would You Rather Live?

Do you want in your country “parent number one, parent number two and parent number three instead of mother and father? "
Do you want schools "to impose on [y]our children, from their earliest days in school, perversions that lead to degradation and extinction?"
Do you want teachers, librarians, drag queens and Dr. Moreaus, "to drum into [innocent children's] heads the ideas that certain other genders exist along with women and men and to offer them gender reassignment surgery?" Is that what you want for your country and your children?
"The dictatorship of the Western elites targets all societies, including the citizens of Western countries themselves. This is a challenge to all. This complete renunciation of what it means to be human, the overthrow of faith and traditional values, and the suppression of freedom are coming to resemble a 'religion in reverse' – pure Satanism. Exposing false messiahs, Jesus Christ said in the Sermon on the Mount: 'By their fruits ye shall know them.' These poisonous fruits are already obvious to people...in all countries, including many people in the West.

"The world has entered a period of a fundamental, revolutionary transformation. New centers of power are emerging. They represent the majority – the majority! – of the international community. They are ready not only to declare their interests but also to protect them. They see in multipolarity an opportunity to strengthen their sovereignty, which means gaining genuine freedom, historical prospects, and the right to their own independent, creative and distinctive forms of development, to a harmonious process.

"As I have already said, we have many like-minded people in Europe and the United States, and we feel and see their support. An essentially emancipatory, anti-colonial movement against unipolar hegemony is taking shape in the most diverse countries and societies. Its power will only grow with time. It is this force that will determine our future geopolitical reality.

"Today, we are fighting for a just and free path, first of all for ourselves, for Russia, in order to leave dictate and despotism in the past. I am convinced that countries and peoples understand that a policy based on the exceptionalism of whoever it may be and the suppression of other cultures and peoples is inherently criminal, and that we must close this shameful chapter. The ongoing collapse of Western hegemony is irreversible. And I repeat: things will never be the same."

Do you want to live in a country where your children are under constant assault from the moment of conception?

Biden Promises to Legalize Abortions Up to Birth Nationwide if Democrats Keep Congress
Do you want to live in a country where minors can get puberty blockers and are given top and bottom surgeries over the opposition of parents?
Biden Administration Promotes Transgender Sex-Change Surgery, Puberty Blockers for Minors
Do you want to live in a country where schools hide their children's trans behavior in school and encourage them to lead double lives while they lie to their parents, where the government engages in open warfare against parents and violates their rights as the primary educator's of their children
Alliance Defending Freedom tells Education Department that Biden's Title IX proposals will 'endanger children'
The Biden administration's war on parents continues
Do you want to live in a country where the government attacks basic moral principles defending love of God, defense of innocent human life, family values, etc. calling such beliefs a "threat to our democracy" and "domestic terrorism?"
Biden Calls Social Conservatives a Threat to Democracy
Do you want a new world order with no national sovereignty?
Joe Biden on Creating a New World Order

You can jump on the Russia, Russia, Russia hoax train all you want, but they are one of the few nations fighting globalism and the takeover of the national sovereignty of every country on the planet.  A friend of mine has a son living in Russia who just had a baby. Russia rewards families for having babies instead of urging their murder in the womb and even after birth. They are receiving a subsidy for their family. Abortion is decreasing in Russia. You can read more here. 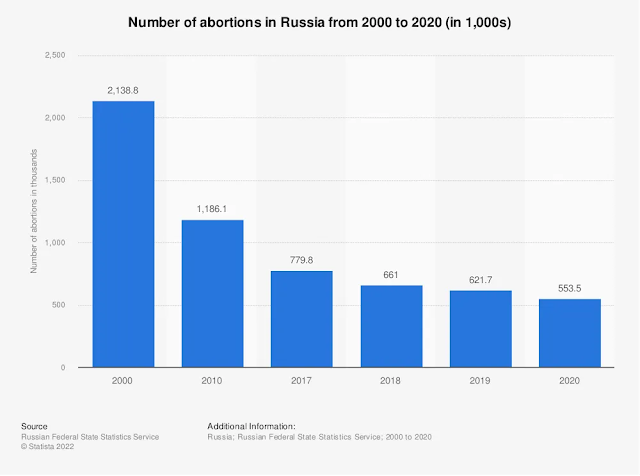 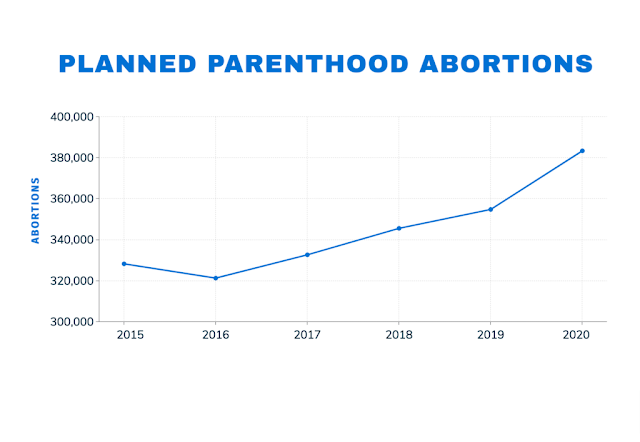 Foreigners promoting the LGBTQXYZ agenda are deported from Russia. No drag queen story hours. No doctors surgically removing the breasts from healthy little 12-year-old girls or creating fake penises by stripping skin from the forearm.
Vladimir Putin is not Russia any more than Joe Biden is America. So let's stop with the hate-on. Jesus prayed for unity at the Last Supper. I am more in unity with the policies of Russia at this point than with the demonic, murderous policies of the United States. The only one-world government I'm interested in is one world under Christ the King.
Our Lady, Queen of the World, pray for us
Posted by Mary Ann Kreitzer at 2:16 PM

Those planned Parenthood stats show a rise in abortion under most prolife president ever.

Even Hitler turned spigot of abortion off under certain conditions.

There is no former kgb. Kgb are experts at pretending to be virtuous especially posing for virtue signaling photos. They also know how to issue fake stats that correspond to their pose.

No one is nominating anyone for sainthood. But Putin right now seems the lesser of two evils.
And Christians should not be in the habit of saying, this person is beyond God's reach, it is not possible this particular person could be or do anything good, ever. That people never convert, never change, never experience growth. What is it costing anybody to just consider that possible. And isn't it better to imagine there is some oasis of Christianity and life somewhere, being preserved, rather than say all nations are against God, and determined to plunge their nations into destruction and hell. I would like Christianity and life to go on somewhere, as it once was in my homeland, good.
Our Lady of Fatima specifically mentioned Russia. Think about that. She specifically mentioned Russia for a reason.

Neither of your claims are true. Just because a politician turns abortion off for awhile does not make him good

And my dislike of trump stems from his lockdown platforming of fauci declaration of quack emergency and rolling money out to democrat! Governors to lockdown.

As for Russia, consider its partnership with xi. And see carvalho dugin debate.

I have been a long-time financial supporter of the amazing work being done in Russia by the Mary Mother of God Mission Society (vladmission.org) and I'm far more optimistic about the future of Christianity in Russia than I am about its future in the U.S. For over 70 years those ordinary people were under the heel of atheist dictators who did everything to destroy their memory of God but that culture is slowly coming back to life.

I suppose you've never been to Russia. Otherwise, you'd see things for what they are - that the FSB Church (and it's tobacco oligarch patriarch) is just as bad as the Lavender Mafia in charge of Catholic Church today. Churches are built every year in Russia - paradoxically, attendance of churches (low enough already) never changes.

I think rohrbachs is being picked on. His statement about Hitler does not equate with approval of him as a person, he is simply making the point that bad people can sometimes do good things, even though their actions might not be for the right reasons. Putin may be saying all the right things to convince people of his goodness and superiority to the west, all the while having ulterior motives. Russia may be the tool that the BVM uses to convert the world, but She may also use it as a means of destruction of the modern world.There is no lesser of two evils. Evil is evil and we cannot support it. I never trusted the sudden change in Trump from jet setter to conservative hero. I think Trump has shown his true colors in participating with the whole operation warp speed plan as well as allowing the overthrow of the former USA.