Condemn the Obama Administration's Promotion of Human Trafficking of Children 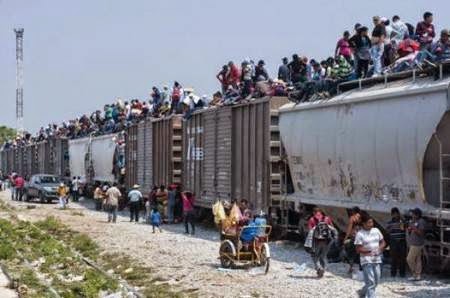 It is unbelievable that anyone can justify the human trafficking of the Obama administration using children as pawns to overwhelm our system and increase the government bureaucracy. CNS News has a very disturbing story that includes this:


Sen. Dick Durbin (D-Ill.) told the committee that he'd just received a report from an immigration advocacy group at the University of Chicago Law School describing the ordeal of two unaccompanied children:

"When they initially arrived in the United States, they were very quiet and they didn't open up. They were clearly victims of trauma. After two months of care and custody of these 3- and 6-year-old children by HHS, Emily revealed that both children had been raped by members of a local drug cartel.

"I think about those children when I think about this debate. Are they the exception? God, I pray they are. But I'm afraid there are many more with similar stories."

Three and six years old! Those are the ages of two of my little granddaughters. What mother in her right mind would let those little ones travel thousands of miles alone with a bunch of barbarian coyotes? It is time to close the borders instead of letting people think there's a magic land in the north where money grows on trees and the roads are paved with gold.

Obama and his administration are guilty of the trafficking of these children, some of whom are dying on the trip like 15-year-old Gilberto Ramos. And then there are the reports of children's bodies washing up on the banks of the Rio Grande.

And why are we not securing the borders? It's all part of the community organizing strategy to overwhelm the system. Read about it here. Obama promised to transform America and he's keeping that promise in spades. What his supporters didn't realize is that he wanted the U.S. to collapse so he could remake us into the latest socialist, government-run country where the people are slaves of the state. Is that what you want for your children and grandchildren?
Posted by Mary Ann Kreitzer at 12:24 PM

The idea that our bishops under the guise of charity may have partnered in this abomination for years and taken lots of money from Uncle Pervert to do it, really infuriates me.

I'm sorry, I missed the part about how Obama is responsible for these children being trafficked. Because he is the President of a country that has more opportunities than a neighboring country? Perhaps pressure needs to be placed where it is deserved, but that is too difficult because the real issues are the lack of real governance and policing in districts across Mexico because of the drug cartel problems that sweep the country. Or maybe it is because the issues of trafficking in children, of and itself, is never addressed as an issue that needs to be brought to the attention at local, national, and international levels rather than sweeping it under the uber domestic-centric, xenophobic tinged policies that underline the "closing our border" rhetoric.

I guess you are missing "the part", Anita. You can read about the government contract advertised last January for "escorts" for unaccompanied illegal children.
http://news.investors.com/ibd-editorials/062514-706233-texas-border-immigration-wave-orchestrated-by-administration.htm

You can call those of us who oppose Obama's strategy of destruciton xenophobes or any other word you can imagine, but it doesn't change the facts. The children are just pawns in the community organizer's handbook.