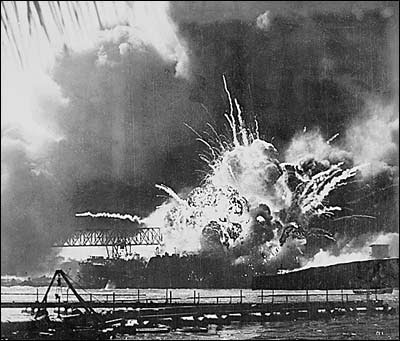 Before we leave behind Memorial Day, I want to share memories from my dad who was a Pearl Harbor survivor. (Thank God, or I wouldn't be here!) Almost 2500 hundred died in the attack and about 1100 were wounded. My dad lost a number of classmates from the Naval Academy that day.

He didn't talk much about the war, but later after he retired he was interviewed by a Baltimore paper and shared some of his memories as did two other servicemen there that day:


The day dawned a subtropical red, then a brilliant gold over the U.S. Pacific fleet nestled in Pearl Harbor in the quiet of that Sunday morning.

It was a perfect time to sleep. Or go to breakfast. Or church.

People everywhere were talking war. Nobody was certain where or when. Juke boxes were playing “Chattanooga Choo-Choo” and “I Don't Want to Set the World on Fire.” Christmas lists were being prepared, Dick Tracy was chasing the Mole, eggs were selling at 39 cents a dozen back on the mainland and a Baltimore newspaper editorial contained the soothing words that "Our position in the Pacific has never been stronger than it is now.” The Japanese Task Force, approaching Pearl Harbor from almost due north, kept tuned to a football game being broadcast in Honolulu in those last hours of peace. By the very existence of that broadcast, the Japanese commanders knew they continued to hold the advantage of secrecy, the element of surprise. At the Army Opana radar station on northern Oahu, meanwhile, Pvts. Joseph Lockard and George Elliot were waiting for a truck to pick them up for breakfast when a blob of blips burst upon the screen. They apparently were the first people to notice the blips. They plotted their movement and attempted to get a Fort Shafter information–center spotter on a direct telephone line. But everyone in that office had gone to breakfast.

Read the rest here.
Posted by Mary Ann Kreitzer at 8:14 AM

From California, I have a cousin, Vince, who lives in another state, who was about eight or nine at that time. His family was stationed at Pearl Harbor in naval housing. His mother, his brother Joe and he had just gotten back from Mass when Vince heard a plane flying in over the avenue outside, which I think was called Arizona, too. He rushed out, made eye contact with the pilot, who had on googles, before his brother came out and got him to take him inside. The plane went on to bomb the harbor. None of his family were injured, including the one in the navy.

Years later Joe carried my grandmother and I out of a flood. He is now deceased. Decades later a nun offered me a choice of holy cards at a St. Joseph's Day Feast. I took one and read it a few days later. It was a prayer with a promise that those who asked for the intercession of St. Joseph would be protected from death from battles, fire and drowning. I have no doubt that my cousin Joe had said that prayer many times. The Lord works in mysteries ways His wonders to perform.

May the souls of all the faithful departed, through the mercy of God, rest in peace.