How Are You Honoring the Feast of the Visitation?

My husband and I are off with seven grandchildren to pray for our president and our country. We will make a visitation to the town of Front Royal where a small group of pro-abortion liberal Democrats meet every Wednesday with their meme and slogan signs attacking Donald Trump and calling for his impeachment on "trumped up" charges that he consorted with Russia. They wave their flags and claim to support the Constitution while they work to destroy our Constitutional government.

We will be on the opposite side of the road with our rosaries praying for our president and our country.

You don't have to be a Trump enthusiast to recognize that he is our president and deserves our respect and prayer support. If you're reading this I hope you will join us virtually by praying the rosary, or at least a decade, for the president and his administration many of whom are solid pro-lifers something we rarely see in an administration, Democrat or Republican. Especially pray for our poor, divided country.

Our Lady of the Americas, pray for us and for the conversion of those who support the murder of the innocent.

Pictures to follow later this afternoon! And here they are.

The park bench brigade have been out for the past several months countering the liberal "hate-Trump" crowd who carry signs that malign and slander the president. Despite no proof of the Russians hacking the election the liberals carry signs claiming he's a pawn of Putin. Since we came last week, they now carry new signs calling for prayer. There were none last week. Looks like a response to those who really do pray.

Our Lady of Guadalupe would be happy to have people be able to stay and make a living and raise their families in their own countries rather than violate the laws of other countries by illegal invasion. Pray for the government of Mexico that they will clean up the corruption and the drug cartels and make their country a place where families can thrive and be happy celebrating their faith and customs. No people should have to flee their own country abandoning their families in order to enjoy basic human rights. 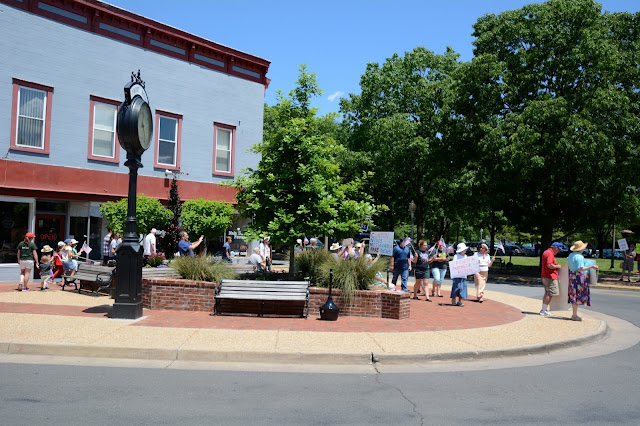 We had about thirty-five with us praying the rosary. Since there were a number of children it was clear where the future lies. I used the ride over for a civics lesson with three of my older grandchildren talking about how fortunate we are to have the right to free speech unlike Communist countries where free speech is persecuted. I told the children about Tiananmen Square and how the Chinese brought in tanks against the students. Then I told them about Hungary in the 1950s when the people tried to throw off Communism. I also told them about the courageous Cardinal Mindszenty who ended up a virtual prisoner in the American Embassy from 1956 to 1971. 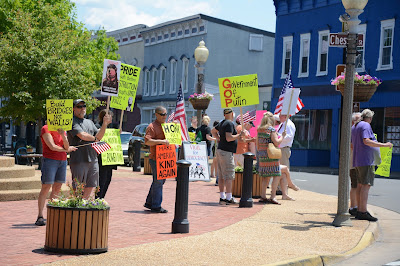 The liberals on the other side of the street were mostly oldies from the hippy generation. Their message was anti-Trump with signs like "Lock Him Up" and others spouting unproven accusations and slurs against Republicans like "Government Of Putin." They had no children. Last week they had a baby carriage with a dog in it. We had the baby carriage with two little ones riding. It gave us a good laugh. They care more about pets than people. 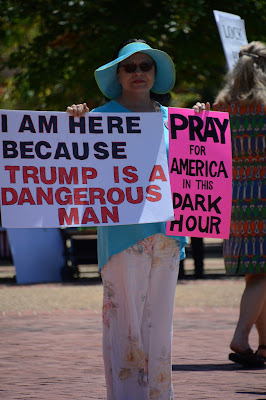 This woman last week told us she was a teacher. I asked if she was against abortion. She started talking about all the abused children and ended up saying it was better for them to be killed before birth. I wish I had thought to ask her what she recommends for all the children who are still being abused -- euthanasia? -- forced assisted suicide? The fact is that since abortion was legalized, abuse has skyrocketed. Now isn't that a surprise? If you can kill a baby at any time during pregnancy, what's the big deal about abusing the child after birth?

Frankly I think these liberals are the ones who are dangerous. Liberals love abortion and censorship; many have no problem with using violence against those with whom they disagree as anti-Trump riots and  college campus anti-conservative riots show. They want to gag everyone who disagrees with them. 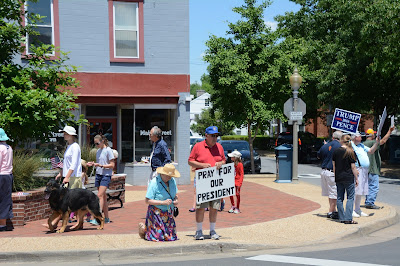 I decided to spend one decade on my knees on the pebbly sidewalk in reparation for the pro-abortion liberals across the street and for their conversion.

Somehow I don't think anyone who champions the murder of the innocent will make it into heaven without conversion, since it's one of the sins that cries to God for vengeance. Have mercy on them, O Lord. "Father, forgive them; they don't know what they're doing." 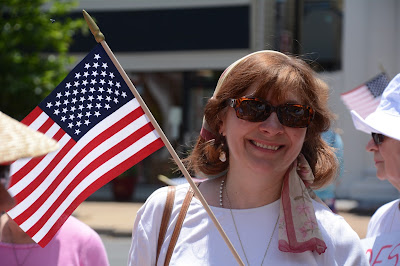 And finally, our fearless leader Jane who organized the Catholic patriot brigade to come out and respond to liberalism's errors. Thanks, Jane. And a big thank you to Mary Fran who provided the great photos! We'll be there again next Wednesday from noon to 1:00 p.m. at the clock corner opposite the gazebo. Come join us for prayer and patriotism.
Posted by Mary Ann Kreitzer at 11:18 AM

Labels: Feast of the Visitation, organized anti-Trump attacks, Pray for our country, pray for the president

Thanks. This is very well done. Mary Fran

This comment is not relevant to this post but it is relevant to a previous post about Belgian "Brothers". To honour these so called brothers as Catholic or having anything to do with the Holy Catholic Church is an insult to the Blessed Trinity. Beware.