What are these 2 silly women doing? 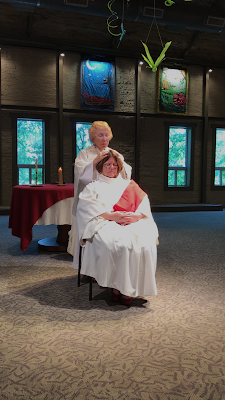 What are these 2 silly women doing?

Fortunately Nilsson has the answer for us. Sing it, Harry!

I'm ashamed to say that Bridget Meehan is from the Arlington Diocese. She used to be the DRE at Fort Myer and regularly showed up at all the dissent talks at St. Anthony's in Falls Church when Fr. Tuck Grinnell (a community organizer and founder of VOICE) was pastor. She was also an activist in the dissent group Call to Action and attended our trial after some friends and I were arrested for protesting Call to Action's meeting at Christ the Redeemer in Sterling. She definitely qualifies as a "silly woman." And she seems to be getting sillier as she ages. So sad.

Dear Sisters in Les Femmes,
Like you, I am following my conscience by living Gospel equality now as a woman priest.
May we always treat with another in our words and deeds with compassion and kindness, as Jesus commands us to love one another.
If you would like more information, visit my blog http://bridgetmarys.blogspot.com/,
www.arcwp.org
I will pray for blessings on you and I ask for your prayers.
Bridget Mary Meehan ARCWP

No, you are not "living Gospel equality...as a woman priest." You are playing dress-up like many of us did as children. As for your conscience, I have first hand experience of it from the days when you and other Call to Action members tried to organize in our diocese by using unfaithful priests and their parishes to advocate for and spread dissent to Holy Mother Church. Getting you expelled from our parishes was one of the early victories of Les Femmes.

Your malformed conscience allows you to be the moral authority over life and death including the murder of the unborn. Since I don't believe you are a stupid, uneducated woman I believe you must know what the Church teaches about conscience. If you don't here's a link to Thomas Aquinas on conscience. http://www.newadvent.org/summa/1079.htm#article13

You clearly have not formed your conscience in accordance with the mind of the Church, but according to your own opinions and will -- making yourself a rebel who tells God, "I will not serve" judging that your opinions take precedence over the voice of the Holy Spirit speaking through the authority of the Catholic Church.

Readers be warned. Bridget stays in the Church because no one would care about her and her opinions if she left. Being a dissenting rebel gets her and her rebel sisters the attention they crave. Please pray for her and the other silly women who think they can be priests in the Catholic Church. I also recommend Ungodly Rage by Donna Steichen for those who want to understand the history of the raging feminists in the Church.

Bridget Meehan, read and digest the above wise words before it is too late. I will pray that the Bleesed Mother and the Holy Spirit both knock some sense into your arrogant, fool head. God forgive you your devilment.

Bridget Mary Meehan. YOU are NOT a PRIEST. You are a deranged apostate who has excommunicated yourself from the Church. You have been lied to, deceived and now you seek to deceive others.