Learn About Fatima and Our Lady's Call to Conversion!

Why is Fatima so crucial? After all, Catholics are not required to believe in apparitions; they aren't part of the deposit of the faith that all of us affirm in the Creed.

Nevertheless, Fatima represents an urgent message for the world confirmed by a massive miracle of the sun seen by over 70,000 people. Some weren't even at the site, but saw the dancing sun from miles away. Not only that, but the miracle was prophesied months before it happened and many who came to scoff, including atheists, were converted on the spot.

Other apparitions are associated with miracles. Many confirmed miraculous healings occur at Lourdes, for example. But the miracle of the sun at Fatima is unique in the history of the Church. It was publicly announced beforehand as a message so that people might believe.The miracle set Our Lady's call there to penance in reparation for sin in bold relief. Listening to and obeying her message is crucial if we really desire peace in our world.


If you haven't studied Fatima, I urge you to make it a priority in these months before the 100th anniversary of the dancing sun in October. The best book with which to begin, in my opinion, is historian William Thomas Walsh's Our Lady of Fatima, published originally in 1947. It is heavily based on Lucia's memoirs which at the time had not been published. Walsh also interviewed many family members and friends of the little seers and other witnesses to the miracle of the sun. His book was among the first in English and promoted the Fatima message among millions of Americans. He says in the preface that "The book is not 'fictionized,'" but it reads like an adventure story.

The impact on Professor Walsh of his visit to Portugal was profound. He came to believe that "The future of our civilization, our liberties, our very existence may depend upon the acceptance of her commands." And the messages had a profound impact on his own life as described by Rev. William C. McGrath who wrote the Foreward to Our Lady of Fatima:


Dr. Walsh's tremendous achievement was uppermost in my mind the day we brought the Pilgrim Virgin statue to the room in St. Agnes Hospiatl,White Plans, N.Y., where the great Apostle of Fatima lay dying. We spoke of the reception accorded his book and its important bearing upon the very survival of America. Knowing him as we did, we spared him the embarrassment of referring to something that for him was now of even greater import, the exemplary manner in which he himself had lived the message of Fatima. 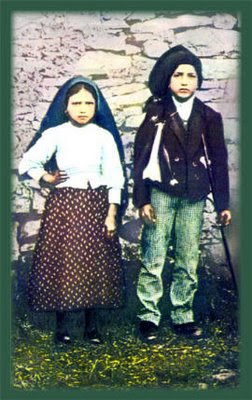 As he spoke to us, quietly and cheerfully, his gaze steadily fixed upon the incomparably beautiful Pilgrim Virgin that had come to him this day from the shrine of Fatima itself, we were impressed as rarely in our lives before with the radiant peacefulness of his expression, a peace that was truly not of this world. After all, we told ourselves, it was not hard to understand. It brought suddenly and arrestingly to our minds the promise of Mary at Fatima to those who would be faithful to her requests that she would assist them at the hour of death "with all the graces necessary for salvation."

After you finish Walsh's book on Fatima, read Lucia's Memoir, Fatima in Lucia's Own Words.  Her descriptions of her little cousins are poignant and reveal clearly the heights of holiness these babes reached in just a few short months after Mary appeared to them. Looking at the state of our world today, Mary's warnings should ring the tocsin loudly urging us to action. Let us all try to imitate these children whose sacrifices were truly inspiring!

St. Francisco and St. Jacinta, pray for us.
Posted by Mary Ann Kreitzer at 10:36 AM

https://www.taxexemptworld.com/organization.asp?tn=2316541
I don't know if the above link will come across as a hot spot or not, but anyone interested could copy and paste to a browser. It is a link to information about Frank Spicer. My husband and I signed up and paid in full for a pilgrimage to Fatima with a group of people from our parish earlier this year. Information was provided to us by the group leader, Mr. Spicer, which included "suggested reading material." The list contained some titles and a couple of authors I had come to see as questionable from the reading I had already done on my own. When I queried Mr. Spicer about his choice of literature and his insistence that ALL in the group would be REQUIRED TO listen to ALL daily lectures, his only response after a 24 hr. silence was to say our money was being refunded in full because he and his other leaders felt this was not the pilgrimage for us. Period. No other explanation.

While we had been truly looking forward to the trip, and traveling with our friends, we were stunned at this point to be literally thrown out of a group simply because I asked a few questions. It was after all regarding what he referred to as FAQ, so I didn't think it would be out of the ordinary to ask a few of my own not covered in his list.

This whole affair had the affect of labeling my husband and me as "trouble makers" among those who did go and set me on a path to figure out WHAT IS GOING ON HERE? that you throw people out of a pilgrimage who are sincerely wanting to go?

I agree with you Mary Ann, though I have not read this book, that it is more than likely a good source simply because the date it was published is BEFORE 1960. Up to that time, there was no "controversy" when it comes to Fatima. But people should be aware that AFTER that date things have gotten very very squirrely. Post 1960 literature on the subject follows two distinct paths. Sides have been taken and not surprisingly, people have sorted themselves to be on one or the other.

What I find interesting is that there are people who initially took the Vatican side have changed their minds. One author like this is Antonio Socci, who for a long time believed every word out of the Vatican, but after his own research to prove himself right, he changed his mind and has taken the side of those who believe there is a "Vatican Party Line" on this subject to protect the lies that have been told.

Lies? What lies? The cover-up and discrediting of Lucia herself to stop the public curiosity over the words of our Blessed Mother who warned of a terrible apostasy in the Church and a subsequent chastisement of the world as a result. Today, the Vatican is saying, "Move along people, nothing to see here. Say your Rosary and trust us." There is much evidence to the contrary if you just keep digging. I have not finished it, but I am currently reading The Devil's Final Battle, edited and compiled by Fr. Paul Kramer. Another good source of post 1960 info is A Catechism on Fatima by John Salza.

None of what is written prior to 1960 should be ignored. Each of us should continue to embrace all we were told by the Blessed Mother. But we should be very aware of the fact that communist infiltration at the upper levels of the Church has prevented us from knowing what should have been revealed to the world in 1960 as She requested. And furthermore there is a concerted effort by the Vatican to continue spreading the "party line" on this story to prevent people from discovering and understanding the truth.

The title of Antonio Socci's book on the subject is The Fourth Secret.

The children and others who have never been inductedare still being gven the scapular in our parish, St. Veronica in Chantilly. If you are not being offered this then you need to make your desires known to your pastor.