A Letter to God -- "Help me, Lord, during these very dark days." 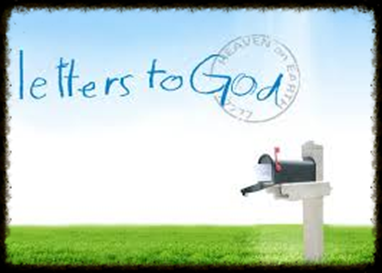 A priest friend sent me a letter to God this morning written by a self-described "lover of God begging for healing." That is something we certainly need so I want to share it. [See below.] I thought her comment about the "glitter and gold, the luxurious cars and mansions" points to a major problem in the episcopacy so I hotlinked to a CNN article about diocesan mansions. How many people in the pew, the sons and daughters of these spiritual "fathers," live like that?

The Bible tells us that "love of money is the root of all evils" and there is plenty of evidence in the episcopacy proving some bishops are "material" boys. I thought of that yesterday on the feast of Pope St. Pius X, the son of peasants, who once said he was born poor, lived poor, and would die poor. That is certainly not the lifestyle of many of our bishops, like Bishop Bransfield of Wheeling-Charleston. He could be described as one of our own "bishops of bling" here in the U.S. He scandalized many of the flock when he arrived in 2004 (including several of my husband's siblings who live in the diocese) with his "renovations" to the bishop's house. Here's what I wrote about him in 2012 when he was named in an abuse trial:


Bishop Bransfield had a reputation when he was rector of the National Shrine of the Immaculate Conception for throwing lavish parties. When he moved to Wheeling in 2004 his first order of business was a million dollar plus renovation of the bishop's house, a Victorian mansion, which included a number of luxury appointments, e.g., an expensive wine refrigeration unit and a large plasma television. In 2010 after the death of Robert Byrd, long-time liberal and pro-abortion senator from West Virginia, the bishop issued a near canonization of the man in eulogy which drew the ire of many pro-life groups. So from the git-go Bishop Bransfield has been a controversial figure.

With regard to the Philadelphia trial, Bransfield's name came up in the testimony of an abuse victim describing his relationship with Fr. Stanley Gana, a classmate and friend of Bransfield. The witness described Bransfield pulling up at the Gana family farm in a car full of "fair-haired boys" and Gana telling him that Bransfield was having sex with the boy in the front seat.

Bransfield issued a strong denial. But what I found particularly interesting about the bishop's denial was the statement that he didn't own a farm in Scranton:

I understand that I am a public figure and therefore subject to public criticism. The      nature of these statements and the manner in which they were released however go way beyond any sense of fairness and propriety. This case has gone on for seven years or more and simple facts like whether I own, or owned, a farm in the Scranton area were easily determinable. Contrary to the statements, I do not own, and never owned a farm in the Scranton area, upstate New York, or anywhere else for that matter.

All the articles I read said the farm was owned by Fr. Gana's family, not by Bishop Bransfield. So why would the bishop say that? Can anyone doubt that the bishop's statement was examined under a microscope and double checked by diocesan lawyers? Frankly, I find this troubling because it seems like a deliberate attempt to blow smoke, proving false an accusation that was never made.

Another troubling aspect of the case was the diocese's attempt to block Msgr. Kevin Quirk who was a judge in the canonical trial of of Fr. Brennan from testifying as a material witness in the Philly trial. However, a West Virginia judge signed a subpoena ordering the priest to appear as a material witness and Msgr. Quirk will testify. This is not over by a long shot.

Again, let us pray for the truth to come out. Despite the posturing of many bishops since the sex abuse scandals, the fact remains that two thirds of them covered up for the priests committing the crimes, most of whom were homosexuals raping and molesting young boys. Since then, dioceses have used safe touch programs, some of which are downright evil, to deflect criticism from themselves and transfer it to parents, teachers, and other innocent laity who had nothing to do with the scandals.

Let us pray for all the bishops that they will love poverty and ask, like St. Ignatius urges in the Spiritual Exercises, to be given poverty of spirit and even material poverty if it is God's will. And now, here is the letter.

How horribly painful these days have been. And what makes the pain so much more intense is that I cannot see a resolution, that day when I can say, “All is well” once again.

Lord, I have learned two things that I have been lazy about learning and accepting:


1. Who I am as a person of faith. So often rather than questioning, I have been naively accepting, especially of the hierarchy. It was always easy and painless that way. I have delegated my faith to the proclamations of those sitting on thrones of authority rather than to dig in and study for myself. Yet all the while You have been speaking to me but I didn’t exert the effort and energy to pay attention.

2. Who You are as my Lord and God. I depended on the hierarchy to teach and describe You to me and all the while they were living lives that ran contrary to what You expected of them and of me. So many of them did not practice what they preached. I should have known when I saw the glitter and gold, the luxurious cars and mansions, the restaurants at which they dined and the company they kept. It was so easy to “mind my own business” and look the other way.

Lord, I have to grow beyond my anger and bitterness at the corruption and lies and hypocrisy and cover ups, and most especially, the severe pain and injury done to the trusting, innocent lambs.

Help me, Lord, during these very dark days to find comfort in Your voice, through my prayer, Your holy words in Scripture and as I reach out to help the least in Your Kingdom.

I pray that You raise up true shepherds motivated by:

Love rather than lust,

Humility rather than arrogance and false pride,

Compassion rather than self-absorption,

True faith rather than self-righteous power,

Genuineness rather than hypocrisy

and who have You as their True Love above all else. Amen


From a Lover of God begging for healing for herself and His people....

Posted by Mary Ann Kreitzer at 7:56 AM

Thank you for the phrase "blowing smoke". It perfectly captures the safe touch misdirection as well.

What about "Bransfields Boys" when he was rector of the Shrine?