Reflections on The Everlasting Man 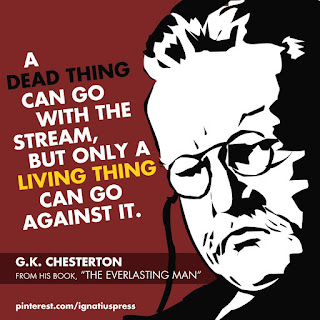 I have been enjoying a re-read of The Everlasting Man by G.K. Chesterton and it has amazed me how much went over my head the first time I plowed through this book.  Maybe that’s the problem.
Chesterton refuses to be plowed.  Unless you go at it slow enough to sink the blade of your full attention into each line, phrase, and paragraph, your time will likely be spent for naught.

I think this is why so few have read or agree to attempt to tackle his work.  Racing through his chapters thinking you can gloss over the long explanations assuring yourself they are just “so much wordiness” will get you to the end, but once you are there, you will very likely say, “So, what was the meaning of all that, anyhow?”
I think of Chesterton as I do dense rich dessert---double chocolate cheesecake, for instance.  Small bites, slow and easy, savoring every one is the only course to take.  In fact, I would advise all readers to read a chapter or even a half a chapter at a time and let it simmer in your brain for a day or two before moving on to the next one.  You will be amazed how much you can enjoy thinking about the wonderful concepts invented by this great literary genius.
Part of the reason I missed “the meaning” the first time is because I had no knowledge of some of the things he refers to casually, assuming all readers know what he’s talking about.  This time, having a better personal education of ancient mythology and philosophies, I finally “get it.”  The Everlasting Man was written to rebut a work done by H.G. Wells, who had written his own viewpoint of history and how different religions fit into it.  Chesterton makes the point in his Preparatory Note prior to Chapter One, that this is not a work of Catholic apologetics.  He says rather,
“…….this study is not specially concerned with the differences between a Catholic and a Protestant.  Much of it is devoted to many sorts of Pagans rather than any sort of Christians; and its thesis is that those who say that Christ stands side by side with similar myths, and his religion side by side with similar religions, are only repeating a very stale formula contradicted by a very striking fact.”
Chesterton hopes to convince the reader that the idea of comparing Christianity to other “world religions” and philosophies in the form of “a study of comparative religion” is bogus from the start because he rightly says “Christianity is unique” and therefore cannot be compared to any other form of belief or worship.
Why not?
“Right in the middle of all these things stands up an enormous exception.  It is quite unlike anything else.  It is a thing final like the trump of doom, though it is also a piece of good news; or news that seems too good to be true.  It is nothing less that the loud assertion that this mysterious maker of the world has visited his world in person.” 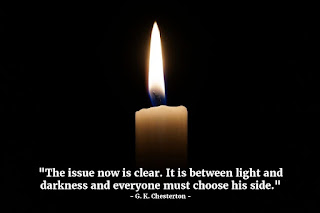 He continues his conclusion by saying,
“What puzzles the world, and its wise philosophers and fanciful pagan poets, about the priests and people of the Catholic Church is that they still behave as if they were messengers.  A messenger does not dream about what his message might be, or argue about what it probably would be; he delivers it as it is.  It is not a theory or a fancy but a fact.”
And, probably one of my favorite statements is the following:
“All that is condemned in Catholic tradition, authority, and dogmatism and the refusal to retract and modify, are but the natural human attributes of a man with a message relating to a fact.”
Chesterton believed,
“The religion of the world, in its right proportions, is not divided into fine shades of mysticism or more or less rational forms of mythology.  It is divided by the line between the men who are bringing that message and the men who have not yet heard it, or cannot yet believe it.”


One of my favorite parts of this book is Chesterton’s assessment of the man in the cave and how he can’t possibly have “evolved” from apes.  And also memorable and endearing is his description of Christmas, but then I’d be spoiling the opportunity to share that with you during the upcoming Advent.   For now, you’ll have to wait.  And wonder. 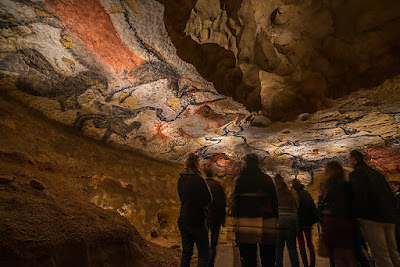 Wonder is the right word. Chesterton had the heart of a child who never lost his sense of wonder and adventure. That's why I love his novels so much. They are a romp like a schoolboy with a makeshift sword fighting dragons wherever he finds them. Think I will re-read the everlasting man. I love his lampooning of the secularists "strong man" of the tribe.