White Guilt, by Shelby Steele carries a message so true and so painful for the liberal left they would no doubt prefer that it is never mentioned.  Steele was a recent guest on Mark Levin’s Sunday night program on Fox News.  He was interviewed for a full hour at the end of which I was intrigued enough to get his book and read it.

In a word, it is a stunning revelation of how the left has divided this country and why their tactics have nearly replaced historical theological morality known for the last two thousand years with what can be labeled, “social morality.”


Steele submits the idea that because of slavery and white America’s acknowledgment of that wrong, they have lost all moral authority to tell anyone anything about anything anytime, anywhere.  It is instead their duty to apologize now forever and ever and the obligation of black America and by association as similar victims, women, sodomites, and all various assortments of brown skinned people must abandon personal responsibility to perpetuate their victimhood and oppression and strife and poverty.


In doing so, each side fans the lifeblood into the progressive Marxist tinged mantra that the Democrat party needs to maintain power and attract followers.


Steele’s parents were believers of Martin Luther King’s philosophy of non-violence, but their son, Shelby, graduated from college the same weekend that Robert Kennedy was shot and his idea of justice became that of the Black Panthers, militant and sometimes violent. 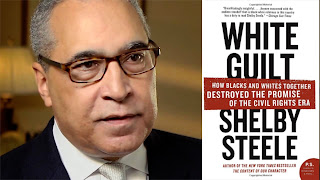 In his book, Steele drives home the point that today’s movement has made it almost a religion to renounce all discrimination by disassociation with anything but full acceptance of all behavior.  He now considers himself to be a conservative man.  Not a Republican, or a conservative black, but a man.  It is his belief that only if or when America can get back to recognizing individuals as men and not as a “community” or a “class” or a “group” of oppressed people, will we ever be able to recover our historical morality where right is right and wrong is wrong based on natural law and the tenants of Christianity.


In this book is a chapter on his positive reaction to Clarence Thomas’s dissenting opinion in the case that questioned affirmative action in the Supreme Court.  Another important point was made by Steele regarding “the elite” in our country and their belief in the idea we can “create a new man.”  I can’t say for sure, but I suspect this is where we get the recurring phrase, “This is not who we are as a nation.  We are better than this.”


I’ve never felt comfortable with those words because it puts me in the collective, enclosing me with standards I may or may not always agree.  Who gets to say what “we” are?  In this case, for those who use that expression, mostly Democrats in my opinion, this means the new “social morality” that has replaced the old biblical version with its outdated standards and ideas of justice.


I am not a bigoted person.  I don’t like being labeled as one.  Neither am I comfortable being forced into a “new behavior pattern” of total “disassociation” from any form of rejection of what I know is sinful.  A white man could not have written this book and only a black man who at one time had been part of this post Lyndon Johnson Civil Rights Movement could, because as a man with black skin he cannot be called racist for speaking truth to error.
Terrific book!  Less than 200 pages.  Easy read.  Written plainly and in the most honest explicit terms so that when you are done you will have no doubt America has bought a giant lie and still continues to graze on its steady diet of white guilt. 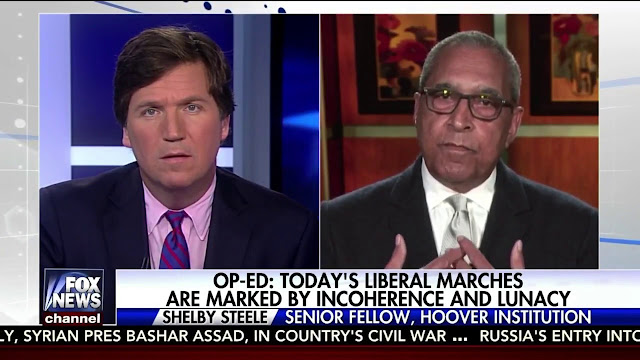