Out of the Shadows and Into the Light: Time to Call Out the Bad Bishops! 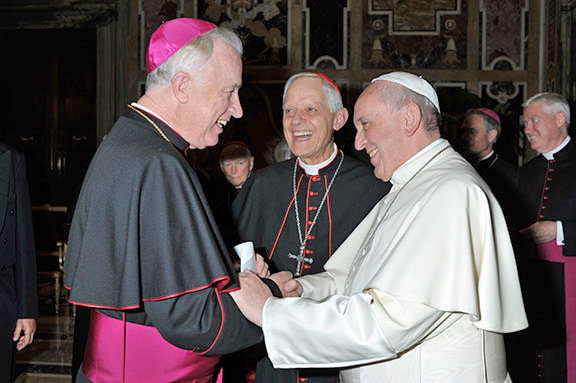 A few days ago I posted about Bishop Bransfield along with this same photographic moment taken from another angle. This one is much more interesting! Check out the man in the shadows where he has now gone permanently in disgrace, thank God. Yes, indeed, the kingmakers were there for Bransfield's first meeting with the Pope Francis in 2016 with rings on their fingers and bells on their toes and huge lavender mafia smiles.


Bransfield turned 75 a few days ago, Wuerl a few years ago. Let's pray accepting their resignations goes to the top of the pope's "To-Do" list -- although somehow I doubt it. It would make the laity happy, though.

I received an email in the wee hours this morning from a colleague who wrote, "The following is an eyewitness account from a Friend who works at the White House and who attends mass at the Cathedral of the Immaculate Conception at Chevy Chase [Circle], D.C."

Will be interesting to hear the fallout. He said he did not intend to attend the prayer service at the Cathedral that was published in the Post. He said it was window dressing. Said people should get involved in helping victims and getting the statute of limitations extended to priests would go to jail!

Fr. D'Silva is a retired priest serving at the Cathedral. Please pray that he does not get the guillotine treatment for his courageous action.
Posted by Mary Ann Kreitzer at 9:57 AM

The church is the Shrine of the Blessed Sacrament at Chevy Chase Circle. Its congregation is definitely not Traditionalist. If Cdl. Wuerl has lost them he is in big trouble. God bless Fr. D'Silva.