Following the Example of Daniel with Fr. Goring 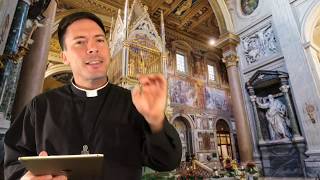 I am including a link to a short video featuring Fr. Mark Goring, featured above, further down this page.   Mary Ann posted another video of him yesterday.

It’s a long story, as they say in the old country, but she and I actually discovered him together.  The truth is we were stuck in a motel on the side of the highway on our way home from the bishop’s conference in Baltimore, where we were taking refuge from the snow storm. We had traveled to Baltimore for a rally and two receptions held in conjunction with the conference and had enjoyed a wonderful three days together when the weather went from bad to worse and had us wondering if we would make it home safe.
We left our hotel in Baltimore that morning with a light snow coming down but the roads were clear.  We hoped heading west we would avoid the worst, but the fact is we were headed right into it.  The ice was so bad on the windshield Mary Ann could not see and the roads were not plowed and stripes were impossible to detect.  Naturally, the 18 wheel trucks never slowed down and fear and trepidation told us to GET OFF THE ROAD.  So we took the next exit and checked in at the only motel at that location.  Let me just say, the proprietors were a lovely Indian couple who were very considerate and welcoming, but their facility is not one I’d choose in the future.
The only food we had with us was a short stack of chocolate chip cookies which had been given to us by a fellow Catholic the day before, and some left over peanuts from our reception, and several individual bags of Cracker Jacks. And that’s the truth.  Before it was over, the man who came to plow the motel parking lot offered to bring us food from Burger King.
While we were there in this two star lodging, for lack of anything better to do we resorted to our cell phones and lap tops for information and entertainment.  We sought first to see what had been posted about the conference that just ended hoping for articles with reactions from our favorite sources.  That’s when I ran across my first peek at Fr. Mark Goring.  I said to Mary Ann, “Listen to this guy!  He’s actually saying what we all know is the truth.”
When I got home, I listened to him again and clicked the subscribe spot to get daily posts from him. This video linked here was posted on Sunday.  There is something especially appealing about it to me.  I will let you decide for yourself if you want to participate in this, but his reference to Daniel and the lions is spot on with where we are today.  I don’t know where this will lead but I’m going to take up his suggestion and begin hitting my knees.  What better resolution could there be for the year ahead than a commitment to call on God three times a day and offer him thanks and praise.
Paul Harvey would give you the rest of the story, so I won’t leave you hanging.
Mary Ann’s courage was bolstered by the fact the snow changed to rain and her desire to sleep in her own bed that night versus the one at the Budget Inn led her and me to the conclusion we might venture out again for home without too much concern.  Well, we were in fact “concerned” for the next four hours, but make it home in one piece we did and Larry, GOD BLESS HIM, had the home fires burning and supper on the stove.
Turning in the driveway at Camp Kreitzer in the dark gave us both reasons to cheer and be thankful.
Posted by Chriss Rainey at 7:30 AM