No scene of the Nativity of our Lord would be complete without at least one shepherd and a few sheep, mostly lambs.  What makes this man of low estate and his wooly charges so important to the story that no matter what else is included, the shepherd is never omitted?


First, what do we know about shepherds?  I don’t pretend to be an expert in sheep rearing by any stretch of the imagination, but I have in fact known a shepherd.  Well, not a real “shepherd” shepherd, but a gentleman farmer who owned sheep and took care of them on his estate.  This property was in Northern Ireland and was actually on a small island in the western side of Strangford Lough, uninhabited by predator animals such as those that threaten sheep in other places.  This “shepherd” entertained a group of friends, which included several of us Americans, with his stories of sheep as we traveled together to a convention for daffodil growers.  (Another story for another day) 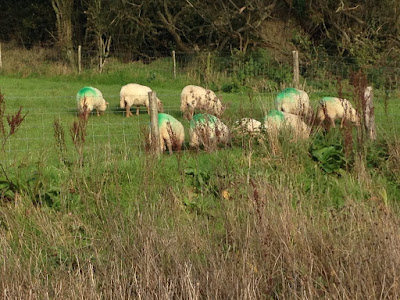 He told us for instance that male sheep are sprayed with a particular bright color of paint so that it is obvious which ewes have been mounted and by which male.  Once all the female sheep turn up with red or blue or yellow or green backsides, it is clear that the mating has been complete and the males can be removed from the flock.

He also introduced us to the expression, “Rattle your dags,” which means get a move on, or hurry along now.  This is generally said to a slow pokey person.  Dags it turns out are the dried poop that gets caught in wool at the rear of a sheep and can actually produce a rattling sound when the sheep begin to run.  (You can’t make this stuff up!)  One of the worst jobs, so we were told, is to remove this stuck on dung prior to shearing the animals.  Health problems can be involved in this dag business, but you probably know more than you bargained for already so I’ll move on with my shepherd’s tale. 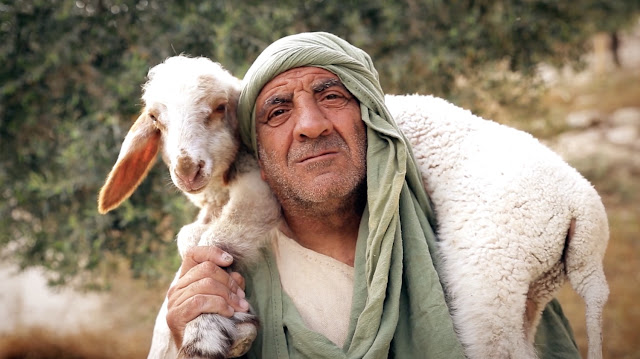 In the book, Daily Life in the Time of Jesus, by Henri Daniel-Rops, there is a whole chapter devoted to shepherds.  It’s one of my favorites in the whole book.  I quote:


“It might be supposed that looking after sheep would be an easy peaceable trade; and no doubt when there were only a dozen of them they might be entrusted to a child.  But it is clear from many statements in the Bible that some herds consisted of thousands, even of tens of thousands, and these bleating armies could only be entrusted to highly skilled men.  …………there were many who praised the excellence of the shepherd, standing alone there in the vast  open spaces under the sky, leaning on his crook and, like Amos, revolving prophecies, or, like David, poems.
“In fact, it was not at all an easy calling.  …. There would always be some who would wander off so far that the dogs could not bring them back, and then the shepherd would have to go himself.  Hyenas, jackals, wolves, and even bears were fairly common, and it was not unusual for a shepherd to have to do battle with wild beasts.  For this reason they were all armed with a solid, iron-bound cudgel and a large knife.
“For a lost ewe, a shepherd would feel the same anxiety as Christ for a soul in danger of perdition:  he would be in dread for it, would hurry out in search of it, and having found the ewe, would carry it back on his shoulders. “
In Chesterton’s book, The Everlasting Man, he says this about shepherds:
“Men of the people, like the shepherds, men of the popular tradition, had everywhere been the makers of the mythologies.  It was they who had felt most directly, with least check or chill from philosophy, ……the need we have already considered; the images that were adventures of the imagination; the mythology that was a sort of search; the tantalizing hints of something half-human in nature; the dumb significance of the seasons and special places.  They had best understood that the soul of a landscape is a story and the soul of a story is a personality.
“The populace had been wrong in many things; but they had not been wrong in believing that holy things could have a habitation and that divinity need not disdain the limits of time and space.”
Chesterton lets us see how it was the shepherd, who depended not on science and philosophy to understand the questions of the universe, but on his own imagination and hopes and dreams for answers to the vast unknown-----Who made us and why?
And so it was to the shepherds that the angels appeared bringing tidings of great joy.  The shepherds were keenly aware of the marvelous nature and beauty of creation, spending most of their days outdoors and sleeping under the stars. 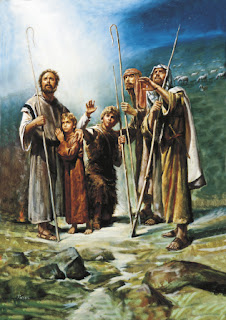 To these men the angel appeared and not to the learned architects and mathematicians of the cities.  It was the shepherds who had the faith to believe in what is not seen and trust in what they knew must be possible.


Luke 2:9-20
“Suddenly, an angel of the Lord appeared to them, and the glory of the Lord shone around them.  They were terror-stricken, but the angel said to them, ‘Do not be afraid, for I bring you good news of great joy for all the people.  For this day in the city of David there has been born to you a Savior who is Christ, the Lord.  This will be a sign for you; you will find an infant wrapped in swaddling clothes and lying in a manger.’  And suddenly there was with the angel a multitude of the heavenly host, praising God and saying, ‘Glory to God in the highest heaven, and on earth peace to all those on whom his favor rests.’
"After the angels had departed from them to heaven, the shepherds said to one another, ‘Come, let us go to Bethlehem to see this thing that has taken place, which the Lord has made known to us.’  And so they set off in haste and found Mary and Joseph, and the baby lying in a manger. 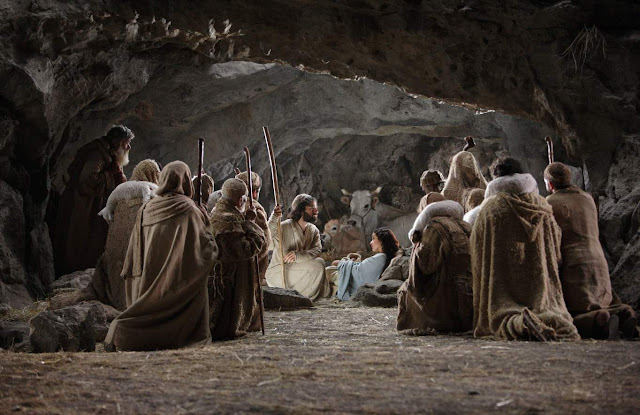 "When they saw the child, they recounted the message that had been told them about him.  All who heard it were amazed at what the shepherds said to them.  As for Mary, she treasured all these words and pondered them in her heart.  And the shepherds went back, glorifying and praising God for all they had heard and seen, just as they had been told.”