What Happens When You Take the Freedom Out of Liberalism 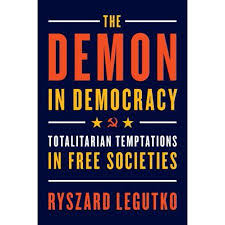 Occasionally I read a book that is rich enough in content to linger in my head long after I’ve turned the last page.  Others, while interesting, are less captivating and they fade from thought as fast as the smell of your neighbor’s steak on the grill last night.  When the message stays with you even weeks after you’ve put it down and you find yourself quoting from it, or referring it to friends, you know you have stumbled on a gem.

One such book that I read this summer is The Demon in Democracy, Totalitarian Temptations in Free Societies by Ryszard Legutko.  According to the back cover, the author is “a professor of philosophy at Jagellonian University in Krakow, Poland, specializing in ancient philosophy and political theory.”  In other words, Ryszard is no fly weight when it comes to having a point of view worthy of respect.

Further information about the author reveals the following:

Ryszard Legutko lived and suffered under communism for decades and he fought with the Polish anti-communist movement to abolish it.  Having lived for two decades under a liberal democracy, however, he has discovered that these two political systems have a lot more in common than one might think.  They both stem from the same historical roots in early modernity, and accept similar presuppositions about history, society, religion, politics, culture, and human nature.”

Let that soak in for a minute.  Reread it if you need to.  Then, listen to what follows:


“Both systems, says Legutko, reduce human nature to that of the common man, who is led to believe himself liberated from the obligations of the past.  Both the communist man and the liberal democratic man refuse to admit that there exists anything of value outside the political systems to which they pledged their loyalty.  And both systems refuse to undertake any critical examination of their ideological prejudices.”

This means a “liberal democrat” in society today in just about all countries around the world, including the USA, has put all faith in the politics of his party, a faith far deeper than any religion because it demands an unquestioning loyalty and a willingness to destroy anyone who dares dispute what it preaches.

We hear again and again that the left in this country is attempting to overthrow our president in a coup d’état.  That we are in a civil war----a war of “political systems”.  This is not simply the Republicans vs. the Democrats.  It is a struggle between the rights of the individual vs. the power of the collective to enforce its policy on anyone they choose.

Their interest is not in freedom, it is in forging a coalition of small bands of people who are willing to sell themselves into a kind of slavery for protection against anyone who disagrees with their behavior or attitude.  Take “the alphabet people” for instance—LGBTQXYZ.

This linkpoints out the danger in such an alliance for anyone who holds dear his God given rights and responsibilities as a human being.  The doctor in this story, a person of importance in his community who will no doubt be missed by many who benefit from his skill, is prevented from working because he refuses to abandon his religious beliefs.  Where will we all be if doctors can be fired for political reasons that have nothing to do with the practice of medicine?

This attitude is supposed to be bringing us closer to a utopia, but as Legutko points out,


“This grand design, its supporters say, should be implemented at all cost because it is believed to bring with itself freedom, autonomy, tolerance, pluralism, and all other liberal-democratic treasures.  If same-sex marriage means freedom, we should then compel its opponents to accept it and silence fools who may have doubt about it.  If political correctness is a necessity of life in the liberal-democratic society, then imposing it is, after all, nothing else but a measure of its emancipation for all.  The groups [LGBT] have exerted a disproportionate influence on the government to the extent that the state institutions, including the courts, have taken upon themselves the task of breaking the resistance of less conscious and more stubborn groups [that would be you and me] ---that is, coercing them to freedom.”  [This isn’t freedom at all, but tyranny and totalitarianism.]

I’ll end this with a link to a short clip of the liberal, Piers Morgan, expressing the point that liberals have become unbearable.  Have they gone so far they can’t even stand themselves anymore?  Let’s hope so.

Both the communist man and the liberal democratic man refuse to admit that there exists anything of value outside the political systems to which they pledged their loyalty.

Not exactly nuanced, is it? Do you believe in God? Do Evangelicals? Lut'rans? Baptists?

The author strips religion from the 'common man,' then proceeds to his conclusion. There's no question that liberal democracy CAN exclude 'value.....outside the political system.' But that won't happen in America for quite some time, no matter the striving of the Left.

Righties, after all, have lots of guns, if necessary.

Alexander Solzyhenitsyn made the same point in his Harvard speech which got him condemned by the same crowds that hailed his criticism of Communism. The liberal godless outlook on life is every bit as morally bankrupt as godless Communism and it is going in the same totalitarian direction.