From the Insanity File: St. Peter's Basilica to be Venue for Climate Change Ad! 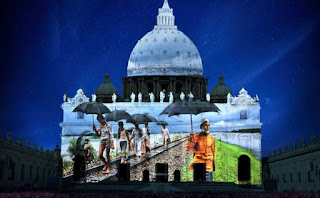 The author of this article has this exactly right when he opens writing:

The Catholic Church, founded to shed the light of Christ on the world, has quite literally invited the world to shed its light on her. On December 8, the Feast of the Immaculate Conception as well as the opening of the Extraordinary Jubilee of Mercy, Pope Francis has invited climate-change partisans and population-control advocates to project a light show onto the façade and cupola of Saint Peter’s Basilica in Rome — the most important church in the Catholic world — so as to “inspire change around the climate crisis.”...There is much dark and forbidding symbolism behind the event and the organizations sponsoring it that is bizarrely connected to pagan occult practices, the worship of nature, and human sacrifice through abortion and population control.

The show is titled “Fiat Lux: Illuminating Our Common Home.” “Fiat Lux” is the first command issued by God at the beginning of creation: “Let there be light.” Instead of the Church presenting Jesus Christ as the light of the world, secular organizations named after pagan gods are literally “obscuring” the Church through their own dazzling light show. St. Paul warns the Corinthians to be on guard about Satan who he says “masquerades as an angel of light.” It’s as if through this phrase the organizers are symbolically taking the place of God and creating the world anew according to their own image and likeness.

We truly are in the midst of an insanity that rises to the highest levels of the Church. When Obama allowed the rainbow flag to be projected on the White House, I thought that would be hard to top, but clearly Pope Francis supporting the population control advocates gets the "most outrageous antics" prize with this. In fact, it's downright evil, especially to do it on the Feast of the Immaculate Conception! But then it seems that to Pope Francis the greatest problems these days in the Church are "fundamentalist Christians" who believe in "absolute truth" and the evil rich (except those connected to the World Bank).

In this season of Advent I would have thought a light show depicting the Joyful Mysteries of the Rosary would be more appropriate. But what do I know? Only what Our Lady of Fatima called for -- "Penance, penance, penance!" Hang on to your rosary.

Posted by Mary Ann Kreitzer at 9:33 AM

Don't be surprised if rainbow lights are thrown into the mix.

Mary Ann It's really horrible. Life Site has pictures and when I saw the giant lion plastered all over the St Peter's Basilica and the statues of the apostles all I could think of was all the Early christian martyrs they converted and how they went to their deaths being torn apart by bears lions and baboons.
Not unlike the babies being torn apart in and outside of the womb!

Those are the pictures that should be up projected on the Vatican!
Shame on these UN politicians in priests clothes!

Absolutely, but we all talk too much about those issues when there are so many important ones -- like "climate change" and the problem of "fundamentalist Christians" who believe in "absolute truth." Relative truth is so much more merciful. It doesn't hurt the itty bitty sensitivities of the "whited sepulchres" filled with dead men's bones (and babies' dismembered bodies).

I keep mulling the prospect that this is the Image of the Beast we are supposed to be worshiping according to the False Prophet of the Apocalypse.

The Roman pagans brought those wild beasts from their territories in Egypt and other places Africa in order to kill Christians. The obelisk in St Peter's Square also came from Egypt, brought by the pagan Romans to symbolize their victories in war. A Crucifix was placed atop that obelisk to symbolize Christ' victory over diabolical paganism through His Sacrifice for our sake.
How odd the beasts of the field and the seas are now being honored again there, as if to flaunt a neo pagan victory before the Crucified Jesus!

I use to go to sleep peacefully after saying a Rosary. Of late I lay awake all night imploring Heaven and the thoughts above must be my poor sleepless brain trying to make sense of it all. Yet the Word of God teaches us too by heavily relying on symbols and signs.

I looked at those visuals projected on St Peter's Basilica and got a chill.

That huge lion that was projected over the the entire thing and the statues of the Apostles.

I thought about the early Christian martyrs, the obelisk in the Square that came from Egypt as did many of the wild animals that killed them.

Brought to Rome by the Pagans themselves.


The more things change ,the more they remain the same.