#Trinity-Betrays-Women: Ah Trinity, to be named for the Holy Trinity and to be such a Judas! 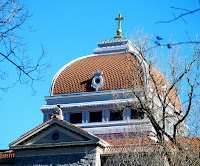 I graduated from Trinity College (now Trinity University) in 1968. Nancy Pelosi was about six years ahead of me. Even then Trinity was losing her Catholic identity. But today I received a petition from TFP Student Action saying Trinity promotes Planned Parenthood on the university website as a "resource." I always check things out so I went and looked. Here's the page. Don't you know, killing babies and selling plugs and drugs to fornicating students (all in violation of Catholic Church teaching) contributes to women's health? Tell that to all the post aborted women who are "silent no more."

I take no pleasure in Trinity's betrayal. In fact, it grieves my heart. My mom graduated from Trinity in 1939. How she loved the school! It was her greatest hope to have a daughter follow in her footsteps and study under the red-roof. When I told her several years after graduation the scandal I experienced at Trinity she was shocked.

I left Trinity and left the Church. After all, in moral theology I learned how irrelevant the Church was. Joseph Fletcher and Harvey Cox had the answers not Jesus Christ. Yes, I'm ashamed to say, I swallowed the Kool-Aid for a time; I was young, gullible, and thought everyone in a position of authority was telling you the truth. But the betrayal I experienced at Trinity just made me more zealous when I returned to the faith. And when our own kids were scandalized in Catholic high schools, I was on-the-spot fighting with their teachers and the principal.

I hope you'll sign the petition and pass this on with the hashtag #Trinity-Betrays-Women. They need to be exposed. Catholic parents considering Trinity for their daughters especially need to know that the school is no more Catholic than the local Planned Parenthood they support.
Posted by Mary Ann Kreitzer at 7:00 AM

They have an emergency contraception link which is only about post sex contraception. They simply assert that they are not responsible for what they post: " Always read critically. The Health and Wellness Center does not monitor or endorse the web sites listed below."
At some point though if you are losing joy and peace....fruits of the Holy Spirit over such crap, that means read about it less. These are all hings the last five Popes should have stopped...but none of them wanted to administrate from 8 to 5 everyday. Instead they wanted to write...and write....and write. Their power to administrate is " immediate" and "supreme" " over all the churches" in canon law. Instead they wrote too much and probably administrated one day out of five...or a alf day. Be careful....this chaos can threaten your faith if you stare at it repeatedly and the devil will like that.

Bill, I don't understand what you think "joy and peace" are. They come from obeying God, not by shutting out the reality of the world that is desperate for those to stand in the gap and speak the truth. We might feel uneasy about these things? So what? We, each and every one of us, needs to "man up" or "woman up" and take up that cross, not run from it. If such chaos is threatening to faith, one must realize that the faith was fatally deficient to begin with.

No one will be able to shut out the chaos. We must stare it down, stand and fight. If we don't, it will come crashing through our little paper-house hideaways.

I stand by what I said. I emailed the president of Trinity and noted that she is forcing God to be severe with her if she does not monitor her ads...and I told her of God using illness on me to correct me. I did something about the Trinity situation. But for bloggers to look at these things too much will sadden them so that the fruits of the Holy Spirit will be attacked. Joy and peace are in fact joy and peace not the satisfaction I felt in emailing her. If you look constantly at what should be stopped by Popes and what you cannot stop by blogging, then you will gradually get in a dark place. These things like the married gay teaching at Fordam could be stopped with a phone call by a Pope but Popes are not doing it for decades.

Have you stopped one thing liberal Catholicism is doing? These are scandals that only a Pope could stop with one phone call threat.
If the next Pope is from Africa and makes such phone calls....fine. But no one beneath Pope level can stop such things by writing.. Satan loves seeing Catholic orthodox spinning their wheels because that means you're neglecting something healthy that God wants done. I'm sanding burnt crude off a frying pan to give it to Sisters of St. Joseph who will give it to a resident of their homeless shelter when she leaves them for the world. Beware stareing at evil that you can't fix. It's like heroin.

I appreciate and agree with much of what you are saying, Bill, but there's another aspect here -- that of scandal. A priest once told me that if you can't stop a scandal the next best thing is to shine light on it.

There may be Catholic parents out there considering Trinity not realizing that her Catholic identity has collapsed. (Like my mom in 1964) This is a trumpet call to them. Your email to Pat McGuire likely fell on deaf ears. I've written to the alumnae journal over the years and they never printed my letters. Nancy Pelosi is Trinity's darling and they would never let a sour note sound in their symphony of praise.

So I will continue to write about things I cannot change if I believe that it's necessary to blow the warning trumpet. I will always try to do it offering a note of hope as well.

Just watch your joy level as time goes on. Christ withdrew from the fray a number of times to replenish. Bloggers....are on a non stop cycle.
Watching sins in the Church can slowly overthrow the soul because they will continue. By the way, an orbital sander can remove old black finish on a frying pan bottom.

Oh, I think bloggers can withdraw. I go on a five day Ignatian retreat every year and handle my blog by leaving automatic posts. Jesus didn't withdraw for long and sometimes when he did he would embark from the boat and find the crowd waiting. So I leave it all in the Lord's hands and in Our Lady's. Fr. Hardon is my model. When somebody asked how you know when you are doing enough, he answered a question with a question. How tired are you?

Having said that I make sure I go to Mass every day and pray the daily rosary. And we square dance. There's nothing like square dancing to add a little joy to your life and the nicest people are square dancers (for the most part). Thanks for the advice on the frying pan. We all need orbital sanders in our spiritual life it sounds like. LOL!

Christ did not withdraw "from the fray to replenish". He withdrew to pray and commune with His Father. The difference between the two is huge. What we bloggers do is an extension of our spiritual lives and resultant obedience (or attempts at such) to God. Of course we need the graces available through prayer and the sacraments. I don't know where this "bloggers are on a non-stop cycle" idea comes from. You seem to have a problem with us.

As Mary Ann said, while we may not be able to stop all the evil (and yes, we have stopped some), we can shine some light to prevent others from being victimized by it. I think John the Baptist realized that he was not going to convince Herod to give up his adultery. But he realized he had a duty to offer his public rebuke anyway. I know of no one who thinks he was tilting his spear at a windmill.

I do, to and extent, share bill's concern about be robbed of our peace and discouragement that can be all to easily found on some sites. Candidly, I stopped going to Mundabor and Ann Barnhardt simply because of the harshness which repels me. OTH, this site and Dymphnas and Rorate Caeli I find very eve and... sincere. The comments on some sits are to be avoided, IMO, too.

However, we simply have to make up our minds to get in to the line of batter and keep confronting the evils we see in Catholic institutions. There is not alternative.

"To recoil before an enemy, or to keep silence when from all sides such clamors are raised against truth, is the part of a man either devoid of character or who entertains doubt as to the truth of what he professes to believe. In both cases such mode of behaving is base and is insulting to God, and both are incompatible with the salvation of mankind. This kind of conduct is profitable only to the enemies of the faith, for nothing emboldens the wicked so greatly as the lack of courage on the part of the good." - Christians as Citizens, 1890. Pope Leo XIII SAPIENTIAE CHRISTIANAE ENCYCLICAL