Have a Politically Correct Non-White Christmas 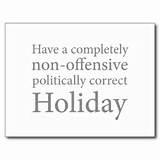 Some things are so ridiculous you can hardly believe anybody would fall for them. (See the video below.) Stupidity is rampant on college campuses where feelings trump intellect and students have a right to be protected from the "micro-aggression" of words that might offend them.

Come to think of it, didn't a high level Vatican official recently say that words that hurt used against the pope are the same as violence against his person, an offense that incurs excommunication? Archbishop Fisichella addressing reporters in early December talking about the year of Mercy described offenses against the Holy Father opining:

“I would say that we need to understand well ‘physical violence,’ because sometimes words, too, are rocks and stones, and therefore I believe some of these sins, too, are far more widespread than we might think.” (source)

Looks like the Vatican has joined the club of the sensitive and politically correct. Hopefully they have a safe space at St. Peter's where the victims of word aggression can gather and commiserate. No doubt Archbishop Fisichella will be there to offer comfort and compassion and bind up hurt feelings. Just call him the Good Samaritan. As for the students who signed the bogus petition...well...well...I'm speechless.

Which proves that some people can be educated into imbecility. We have plenty of those in this state.